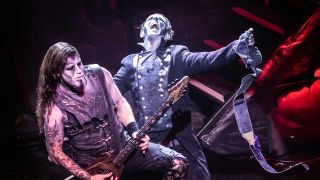 It’s a warm, moonlit summer’s night and something weird and wonderful is going on in Graz, Austria. We’re at Napalm Records’ annual Metal On The Hill event; a festival that takes place in a fortress on top of The Schlossberg, a tree-covered hill in the city centre. Tonight’s headlining band are serving up one of their biggest hits beneath the twinkling stars and roughly 1,500 people are singing along, passionately and in perfect unison. The weird part is that the song in question appears to be about defying death through the power of an erect penis.

The band performing this song are, not unreasonably, visibly delighted by the ecstatic and noisily vocal response. No amount of menacing corpse-paint can disguise the broad grins plastered across their faces. Meanwhile, their frontman – who looks like a mad monk from deepest, darkest Transylvania - is flamboyantly conducting the sing-along, arms spread wide in triumph and eyes gleaming with mischief.

This is all complete madness, of course, but it’s also irrefutably, irresistibly joyful: there is not a single grumpy face to be seen anywhere, and that remains true right until the end of Powerwolf’s set. Surrounded by vast amounts of fire and a dazzling light show, the five-piece conclude with a seven-minute gothic metal epic about an infernal cult of wolves, with lyrics sung partly in Latin, and the entire venue goes righteously berserk before filing cheerfully out when the house lights come on. Even the most cynical of critics would be obliged to conclude that whatever it is that Powerwolf are doing, a lot of people really fucking like it ‘round these parts.

It may not have reached most UK radars, but the biggest story in heavy metal this year should be that Powerwolf are absolutely fucking massive in Europe right now. 15 years after forming in 2003, power metal’s resident square pegs have not just surpassed expectations but smashed them to smithereens with a giant crucifix.

Already one of power metal’s biggest bands by the time they released of Blessed And Possessed in 2015, Powerwolf have moved swiftly and unassailably upwards over the last couple of years, particularly in their native Germany and neighbouring Austria and Switzerland. 2018’s The Sacrament Of Sin album sealed the deal, shooting straight to number one in the official German album charts, not to mention breaching the top ten in Austria, Switzerland and Belgium. Even more remarkably, and this is extremely rare for a metal record, it remained in the German Top Ten for a further two weeks, only dropping a handful of places in its fourth week.

Meanwhile, Powerwolf are now routinely selling out arenas in this part of the world and are increasingly in demand in the US, despite barely having toured there. While many metal bands enjoy a degree of mainstream success in Germany, they seldom do it like this. Whatever that magical, impossible-to-define thing that turns mortal men into megastars is, Powerwolf seem to have it.

Away from the bright lights and flame-shrouded chaos of the stage, Powerwolf co-founder and guitarist Matthew Greywolf is clearly struggling to find a balance between being down-to-earth and humble and jumping up and down with glee at his band’s triumphant last few months. While he insists, not unreasonably, that all their achievements have been earned with hard work and determination, he is also quick to note that Powerwolf are truly living out their adolescent heavy metal fantasies at the moment.

“Let’s say that when we began, all of this was a dream!” he grins. “We were pretty ambitious in the beginning, and at every point in our career we always did the maximum that we could. I remember the first tours we played, as a support or opening band, we even brought our own light truss, just in case we couldn’t use the headliners’ lights. We’d set it up our ourselves. We had no crew, we had nothing. So we went through a lot of insanity until we realised the vision we had at the start. It’s pretty important for any band to have that vision.”

After many years of hard slog, Matthew bristles slightly at the idea that Powerwolf have suddenly become successful. He does concede that 2018 has surpassed everyone’s expectations, but maintains that conquering the mainstream charts was never a primary goal.

“This success is a surprise and it’s great, of course, and I’m happy for our management and label and for us it’s nice too. But if I see a 12-year-old kid freaking out and it’s maybe one of their first concerts, that gives me goosebumps. That’s better than someone calling to tell us we’re number one. It’s the moments I share with the band and the audience, that’s what it’s all about.”

Watching Powerwolf performing at Metal On The Hill, the extravagance of their current stage show is plainly the result of what happens when a band with tons of great ideas becomes financially able to put them into practise. The vision that Matthew refers to is becoming more potent and fully realised by the day: with Attila Dorn as macabre, priestly MC and keyboard maestro Falk Maria going on regular crowd-baiting walkabouts, Powerwolf have two deeply engaging focal points to balance out the eye-frazzling pyro, while the insanely catchy nature of the band’s songs ensures that fans sing along with everything (but particularly songs about erections) and truly feel part of the show.

More importantly, none of it seems forced. Attila’s banter with the audience, even in a language that Team Hammer shamefully doesn’t understand, is so relaxed and natural that even non-German speakers are chuckling along. There is, it has to be said, a really positive and uplifting vibe around this band and their rise to glory, and it’s infectious. According to Falk Maria, the secret to Powerwolf’s hard-won success comes down to one thing.

“It’s friendship!” he states. “If you want to start a band, don’t look for musicians, look for friends. Our friendship would have existed even without the band, the success and everything around it. God knows, we’re not the best musicians, but that's not what makes the character of a band. You need a tangible team spirit, magic, not technical perfection. Every time I enter the tour bus it feels like I'm going on an excursion with my best friends - that's how it should be.”

“It sounds like a cliché but we’re family,” Matthew agrees. “We’ve gone through marriages, divorces, deaths, births, everything, over the years and we’re way more than just a band. That’s one of the things that’s also important when we go on stage. I’m pretty sure people can recognise if you’re just doing a job or if it’s a bunch of good friends having a good time together. That’s what makes a band. Sometimes you have arguments, of course, I would never question that this is the right band for me, because it’s my family.”

Also more than delighted with the success of The Sacrament Of Sin, Napalm Records label boss Thomas Caser believes that Powerwolf have been heading towards this level of popularity for some time. As he explains, Napalm picked the band up for 2013’s Preachers Of The Night album, having identified them as a band with the songs, the image and the collective motivation to fulfil their self-evident potential.

“Their concept is bulletproof, isn’t it?” he says. “For us it was the concept and the music. They were the first power metal band wearing the costumes and the corpse-paint. For a label it was the perfect situation – to have something like that and make it big. They have had consistency over the years and bands rarely have that. It’s difficult to maintain the same line-up. For the transition to something really big, everyone needs to be on board. It’s why they have so much success. But nothing is staged or planned, it all just comes naturally for them.”

“The last album was really successful but the success of this record was still a surprise,” adds Markus Riedler, Napalm’s founder and CEO. “Because it has done really well in a lot of territories, including places that we didn’t expect, including in the States. Powerwolf are doing so much better in the US than many bands that are constantly touring over there. So that just shows you the quality of what they deliver. They re-invest the money they make, and you can see that in the stage show. The last tour was sold out and the next tour will be sold out and I think that’s why. They deliver.”

Right now, there are few bands flying the flag for unapologetic, over-the-top and wilfully bombastic heavy metal with quite the same enthusiasm and verve as Powerwolf. With Sabaton newly announced as a Bloodstock headliner for 2019, it’s not hard to imagine the Germans following swiftly in the Swedes’ footsteps. Judging by their headlining show at Metal On The Hill, metal’s chief wicked wolves are more than ready for even bigger and better things. They are explosive. They are ludicrous. They’re funny. They’re fun. And Satan only knows, we could all do with a bit more of that right now.

“Of course we’re super serious about what we do, but for me a certain spark of humour is just essential,” Matthew concludes. “The humour shows that we’re not preachers. We get a lot of questions, like ‘Are you Christians or Satanists?’ I mean, come on guys, please! We have a song called Resurrection By Erection, you know? Ha ha! The lyrics should give you a certain perspective. Let’s just enjoy ourselves, you know?”