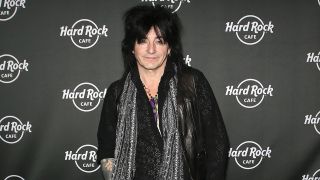 Philip Lewis was playing a rock star called Snake Hips in a Rotterdam fringe theatre group when he met future Girl bandmate Gerry Laffy and decided to pursue the same role in real life. After spells with the New Torpedoes and Bernie Tormé’s Electric Gypsies, in 1987 singer Lewis relocated to America to join L.A. Guns. Now, after 14 years of acrimony, Lewis and Guns guitarist Tracii Guns are reunited on a new L.A. Guns album, aptly titled The Missing Peace.

Whereabouts in London were you born?

Queen Charlotte’s Hospital in Hammersmith. I had quite a Dickensian childhood. My mum died when I was young and I was raised by a wicked stepfather, who was sometimes away on Her Majesty’s Pleasure.

How did being privately educated affect how you became?

I was in boarding school from seven to sixteen. It was pretty isolating. Leaving school was pretty much the beginning of my life.

Could you have pursued an acting career?

The theatre group did ask me to stay on, but by that point music meant too much.

Girl were signed to Jet Records by the notorious Don Arden.

Yeah. At first, although we looked good, we were not a great band, but people were talking about us because I was spending time with [actress and future Bond girl] Britt Ekland. So Don gave us the ‘rich and famous’ contract: if you get famous, I get rich.

During an early club tour, Girl travelled in a white Rolls-Royce Silver Cloud belonging to Ekland. Did you use arrogance as a marketing tool?

Turning up at smelly pubs in a Roller? Of course we did. But the arrogance was a big show. We didn’t think we were that good. In fact, with the exception of Phil Collen [who went on to join Def Leppard], we were fucking terrible. The whole thing was a huge bluff.

I was relieved. Girl was a poem, not an eight-part novel.

After trying again with the New Torpedoes and Bernie Tormé, you moved to the States to find stardom. Did that leave a sour taste?

Yeah. It was irresponsible of the British labels to not take a chance on [Tormé’s band] the Electric Gypsies. That was chickenshit of them. I had learned so much from Bernie but he was ready to fire me. He’d already spoken to [Quireboys singer] Spike about replacing me when I got the call from Tracii Guns.

You later said: “When I joined L.A. Guns they so badly wanted to be Girl.”

Tracii, Izzy Stradlin and all of the Guns N’ Roses guys were big aficionados, which spoke volumes as those albums were import only in the States.

Some people assume I’m posh. But I don’t come from money. I’m a self-made man and my life has been a great adventure.

When L.A. Guns’ second album, Cocked And Loaded, sold half a million copies how did it change you?

Coming back to England with a gold record under my belt was a little bit of a ‘fuck you’.

Do you consider yourself to be English or American?

Great question. As of my last birthday [his 60th] I’ve spent more time in the States. I got a Yank passport in 2003 but I’m not interested in dual citizenship. Visiting [the UK] is lovely but I’m not coming back.

What can Philip Lewis do that nobody else can?

Get away with murder.

What’s the best advice you’ve been given?

To get a vasectomy. Being in a band, you need the snip. Having a kid that you don’t want can fuck up a career.

After more than a decade you’re working with Tracii again. Are you really reformed characters?

Yeah. Both of us are parents, and that changes people. We had a bad falling out, but it was so long ago that I’d forgotten what the problem was. Why hold a grudge for that long? We’re still the same brats, but the feud was stupid.

Which actor would you like to portray you in a film of your life?

I think there’s an afterlife. I’ve led a charmed life, because I understand the importance of charm. Ultimately one makes one’s own heaven or hell – you can choose.

The Missing Peace is released on October 13 via Frontiers Records.