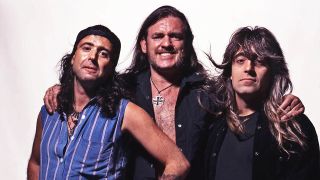 Campbell, Lemmy and Mikkey Dee in 1995

It has. With Lem’s passing, for the first three months at least I was just in shock. After that it’s still been really emotional. On the internet, if I see a picture of him, I still kinda break down. But you have to carry on. You have to think of the good times. We created a fine legacy of music. But I miss him every day. It’s ridiculous, really.

How difficult was the decision to end Motörhead?

You could never have Motörhead without Lem. It would have been stupid. It was simple. It wasn’t even something we thought about.

Have you had a lot of messages from fans?

Yeah. The outpouring of grief and sympathy after Lem passed away was overwhelming. I don’t do much social media, but I got a Twitter account, and it was all positive, really touching. They still talk about Motörhead and Lem. It’s not forgotten.

How difficult have you found it to readjust to life without Motörhead?

There’s definitely a big hole, not playing with Motörhead, not seeing Lem and the boys. I’m concentrating now on my band with my kids. We’re called Phil Campbell And The Bastard Sons. We did Wacken and Bloodstock and we’re supporting Saxon in Europe. We’ve got a self-titled EP coming out November eighteenth on Motörhead Records. It’s therapeutic. And we still play some obscure Motörhead songs – ones that you don’t expect. You’ll have to come and see us. I’m not going to give any secrets away yet.

We’re a party band. Same as Motörhead. We were a party band of sorts as well. People just used to come and get drunk and have a good time.

Yeah, he’s busy. He’s joined the Scorpions full-time now. I saw him the other week. He’s happy. He always liked the Scorpions, so that’s good for him.

So there have been some good moments among the sadness this year?

Yeah. But there’s been some good people passing away as well. Jimmy Bain. Nick Menza. All really good friends of mine. I suppose as we get older these things are going to happen more often. That’s just a fact. I don’t think 2017 will
be any better, to be honest.

What do you remember about Lemmy’s funeral?

I couldn’t go. I was ill at the time and my doctor had told me I couldn’t fly. So I put my Motörhead T-shirt on and I watched it. I thought it was great that the fans could see it. That was what was cool about it – not all the famous people turning up. I think it gave the fans a chance of some closure as well.

Phil Campbell And The Bastard Sons’ self-titled EP is out now on Motörhead Records.

The A-Z Guide To Motorhead

How Motörhead's Snaggletooth was born