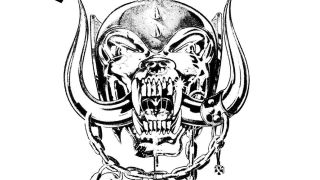 Lemmy’s death may have made the world a much quieter place, but his band’s legacy is immortal. On a week where they were scheduled for yet another UK tour, we take a look at the birth of their logo and how it stands at the centre of Motörhead’s very being.

While there is no doubt that, since 1975, Motörhead’s music has been as impactful as a battering ram to the testicles, it has always had a fanged, snarling accomplice that, without whom their no-nonsense, rebellious mantra wouldn’t be the same. Appearing in different putrid, devilish and dastardly guises over the years – on album covers, merch and beyond – Snaggletooth has taken on a life of its own. It is more than just a logo.

“Snaggletooth was of paramount importance,” says Joe Petagno, creator of Motörhead’s unmistakable logo on how its leering omnipresence tied into the band’s legacy over the years. “It was shocking and made people stand up and take notice, made them want to check out the music, first through the eyes, then to the ears, so to speak.”

Ever since receiving a pack of Crayola crayons at the ripe age of three, calling them his “favourite toys,” Joe Petagno had his eyes set on art. It was a gift that gave his life guidance and it was his venturing down that path that, some years later, led him to a London pub with a man called Ian Fraser Kilmister. Petagno had just finished his work on Led Zeppelin’s soon-to-be-infamous Icarus logo and was working on some illustrations for Hawkwind. Lemmy, who was fresh from leaving the band, called upon Joe to lend his artistic talents to his new band, Bastard.

“We discussed matters over a few drinks,” he reflects. “He wasn’t clear on exactly what he wanted, something like a knight or a rusty robot as I remember, a biker patch that could be displayed on the back of a denim vest.

“On the way home I stopped off at the library in Chelmsford. Taking my cue from outlaw biker patches, I was looking for skulls and bones when I inadvertently came across a book of animal skulls, then it hit me; an animal skull would work better than a human skull. When I got home and began sketching, I thought; why not invent a new skull, a hybrid? I started playing around with mix and match sketches dog – lion, wolf and so on. In the end I settled on a dog or wolf and gorilla cranium and gave it over-sized wild boar teeth. I hung a chain from the horns left to right under it and a small human skull to designate size, adorned it with an iron cross as a sign of bravery and then topped it off with a few spikes.

“When it was finished, I knew I had created something unique and timeless in Snaggletooth. It was the ultimate anti-everything symbol. I look at it this way, there’s is an inherent urge in most individuals to shout and be heard above the din and frenzy of life, and Snaggletooth is a great symbol for standing firm, resisting, rejecting, refusing and rebelling against anything and everything that is detrimental to one’s individuality.”

Symbolically, it is the perfect visualisation of everything the band was founded upon and stood for. A potent, filthy and ear-piercingly loud concoction of punk and blues – two genres birthed through protestation and rebellion – here was a band standing up for what they believed in and deafening you in the process.

What Lemmy had wanted was a biker patch, something to be sewn on the back of denim jackets that represents a brotherhood of likeminded individuals. Even today, at any gig or festival, Snaggletooth’s salivating grin can be spotted on shirts, jackets, shoes, hoodies, hats, tattoos and more.

“For me,” he concludes, musingly, “Snaggletooth and the imagery that surrounds him is just as important to the band’s legacy as the music itself; much like what we see with Iron Maiden’s Eddie and Megadeth’s Rattlehead. In fact, I would go so far as to say that Snaggletooth will no doubt outlive the music by millennia. It doesn’t take much fantasy to imagine groups of militant malcontents years in the future waving their Snag Banners high.”