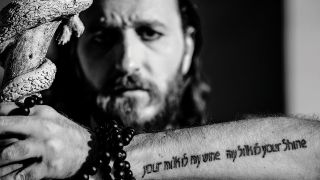 Even in the multifaceted realms of prog rock and metal, Orphaned Land stand apart. Formed in Israel in 1991, the band draw upon influences from East and West for their politically and religiously charged songs that aim to bring a vision of unity to a corner of the world where that’s in very short supply. Never ones to do the expected or conventional, they held the first press date for their new album Unsung Prophets & Dead Messiahs in a Berlin mosque.

“That mosque is exceptional because it’s run by a woman,” says frontman Kobi Farhi, chatting to Prog while in London. “She has a lot of death threats and she doesn’t move anywhere without bodyguards, but I thought that this is something I want to support. She represents something that the new album also talks about because it talks about Dead Messiahs & Unsung Prophets – revolutionaries who ended up dead – and I thought she was a living example of these people.”

The idea behind the new release comes from Plato’s Allegory Of The Cave, written over two millennia ago, but which Farhi believes is just as relevant now. “How many revolutions have occurred?” he asks. “How many wars? And we’re still facing the same problems. This is why we chose the concept of …The Cave, because people don’t want to leave the cave. They’re afraid of the light and they don’t want to change. Every time a revolutionary man comes to take them out of the cave, it could be Jesus Christ, Mahatma Gandhi or Che Guevara, they’re all assassinated. How can someone kill Mahatma Gandhi? Was he a dictator? Dictators live forever. Only the good die young. That’s the meaning of this album.”

In addition to Ancient Greece, Farhi found inspiration in the form of Kim Kardashian. He explains this unlikely pairing of philosopher and celebrity: “Did you know that every year 70,000 kids are kidnapped in India for the purpose of paedophilia, trading their organs, or making them become street beggars for money?” he asks. “And we don’t hear about it. Do you know who Kim Kardashian is? That alone should make you think: ‘Why is that the situation?’ I don’t hear about those kids and I hear about Kim Kardashian every week. What’s the purpose of dealing with her while something so important doesn’t come before our eyes? I see her as the shadows in the cave and I see the kids as the truth outside.”

Farhi says he naïvely believed he could change the world when Orphaned Land was born, but after 26 years of writing, touring and recording, he’s changed his expectations. Now he just wants to make people question the world around them. “I just thought that I should let people think that there are prophets even in our times because George Orwell, Aldous Huxley, they were like prophets,” he says. “I always dream and try to make the world a better place. I could think about myself and make a song about my girlfriend who just left me, but it’s probably a part of me to sing about the world.”

Unsung Prophets & Dead Messiahs features a guest guitar solo from Steve Hackett on Chains Fall To Gravity. They met when Farhi sang on Hackett’s The Night Siren. “He was writing a song about the Middle East,” says Farhi. “He wrote to me asking if I could sing on that song and if I could bring a friend of mine, an Arab singer, to sing as well. I was very flattered. Steve Hackett, man. That solo in Selling England By The Pound, what a solo.”

Farhi called up Mira Awad, the Arabian vocalist who appeared on Orphaned Land’s All Is One, and together they sang on Hackett’s West To East. “He basically asked me, ‘Do you want to get paid or shall I record on your next album?’ I said, ‘Steve, I will forget about the money in two weeks, but the solo will be there forever. Of course I want the solo.’”

The other two guests on the album are At The Gates’ Tomas Lindberg and Hansi Kursch from Blind Guardian. Hansi sings on Like Orpheus, which describes the moment the hero leaves the cave and ventures out into the world for the first time. “In Greek mythology they say Orpheus’ singing was so beautiful that even the stones liked his voice: Hansi is a modern Orpheus for me. His voice is amazing,” says Farhi. “Tomas sings on Only The Dead Have Seen The End Of War: it’s the song where they kill the hero and I needed the voice of a lunatic, a crazy guy from the cave. The guests on the album are just perfect, the roles they play and the way they executed it.”

The new album, like its 2013 predecessor All Is One, was recorded across three countries. The choral voices come from Hellscore, the Israeli choir run by Noa Gruman, the singer for prog metal band Scardust, while all the orchestral parts were recorded in Turkey. “You hear the violins, no orchestra in the UK can play like that because the scales they use are so progressive, it’s like quarter tones,” says Farhi. “The West will be very linear, while the East will be wavy and they do it in such a terrific way in Turkey that I have to travel there and pay a fortune for them to play it, but I can’t think of anyone else doing it.”

Farhi’s vocals and the drums were recorded in Sweden, the rest of the instruments in Israel, and back to Sweden for mixing. That meeting of East and West elegantly illustrates the range of influences that inform Orphaned Land’s music. It’s a diversity that extends back into Farhi’s youth and the soundtrack of his childhood in Israel. “It’s a combination of listening to the muezzin singing Allahu Akbar, to my father and grandfather listening to Italian operas by Puccini and Verdi, my grandmother listening to classical, my mother listening to The Beatles, myself listening to Iron Maiden or Metallica, Pink Floyd or King Crimson,” he says. “You have to think about the country. The majority of the people are Jews, but they came from all over the world. You have Moroccan, Iraqi, Yemenite, Iranian, Egyptian Jews and then you have Russian, Belgian, French, you have 80 different kinds of Jews bringing their own mentalities and habits, food, sounds, the way they look.”

Between them, the five members of the band trace their roots back to the Balkans, Morocco, Romania and Algeria, Egypt and Tunisia, and the Kurds. “Everyone one of us has different food in their house, a different language for their grandparents, and sometimes different music,” says Farhi. “You get those together, that’s a fusion, that’s progressive music. That’s a progressive life and a very rich life.”

“What is life, basically? It’s a mixture of our happy and painful moments,” says Farhi, explaining the contrast between his lyrics and the band’s exuberant performances. “When our mother gives us birth it’s the most wonderful thing, life is created but with screams of pain. Especially in the Jewish tradition, happiness, crying and sadness, they’re always connected.

“When you get married in Judaism, you break a glass because Jewish people say you should remember the destruction of the Jewish temple even on your happiest day. If we play a song like Brother or Let The Truce Be Known, there is nothing happy about it. If we play Norra El Norra or Sapari, which is a Jewish traditional, those are uplifting. I get a lot of comments saying, ‘I had a tear in my eye when you sang Brother or Let The Truce Be Known.’ If you can dance on a table and shed a tear at the same show, then that’s a perfect show for me. The greatest thing is to see people from different backgrounds, Jews, Muslims, uniting and celebrating. That’s the best.”