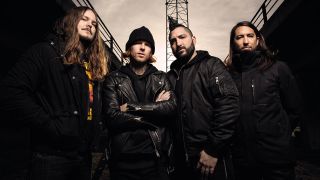 Aaron Pauley is in a good mood today, but we can’t help detect a wariness in his voice. It’s been just over a year since former lead singer Austin Carlile left the band due to complications with the genetic disorder Marfan Syndrome, which dealt one hell of a blow to the Orange County outfit and something that they’ve been working to overcome.

With Austin gone, it was up to Aaron to fill that void as frontman and take on the overwhelming pressures that the role had waiting for him. In April 2017, just four months later, OM&M dropped their banner-waving single, Unbreakable. It hit social media like a sledgehammer to your mum’s favourite porcelain cat. Undeniably one of their most well-received singles for a while, the heaviness they unleashed took a lot of people by surprise. The band were going big and going fast right out the gate. Was it a statement that they were still a force to be reckoned with?

“For us, as much as that song was to show the world that we’re still here, a lot of it was about showing ourselves that we’re still here,” Aaron explains down a phoneline from their dressing room in Berlin’s Velodrom arena. “Change is not easy and change can be frightening. I would be lying if there wasn’t any apprehension, [it wasn’t] like, ‘Yeah, we’re just going to go out and crush this,’ because we didn’t know what the future held.”

The track would become the first release from their new record, Defy, its title another strong declaration of intent. Whereas Defy is full of massive hooks and bold beatdowns, it’s a stark contrast to 2016’s dark and serious Cold World, an album made while Austin was suffering from medication withdrawal and recovering from surgery. Aaron started writing for it just a couple of weeks after Austin left, and they went into the studio with producer Howard Benson (Motörhead, Papa Roach) in March, picking up again at the end of July.

“This was the antithesis of making Cold World. That was a very sad and dark time for us, but this album was the opposite,” he says. “I made sure that I was telling our story, because it’s never been my story, it’s always been Of Mice & Men, not Of Mice & Man.”

As well as being one of their most difficult albums to make, Cold World marked a commercial dip for the band. It reached number 91 in the UK charts compared with 17 for 2014’s Restoring Force, and number 20 on the US charts compared with 4. They also toured in smaller venues as well as having to cancel a number of shows on that album’s cycle. Recollecting one of the hardest periods in the band’s history, the weight of the conversation becomes steadily heavier. Aaron remains cool, though we detect a vulnerability that he may be trying to conceal.

“You know, I think the real reason is because we had to slow down,” he explains. “Around the end of 2015 into 2016, Austin’s health really took a turn. For us, he was priority number one, we’ve always put family first in our band. It became impossible to tour as rigorously as we were doing on the Restoring Force cycle, or to write any energetic music because of the toll it was taking on his body. We slowed down and that was a conscious decision. That’s why this record is very energetic, and it’s a very reinvigorating album.”

He isn’t wrong. Defy is clustered with an array of diverse sounds that range from the million-kiloton brain-smasher Warzone, to the solemn, Chester Bennington-inspired If We Were Ghosts. Despite lacking Austin’s input, Aaron insists it’s been pretty much business as usual for the band. But lyrics like: ‘I won’t fade away… I refuse to walk into an early grave’ from the title track make us question whether his subconscious was subliminally referring to their former vocalist.

“You know what? You’re the first one to think that,” he chuckles. “But that’s cool, music is supposed to be individually interpreted. I wrote it when I was watching something on TV about the opioid epidemic, which really hits close to home. Reading it back, I think it doesn’t just have to do with opioids or that industry, it can do with anything or anybody that’s trying to defy you or to suppress you. That’s what really that song applies to.”

The frontman has been on top form as we delve deeper than he may have been expecting. However, when we wonder if this album was written to appease a more mainstream market to keep up the band’s momentum, it stops him in his tracks.

“No, no, not at all! Actually, that’s the first time someone has said that, because from Cold World to this, it’s a very heavy record. I have to disagree with you there.” His passion for the album is clear, though he sounds a little defensive. “I think that element just comes from just the level of fun and level of excitement that we’re at now. Don’t get it twisted, you’ll come to a show and you’ll bang your head.”

They’re trying to keep that momentum up with everything they’ve got. As we speak the band are busy supporting Five Finger Death Punch on their European run, and tonight in Berlin they’ll be playing to some 12,000 people. Back playing arenas and earning the respect from one of metal’s most devoted crowds, their campaign is clearly heading in the right direction.

“This is just the beginning,” Aaron tells Hammer, shifting to a lighter tone. “It’s just awesome – we love the Five Finger camp, we love their fans. They’ve been super-receptive to us and people are really paying attention. The less we worry about the future, the less we have to feel like we have to meet that expectation. We like to focus on every show, every song and every note we’re playing, and go wherever we want to go. That’s what’s really going to propel us into the future.”

Defy is out on January 19 via Rise

Of Mice & Men: "We didn't know if we'd play another show together"