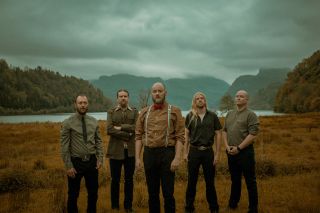 How to respond to a word that’s losing what’s left of its bearings? With grace is a start. Bergen’s Vulture Industries have long journeyed from that starting point, over the course of four genre-defying albums building a richly furnished, allegorical realm whose tales of avarice, decadence, industrial overlords and more weave sad, panoramic magic from an all-too-familiar plight.

If 2017s Stranger Times album gave the band’s sprawling, absurdist vision a more refined air, the effect was to concentrate their emotional weight, and it’s stamped throughout their new single, Deeper – released tomorrow via Dark Essence Records in green vinyl seven-inch and digital formats with a live version of The Benevolent Plan on the b-side. Part trail song, part restless, enflamed Nick Cave-style railing at gods just beyond reach, and all riven with frontman Bjønar Nielsen’s distinctively dramatic baritone, Deeper, according to the band, “tells the story of man's insatiable greed for more, as symbolised by the miners digging all the way to Hell. Starting out with a haunting trumpet solo, the track mixes a Spaghetti Western vibe with the rhythmic and melodic drive of a large-scale rock opus. Musically it nods in the direction of such diverse acts as Ennio Morricone, Type O Negative, The Beatles and Lee Hazlewood, but at the same time there is also a solid dose of rock and metal, in the signature form of Vulture Industries.”

For impatient and expectant souls, and those who want to be transported from their Easter Monday for six glorious minutes, we have an exclusive preview, complete with animations from regular contributor and artist extraordinaire, Costin Chioreanu.

Bjørnar has this this to say about the formation of the track: “It was one of those scorching summer days of 2018. The grass in the fields had all turned the colour of old paper, and the sun, at its zenith, was mercilessly searing our skin. Thirsty, hungry, and with tongues swelling, we had just missed the ferry crossing and could taste our hopes turn to ashes in our mouths. Trying to remain calm, but steadily feeling the building pressure of desperation, as a boiler ready to blow, we waited in line. Then suddenly the one year old in the back seat broke the silence chanting AHUM, AHUM, AHUM, AHUM! Overcome by what felt like divine inspiration but might very well have been sent from the depths of Hell, I started drumming on the dashboard. DUM, DADADUM, DADADUM, DADADUMDADUMDADUM.”

Without further ado, pull your coat collar tighter around your neck, stand at the threshold of the abyss and step across into the world of Deeper below!

Vulture Industries play at the Underworld, Camden on May 1 with Helheim and Madder Mortem. Buy tickets here!