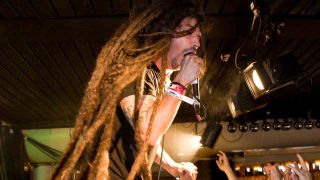 At the turn of the millennium, as nu metal became a parody of itself, metalheads looking for a new sound found hope in a group of fresh-faced bands emerging Stateside. Centred mainly around New England and Orange County, California, the likes of Killswitch Engage, Shadows Fall, Unearth and Bleeding Through were christened the New Wave Of American Heavy Metal after the groundbreaking British movement that had given rise to the likes of Iron Maiden and Judas Priest 20 years earlier.

Updating the metalcore fusion that had emerged in the late 90s with a mixture of 80s thrash, classic NWOBHM twin leads and heavy doses of Swedish melodic death metal, the NWOAHM banner covered everything from Hatebreed's breakdowns and Lamb Of God's savage riffs, to Atreyu and Avenged Sevenfold's eye-liner and the bulkier end of the equally burgeoning post-hardcore scene. Like all rock movements before and since, the 00s metalcore boom quickly became congested and faded away, though its influence and indeed many of its big hitters are still out there swinging.

Who they were: The band who launched a thousand inferior imitations, the Massachusetts pioneers emerged from local acts Overcast and Aftershock to establish a fresh Gothenburg-influenced sound with some of the biggest choruses metal has ever produced. The albums Alive Or Just Breathing and The End Of Heartache changed the game.

Where are they now: Still one of the biggest and most dependable names in metal. The return of frontman Jesse Leach in 2012 saw a colossal boost with 2013's Disarm The Descent, while last year's Atonement was another solid effort. And guitarist and metalcore producer extraordinaire Adam Dutkiewicz is still dicking around on every stage he sets foot on.

Who they were: Another band with its roots in Overcast and Aftershock, the quintet's mix of metalcore sensibilities with classic metal motifs saw them storm the Billboard Top 20 with 2004's The War Within and land a major label contract.

Where are they now: Despite their consistently excellent output, Shadows Fall's fall from grace was among the genre's most drastic. Shortly after Johnathan Donais took up the six-string reigns in Anthrax the band went on hiatus in 2015, with frontman Brian Fair (whose dreadlocks are still massive) announcing on a final European run, “We're going home so our kids will know who we are.” According to Fair, they were planning some reunion shows before the COVID-19 pandemic got in the way.

Who they were: Originally called Burn The Priest, the Virginians always stood out from the rest of the pack with their serrated thrash assault and Randy Blythe's larynx-shredding vocals. Basically the Slayer of the NWOAHM.

Where are they now: One of metal’s biggest and most dependable bands. Having got through Randy's 2013 manslaughter trial in the Czech Republic and the departure of drummer Chris Adler, they will release their new album, Lamb Of God, on June 19.

Who they were: Adding an electronic edge to their muscular metal, Cleveland’s Chimaira had a reputation as one of the best live acts around. Claimed to have invented the NWOAHM tag with a t-shirt. Frontman Mark Hunter even appeared on the cover of a NWOAHM Hammer special.

Where are they now: Numerous line-up changes hampered the band, with Georgian metallers Dååth making up half the roster by the time of final album Crown Of Phantoms in 2013. Chimaira enjoyed a one-off Christmas reunion show in 2017, while Hunter, now a photographer, has recently recovered from thyroid cancer.

Who they were: Masters of the widdly breakdown, the Boston purveyors of shred and riotous shows released some of the genre's undisputed classics with The Stings Of Conscience, The Oncoming Storm and The March.

Where are they now: Though also suffering metalcore's fall from grace Unearth have never gone away, doggedly touring and recording new material. Latest effort Extinction(s) is a venomous juggernaut that owes as much to modern hardcore bite as the likes of Pantera and In Flames.

Who they were: Doing their best to reclaim the “black metal” label (four of the band were African-American), the New Jersey quintet centred around sibling guitarists Doc and Dallas Coyle. However, the thunderous Gone Forever and ambitious IV: Constitution Of Treason albums never got the acclaim they deserved.

Where are they now: The band's impact began to diminish as they moved into more aspirant territory on later albums, before calling it a day in 2013. Doc Coyle has had a second bite of the cherry with arena metallers Bad Wolves.

Who they were: Hardcore behemoths who were lumped in with their NWOAHM peers. Frontman Jamey Jasta hosted the resurrected Headbanger's Ball from 2003, giving many of the era's bands a handy boost onto metallers' TV screens.

Where are they now: Seemingly having never stopped touring while releasing some of hardcore's most landmark albums, Hatebreed are one of the most ubiquitous names in the heavy realm. Silencing online moaners by owning Bloodstock 2012 remains proof of their place among the metal elite.

Who they were: Anthemic metalcore bro’s from San Diego who continually invaded the US Top 20 album chart during their initial run. The band's Christian beliefs contributed to their size Stateside, while frontman Tim Lambesis' Arnold Schwarzenegger obsession resulted in three albums under the Austrian Death Machine moniker.

Where are they now: As I Lay Dying looked to be terminated in 2014 after Lambesis was imprisoned for soliciting to murder his wife, with the rest of the band forming the unremarkable Wovenwar. However, the band controversially reunited after Lambesis' early release from prison, coming back with 2019's Shaped By Fire album.

Who they were: Spearheading the Orange County scene's goth-tinged take on the metalcore, Bleeding Through added a touch of drama with black metal riffs and haunting keyboards to their bullish aggression. This Is Love, This Is Murderous and Declaration are still yet to be bettered by the many who followed their lead.

Where are they now: Another band who saw their following drop off in the early 2010s, Bleeding Through called it a day in 2014, with frontman Brandan Schieppati visibly devastated on the band's final UK run. However, a one-off reunion in 2016 was followed by the band fully reforming in 2018 with new album Love Will Kill All. Schieppati's job as a gym owner means he still looks terrifyingly hard.

Who they were: One of the few musical acts from Alaska to make an impression, 36 Crazyfists mixed metal, rock and post-hardcore with Brock Lindow's idiosyncratic vocals to great effect on albums such as A Snow Capped Romance.

Where are they now: 36 Crazyfists' unique style was also seemed to be their flaw, never seeming to fit in anywhere and failing to attain the same traction as their contemporaries despite consistently great albums and the support of Roadrunner Records. But they're still going, having released latest album Lanterns in 2017 and ceaselessly playing to a diehard fanbase.