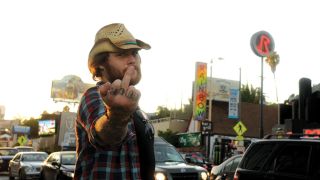 Could this be the start of a whole new movement?

HOW LONG HAVE YOU WANTED TO PURSUE ROCK’N’ROLL MUSIC AS A ‘DAY JOB’, DANNY?

“I think, probably, from around the age of three, which is when I first started hearing albums, appreciating music even before I was playing music. It’s just always something I’ve wanted to do. It’s always been inside me, I grew up on The Rolling Stones and Aerosmith. I just haven’t had the opportunity to get it out, mainly through not having anyone to do it with. Even though the opportunity wasn’t presented to me, it got to the point where I was like, ‘Screw it, I’ll make my own opportunity, then.’”

WHAT DO YOU THINK YOUNGER FANS WILL THINK OF A YOUNG GUY LIKE YOURSELF LEAVING A VERY POPULAR, VIBRANT SCENE TO PURSUE A MORE TRADITIONAL SOUND?

“[Metalcore’s] a very small part of music, as popular as it is. It’s popular to a small amount of people. This is blowing into a bigger world. I didn’t know what this was going to be like; starting a rock’n’roll band is a whole different machine, a whole different animal, and it’s a big world! Hopefully it’ll help a lot of singular-minded young people open their palates to new tastes and new styles.”

ARE YOU LOOKING TO SPEARHEAD A ROCK’N’ROLL REVIVAL WITH WE ARE HARLOT AND OPEN A WHOLE NEW GENERATION TO THIS SORT OF MUSIC, THEN?

“We haven’t had an Aerosmith, or a Van Halen, or a Kiss, in a lot of years. I don’t think it’s a conscious thing with us going out of our way, we’re just going to make music we want to make. Those bands are still touring and rock’n’roll is alive and well: we’re just bringing the focus back.”

HAS THE DOOR CLOSED ON YOUR INVOLVEMENT WITH ASKING ALEXANDRIA FOR GOOD NOW?

“It’s not even something I’ve given thought to. That was a great chapter of my life, and we did a lot of great things, but it reached a point when it was time for me to move on. There weren’t harsh feelings, there’s nothing negative, I wanted what’s best for them. I’ve explained as much as I’m going to explain at any time. At the end of the day, it’s nobody’s business, it’s our personal lives.”

THERE’S BEEN TALK OF WE ARE HARLOT FOR A WHILE: IS IT GOOD TO BE ABLE TO MOVE FORWARD AND PUT YOUR ALL INTO THIS?

“It feels great! I’ve had a lot of plans for a while but there’s been a lot of red tape, a lot of lawyers. It’s certainly good to finally have this album coming out.”/o:p

PUT A ROCK IN IT

Hailed by many as the natural and long overdue successors to Led Zeppelin, the Long Beach natives have been rocking and rolling their way around the United States and beyond for a little over five years now, and have rocketed into the public eye with some vigour in that time.

If We Are Harlot are a Guns N’ Roses for metal’s younger ranks, then the plucky Swedes are surely this generation’s Def Leppard. Shamelessly cheesy and packing enough anthems to fill a World Cup tournament, H.E.A.T. are perfecting the art of keeping their tongue miles away from any cheeks.

Arguably the most popular rock’n’roll band on the UK circuit right now, Jettblack’s sleazed-up swagger has made them a reliable hit at any show they choose to rock (LOL) up to. If there’s one lot from the British pack that could go the distance, it’s these lads./o:p