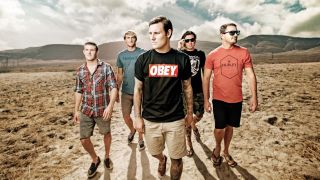 And their peers are stepping through in droves.

WHY DO YOU THINK THE AUSTRALIAN METAL SCENE IS GETTING SO MUCH ATTENTION RIGHT NOW?

Winston McCall, vocals: “There’s always been trends, but I think when it comes to heavy music from Australia, other than AC/DC and a few other bands here and there, this is the first time it’s happened in the modern era, simply because it’s something new. At the same time, I think there is a unique sound to most of the bands; there’s definitely an Australian flavour to everything. Nobody expected it, so it’s definitely gratifying to see people take notice.”/o:p

HOW DO YOU FEEL ABOUT BEING THE GUYS THAT KICKED THE DOOR OPEN FOR A LOT OF THOSE BANDS?

“It’s awesome, but at the time it didn’t feel like we were kicking open any doors. It felt like we were crawling through the doggy door and asking if we could have a go. It’s really nice to see these bands being noticed and knowing that we had some kind of a hand in helping these guys out. I have yet to be let down by seeing an Australian band playing overseas.”/o:p

HOW CONFIDENT ARE YOU IN THIS CURRENT GENERATION OF METAL BANDS, AND IN THEIR POTENTIAL TO GO OUT THERE AND DO SOMETHING SPECIAL?

“It’s really interesting to think about because it’s the changing of an era; nobody’s stepped into those shoes, and I think everyone’s sitting there saying, ‘Is that ever going to happen again? Is there ever going to be another Metallica?’ It wouldn’t surprise me if someone did, it also wouldn’t surprise me if we’ve seen the last of the dinosaurs and the sense of that absolute, massive status. I’ve got all confidence in the bands at the moment, but I think it takes more than musical ability to do something like that. It takes a real spark; it’s like one of those big bang moments – a comet from outer space comes down and creates some mammoth.”

WHAT ABOUT GENRES? ARE THE ATTITUDES OF YOUNG MUSIC FANS MAKING THEM OBSOLETE?

“I think they are and they aren’t. There’s so many tags, genres, sub-genres, pseudo-genres, it’s becoming meaningless. You’ve got genres for one specific band now. There’ll be one obscure band that’s, like, post-djent-true- rock-core-techno-whatever, where it takes longer to actually say the name than listen to the music. At the same time, the internet generation love labelling things, being able to share their knowledge by putting it down in words for everyone to see. The concept of these genres are getting melded so much that it’s dying, but people are people and they love trying to describe things.”

FINALLY, HOW ARE PARKWAY GOING TO STAY ON TOP OF AN EVER-CHANGING PACK?

“We just do what we do. We write the music that we love, we keep it heavy, and it’ll – mostly – sound like the Parkway you know!”/o:p

VICTORIA: Feed Her To The Sharks (Melbourne)