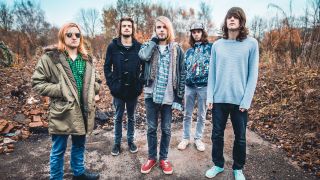 On September 10, 1991, rock was changed forever when Kurt Cobain, Krist Novoselic and Dave Grohl laid waste to the hair rock behemoths of the Sunset Strip with the release of Nirvana’s single, ‘Smells Like Teen Spirit’.

And now, over two decades on, its effects can still be felt with the emergence of a whole host of grunge revivalists. One of the most promising are the Leeds-based Allusondrugs, who clearly owe a great deal to the Seattle trio.

“We all grew up listening to them,” says frontman Jason Moules, who bears an uncanny resemblance to the Nirvana frontman. “I remember seeing them on VH1 for the first time when I was 17. They used to play rock music after midnight and I caught the name at the end. I’m dyslexic, so I thought they were called Santana. I knew my uncle likes Santana, so I told him I saw a video and described it. He said, ‘No, that’s Nirvana’. So his son, my cousin, gave me the Nevermind album.”

Allusondrugs – whose line-up is completed by Drey Pavlovic and Damo Hughes on guitar, Jemal Malki on bass and Connor Fisher-Atack on drums – share their grunge forefathers’ gritty lo-fi sound and have the knack off decorating their swirling rock with an abundance of infectious pop hooks. Jason credits their sound to his bandmates’ varied music tastes, as he for one, counts Icelandic genius Björk and much-derided Mancunian soul men Simply Red among his current favourites. New bands, however, generally get scant attention from the singer as he favours acts who’ve honed their craft the traditional way, using older recording techniques and zero studio trickery.

“I don’t really listen to new stuff,” Jason explains. “People used to be a lot more talented than they are these days. Just look at the way bands record now; it’s like they’re playing Grand Theft Auto with the cheats on. What you’re actually listening to isn’t what they’re playing. I’d rather listen to someone from the 60s; the vocals were all done in one go with no autotune or any crappy compression… it was just natural dynamics. You don’t get bands doing that these days, so why look through the shit?”

In recent months, the Leeds quintet have built up considerable momentum with tours supporting Marmozets, Lonely The Brave and Enter Shikari. And Jason, with tongue firmly in cheek, remarks that the quintet have a “five-year plan to sell millions of records” and they’re “already months ahead of schedule”. Whether they’ll sell albums by the lorryload and follow in the footsteps of their plaid-clad spirit animals is yet to be seen. While the happy-go-lucky persona of Jason is a far cry from the troubled figure we remember in Cobain, he shares a similar ethos to the Nirvana frontman. He’s unafraid to say what he wants and sees no problem in calling out those who he suspects are making music for the wrong reasons.

“We’ve played with bands from the UK who are ace, but when we played Reading and Leeds we saw bands who looked like they’ve just been dragged through Topman,” says Jason. “You can tell what style they’re going for from the uniform they’ve got on. It’s so stupid! [They’re doing it] for the money and need a good pension plan by the time they’re 35 but they’ll never be happy.

“It’s funny, some people seem to really love us, but the people who hate us seem to be musicians,” he adds. “Stop wasting your time saying you don’t like us on Twitter and write a decent song. Then, maybe you’ll be able to play the Manchester Academy one day…”

Allusondrugs are on tour throughout March and April. Check out their website for more details.