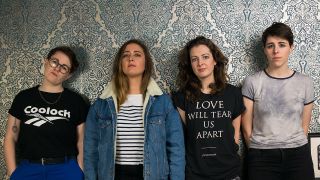 Ever wished Weezer had always been a bit less creepy and that they'd never happened across Beverly Hills? Then you might want to pay attention to the hook-heavy sounds emanating from Irish pop-punks Pillow Queens, sharing as they do the same predilection for glorious songwriting, sunny harmonies, infectious sing-a-long choruses and having dogs star in their videos.

In the wake of their recent UK and Ireland your, we catch up with the band to find out more about them, their journey, and what they've got lined up for next.

"We are Cathy, Pam, Rach & Sarah. We are from different parts of Ireland that we're all very proud of. Cathy shreds, Rach plays drums, Sarah & I (Pam) play bass and guitar, and we all sing."

"It was pretty organic. We'd all been looking to get involved with new projects and happened to come together over basketball and pints and eventually started jamming and it felt right."

"We all have such different influences, so it's hard to pin down any shared ones. We're all fans of 90s alternative rock like Pixies. That’s like the one band we all know we like."

"A lot of people find us 'special' because we’re all not men, but that’s a little bit of a low bar to be honest. There are plenty of bands just like us and even better out there and to distinguish ourselves from the rest is the job of the listener. But Cathy does have a tail, so there’s that."

What’s the story behind the new EP State Of The State – how did you approach writing and how did it come together?

"State Of The State is still the music generated from us first getting together. We’ve only been Pillow Queens for little over a year and in that time we packed a lot in while getting to know each other in a musical way."

What’s your favourite story/anecdote from recording the EP?

"I tried to hit a note only audible to dogs in one of the songs. I partially succeeded but it wasn’t pretty. There’s a video that will never surface for my own sake. It’s very deep in the mix."

What, in your opinion, is the stand out track on the EP?

"The first track on the EP, Puppets, feels like it’s the embodiment of what we have to come. It’s the newest song on the EP and one we rehearsed and added to while on tour in the UK last summer, so it has lot of good band memories attached."

What do you hope people will take away from the EP and your music in general?

"To consider joining a band, because it’s great craic! But mostly to just enjoy themselves while we pour our hearts out."

"Our highlight so far is probably playing Other Voices down in Dingle. It sort of felt like we really had no right being there but it was a huge pay out for all the work we put in throughout 2017."

"They can expect to see four gals trying their best and having a laugh while doing so. We don’t play perfectly, and our jokes are occasionally duds but we make up for all that in enthusiasm."

"Well, in April we’ll be on our Ireland and UK tour ending with our headline show in Dublin’s Workman’s Club with support from the amazing Girlfriend. After that we’re going to be looking forward to having a rest but it will probably be short lived, knowing us."

State Of The State is available now via Specialist Subject Records.