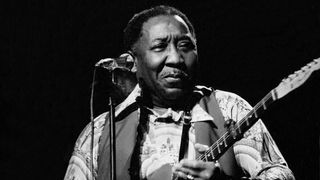 His songs have been covered by everybody from Jimi Hendrix to Jimmy Smith; The Rolling Stones even named themselves after one of them. Muddy Waters – born in Mississppi sometime around 1915 – was the heart and soul of 50s Chicago South Side blues, revered by peers and disciples alike, and rivalled only by Howlin’ Wolf. His rich, chesty baritone and spikily adroit slide guitar combined with charismatic charm and effortlessly magisterial authority to render him equally formidable as singer, guitarist, performer, bandleader and songwriter. In 1948, his first big hit Can’t Be Satisfied established both Chess Records and Muddy’s position at the centre of a fiercely electric new city blues scene; great players like Little Walter, Buddy Guy, Junior Wells and Otis Spann worked on his records, Willie Dixon wrote him some memorable songs, and when the hits finally stopped coming, a young white audience inspired by The Rolling Stones, Paul Butterfield, John Mayall and Eric Clapton elevated him to the status of a treasured elder statesman. When Chess Records disintegrated in the mid-70s, Johnny Winter signed him, produced him and got him rediscovered all over again: the version of Mannish Boy which opened his comeback album Hard Again became a new signature song.

His presence, on record or in person, was huge and monumental; his repertoire stuffed to the brim with classics: Hoochie Coochie Man, Got My Mojo Workin’, I Just Wanna Make Love To You and Mannish Boy are just for starters. He died at home just outside Chicago in 1983: the human link between the prewar Delta blues of Robert Johnson and Son House and the blues-based rock of The Rolling Stones, Jimi, Clapton, Led Zep and all who followed in their footsteps. His shadow looms large over the music of the second half of the 20th century, and beyond.

The concept of album culture came late to the blues: most of Muddy Waters’ best work prior to the late 1960s was, like that of his peers, originally released on singles and only sporadically collected onto full-length long-players. This minimally-packaged (and non-chronologically-programmed) 75-song, three-CD set is, by a moderately short head, the best bang-for-the-buck assemblage currently available of the Big Mud’s big stuff, as cut during his fruitful first couple of decades with the incomparable Chess Records label. Call their names with pride: Hoochie Coochie Man, Got My Mojo Workin’, I Just Wanna Make Love To You, Rollin’ Stone, Long Distance Call, Still A Fool (also known as Two Trains Running), Can’t Be Satisfied, I’m Ready… this is the music which not only defined Chicago Blues in perpetuity but it also went on to galvanise the Stones, Clapton and the rest of the mid-60s Brit-blues posse, thereby forever altering the course of rock and cultural history.

It is, then, some of the most important and influential music you will ever listen to. The various studio bands backing the singer include stellar players such as pianist Otis Spann, harp maestro Little Walter, Junior Wells and James Cotton, bassist Willie Dixon and guitarists Jimmy Rogers and Buddy Guy, but the audio spotlight, quite rightly, never leaves Muddy Waters, and the repertoire (mostly composed or adapted by Dixon and Waters himself) is still being performed on a nightly basis in bars and clubs all around the globe… but never the way you’ll hear ’em here in their perfect, original incarnation. Wherever you find these tracks, rest assure that you need to get ’em in your life as quickly as humanly possible.

Superior: The albums that built his reputation

The Newport Jazz Festival gets hit by a Mud-slide.

Exploding from the dark and smoky South Side bars onto the big bright stage for the big white audience, Muddy Waters and his band rock the sedate jazzers at the 1960 Newport Jazz Festival into tiny little pieces, even, brilliantly, playing Got My Mojo Workin’ twice because once just wasn’t enough. Otis Spann on piano, and James Cotton on harp shine; Muddy doesn’t touch his guitar throughout the set, but he works the crowd like a true champ, singing up a storm on the evergreen likes of Hoochie Coochie Man, Baby Please Don’t Go and Big Bill Broonzy’s stone cold classic I Feel So Good. It captures Muddy Waters at his live best.

The autumnal 1977 comeback: new label, new producer (Johnny Winter), tried-and-trusted sidemen (a mix of then-current bandmembers and returning alumni, including James Cotton, pianist Pinetop Perkins, drummer Willie ‘Big Eyes’ Smith and Winter himself on guitar, including some brilliant ghosting of the guitar bits that you’d think were Muddy himself), and a setlist heavily tilted towards venerable classics such as the much-quoted Mannish Boy restored the might and majesty of Muddy’s vintage music: he hadn’t sounded so powerful and committed for years. The title, incidentally, refers to the way the artist said the music made him feel.

The recordings that went on to create a star.

When famed folklorist Alan Lomax came through the Delta in 1941 looking for Robert Johnson, not knowing the great bluesman was already dead, he found Muddy Waters instead: a young Muddy, pre-Chicago, pre-Chess, pre-Willie Dixon and pre-electric guitar. These acoustic field recordings foreshadow much of what Muddy went on to do in the Windy City, and his first hearing of the playbacks (including an early version of Can’t Be Satisfied, his first Chess hit) convinced Muddy that he might have more of a future as a performer than as a farmhand. He was right, too.

Good: Worth a butchers

A double whammy of classic covers and acoustic nostalgia.

A double-back of two lovely retrospective albums: Big Bill (from 1959) sees Muddy paying tribute to the original godfather of Chicago blues, fellow Mississippian singer/guitarist Big Bill Broonzy, in a programme of his songs translated into late 50s bar-band style: I Feel So Good became part of Muddy’s regular live set. 1964’s Folk Singer is a deliberately retro acoustic album, harking back to the music of Muddy’s youth and aimed squarely at the plentiful fans of the then-current folk boom.

Proving that age is no barrier to rocking out hard.

Cut post-Hard Again, this finds Muddy and various versions of his road band (including one guest-starring Johnny Winter himself and James Cotton on harp) out on that mean old highway blasting stuff like Mannish Boy and She’s Nineteen Years Old. Well into his 60s, Muddy brings it big time to noisily appreciative white club audiences, who egg him on to sing his bits off, dish up the most fierily spectacular slide guitar solos of his entire career and generally prove himself more than capable of blowing the young folks’ socks off.

THE MUDDY WATERS BLUES BAND: Mud In Your Ear (Wienerworld)

Not a bad album as such (how could it be with Otis Spann playing piano?) but despite the artist credit, cover art and title, it’s less a genuine Muddy Waters record than an album by the 1967 edition of Muddy’s back-up band, with the man himself producing and playing some guitar, but not singing. For completists and buffs only.