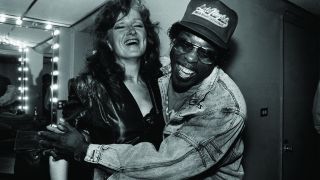 He was the Strat-toting cat who thrilled 60s audiences with an explosive lead guitar style and a voice that switched from deep croon to swooping highs. Yeah, we could be talking about Jimi Hendrix here. But while Hendrix was labouring on the chitlin’ circuit with a flipped-over Fender Jazzmaster, Buddy Guy was dressed to kill backing up Big Mama Thornton with his sunburst Strat and hanging with the Chicago blues elite.

Like many other blues stars of the 60s – Muddy, BB, Wolf, Albert King – Buddy Guy made it his business to move with the times as his audience switched to young white rock fans. He was younger than many of his peers, and easily incorporated new trends into his music. He also altered his look to reflect the times and, like his friend BB King, understood how important his image was to his disciples.

When Guy hit the stage for the Stones’ Martin Scorsese directed 2008 concert flick Shine A Light, he looked like a bantam rooster surrounded by a bunch of scarecrows. Dressed to the teeth in a suit and bowler hat, with a polkadot Strat hanging from his shoulders, he showed that he’d lost none of his sartorial elegance. As this photo gallery proves, looking cool is a big part of the man’s legacy.

Eric Clapton
Here Guy jams with Eric Clapton on March 26, 1969 for the documentary Supershow. A meeting of such magnitude should have taken place somewhere epic like The Royal Albert Hall. As it was, the artists who appeared in it – Led Zeppelin included – assembled in a disused lino factory in Staines, Surrey.

Stevie Ray Vaughan
They had different approaches to blues but they were the hottest gunslingers in their territories. SRV paid his respects with a cover of Guy’s Mary Had A Little Lamb on his ’83 debut Texas Flood. Guy returned the compliment with his tribute Remembering Stevie in 1991, a year after his friend’s passing.

**Robert Cray
**Robert Cray was one of the new kids on the block when he took to the stage with Buddy Guy. The elder statesman’s support of new blood – ask him about blueser Quinn Sullivan – is written all over his face in this pic from 1987. In classic Guy style, he steps back to give the spotlight to the younger musician.

Bonnie Raitt
The superb vocal and guitar talents of Bonnie Raitt brought her into the midst of many blues icons, not least John Lee Hooker. Pictured with Guy in 1989, Raitt worked with the Chicago bluesman on his 1993 album Feels Like Rain, helping him create magic on the John Hiatt-penned title track.

Muddy Waters’ Wake
James Cotton and Buddy Guy raise a toast during Muddy Waters’ wake at The Lounge, Chicago, Illinois, May 3, 1983. In the previous years Waters regained his form and fame with a trio of incredible albums: Hard Again (1977), I’m Ready (1978) and King Bee (1981). He passed the torch to Guy.

The Polka Dot Years
Honouring his late mother, Guy took to dressing his guitar, and himself, in polka dots in the 1990s. The effect, showcased in this shot from 1998, created an iconic look akin to BB King’s black and gold Lucille, Rory Gallagher’s battered Stratocaster and Jimmy Page’s ’59 Les Paul Standard.

The Rolling Stones
On stage with Keith Richards of the Stones in the 2008 Martin Scorsese rockumentary Shine A Light, Guy brought the weight of Chicago blues to the event, out-singing and playing everyone else in the room on a blast through Muddy Waters’ classic Champagne & Reefer.

President Obama
In 2012, US President Barack Obama honoured Guy in a ceremony at The Kennedy Centre in Washington. Also being honoured that night were Jimmy Page, Robert Plant and John Paul Jones of Led Zeppelin. Accepting his award, Guy paid tribute to his mentors Muddy Waters and Howlin’ Wolf.

BB King
Guy’s friendship with BB King goes back to the late 50s when he was a kid in Chicago. The encouragement BB and Muddy gave to the young Buddy Guy is staggering. He wasn’t a rival, he was one of the boys, and BB King wouldn’t have entrusted the blues to anyone else after he was gone.

Junior Wells
Buddy Guy’s partnership with harp legend Amos Wells Blakemore Jr, better known as Junior Wells, was a match made in Chicago blues heaven. Pictured here in 1992, six years before Wells’ death, the duo worked together on some of the greatest blues recordings ever cut. The pinnacle was Wells’ ’65 masterpiece Hoodoo Man Blues. Due to contractual issues, Guy couldn’t be credited on the record. Instead he was listed as “Friendly Chap”.

Can’t Quit The Blues | Silvertone/Legacy Box Set
If you’re rich, in a hurry, just plain lazy or any combination thereof, this starter-pack set (3 CDs/1 DVD) should get you up and running, with Buddy’s first 30 years (Chess, Vanguard et al) squeezed onto one CD, and the 1991-and-after Silvertone era occupying two. Some who already own all or most of the music have bought this just for the career-spanning live DVD. *The Very Best Of *Buddy Guy (Rhino) is a rather less spendy and more manageable round-up of BG’s pre-Silvertone stuff.

Buddy’s Blues | Chess
Guy’s first Chess album wasn’t released until after he’d left the label for Vanguard. 1974’s I Was Walking Through The Woods scooped up a fair selection of his core-repertoire singles, including First Time I Met The Blues, Stone Crazy, Ten Years Ago and My Time After Awhile, and this is the expanded grown-up version of that. Serious geeks may prefer The Complete Chess Studio Recordings, which gives you both everything you need, and everything you don’t: lotsa killer plus plenty of filler.

A Man And The Blues | Vanguard Hold That Plane! | Vanguard
Guy’s first real studio albums: the first features a fabulous band including Chess veterans Otis Spann (piano) and Fred Below (drums). The guitar sound is cleaner than Guy would’ve liked, but it’s still revelatory, and the follow-up, Hold That Plane! is almost as good, if only for the killer title track. (Some of Guy’s best playing from this era is on albums by his musical partner Junior Wells, including the live album It’s My Life, Baby! and two Delmark studio sessions, Hoodoo Man Blues and Southside Blues Jam.)

Stone Crazy! | Alligator
Dating from 1979, originally entitled The Blues Giant and cut in France in a single studio day with Guy’s road band of the time – including his younger brother Phil on rhythm guitar – this is an absolute monster; a wilder studio Guy than ever heard before. A major ear-opener for Hendrix, Jeff Beck and SRV fans: not just the best Buddy Guy album of its era, but one of his all-time studio performance peaks.

Buddy’s Baddest | Silvertone
A sensible filleting of Guy’s first Silvertone decade, concentrating heavily on his earliest albums for the label (though omitting Feels Like Rain’s killer version of Marvin Gaye’s Trouble Man, for which a resounding “boo”) and padded with a generous helping of previously unreleased stuff, including a glorious take on Little Willie John’s Need Your Love So Bad, as later covered by both BB King and Peter Green-era Fleetwood Mac. (A pedant writes: if these tracks were truly among Buddy’s baddest, how come they weren’t put out at the time?) Between them, this and the Rhino Very Best Of provide a more than fair summary of Guy’s work in the 20th century.

Damn Right I Got The Blues | Silvertone Feels Like Rain | Silvertone
A lifetime’s worth of pent-up creativity explodes across these two discs: producer John Porter hedges his bets by tilting the production and arrangements towards a Gary Moore-ish big rock take on the blues, but he also gives Guy all the freedom he needs. And boy does he use it.

Heavy Love | Silvertone
The deeply cool killer 70s-style Shaft-era funk-soul blues album no one was actually smart enough to commission Guy to make in the 70s.

Sweet Tea | Silvertone
Recorded way down in the North Mississippi hill country – home of the Fat Possum label, the late Junior Kimbrough (several of whose songs BG covers) and the studio after which the album is named – this is a huge, over-amped, rough-as-abear’s- butt hardcore blues rock blow-out with a menacing rhythm section stomp and some of the screamiest, most hotwired guitar of BG’s entire career. This is the first appearance of his current party trick of impersonating a doddering old geezer and then blowing all present through the back wall. Dark, murky and densely riff-packed, this is a delight for those who like their blues heavy, and therefore an ear-opener for Zeppelin, Cream and ZZ Top fans.

Bring ’Em In | Silvertone
A panoramic view of the R&B DMZ between blues and soul, with its Isaac Hayes, Wilson Pickett, Curtis Mayfield, Otis Redding and Bill Withers covers, a Latinate I Put A Spell On You with Carlos Santana, a Dylan-country Lay Lady Lay and plenty of funk boogie served up with a double side of grits. Guest shots from Tracy Chapman, John Mayer and Keith Richards add extra flavour.

Skin Deep | Silvertone
…And its just-as-cool sequel, including guests Eric Clapton, Robert Randolph, Derek Trucks, Susan Tedeschi and Quinn Sullivan (the latter the implicit subject of Who’s Gonna Fill Those Shoes), who are all most welcome but not ultimately necessary. Can you smell the funk? (Guy’s question, not ours… though we’d endorse it.)

Living Proof | Silvertone
There’s some major stuff strutting on the opening 74 Years Young with its bragging lyric and explosive guitar solo; a tearjerker-and-a-half in the BB King duet Stay Around A Little Longer and Buddy himself on blazing form throughout. This man not only doesn’t sound ready to retire – he doesn’t even sound tired.

Rhythm & Blues | RCA
Guy still showed no signs of fatigue when he released this two-disc album of collaborations in 2013. Aged 77, he swash-buckled his polka-dot Strat on hook-ups with the likes of Aerosmith, Kid Rock, Gary Clark Jr and Beth Hart. As Terry Staunton remarked in his review for this magazine at the time: “In theory, the guests may attract listeners with a previously only passing acquaintance to Buddy’s output, but in practice it’s still Guy’s show; a constantly surprising and exciting illustration of what made him a legend in the first place.”