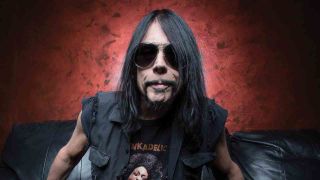 Dave Wyndorf is the leather trouser-clad Lord High Priest Of Stoner Rock. In a scene where drug-hazed rumble trumps personality, the larger-than-life Monster Magnet frontman stands out. Channelling the spirits of Black Sabbath, Hawkwind and PT Barnum. the New Jersey-ite has steered his band through three decades of rock’n’roll craziness, from the commercial highs of 1998’s multi-platinum Powertrip album to the personal lows of a near-fatal prescription drug overdose in 2006. Here, he looks back on the journey that took him from high school nerditude to psychedelic rock gpdhood…

Any brothers or sisters?

“There were eight kids in the family. I was a middle child, with five sisters and two brothers. One brother was eight years older than me, so there was no competition there, and my other brother is six years younger than me, so there were no problems. I just beat the shit out of him! Ha ha ha!”

“It was a pretty idyllic existence. We were poor but we didn’t know it. We had a lot of woods to go to, there was a river nearby. Real Tom Sawyer shit. You go out in the summertime at seven in the morning and you don’t come back until lunchtime, then you go out again and don’t come back until dinnertime. I loved it. I have no complaints.”

Did you have a good relationship with your parents?

“It was always really happy. My parents were World War II veterans. They grew up during The Great Depression, so everything after that was just gravy. They were like, ‘The birds are singin’ in the trees! It’s a great day!’ They just didn’t complain. My mom was a fuckin’ Zen master, a really imaginative person. My dad worked his ass off all the time, but he never complained. My family was always completely sarcastic and funny as shit. And they still are.”

Were you a rebel at school?

“I was really shy at school. I was a ghost. I lived inside my own head. My brain was good at imagining things, so for the longest time I didn’t really have to go outside of that to keep myself happy. It wasn’t until later, when I discovered girls, that I realised it was time to clean up my act and climb out of my head. But I always did a lot of daydreaming.”

When did you first get blown away by music?

“Oh, really young. My mum loved classical music and she used to play stuff like Danse Macabre and all these classic pieces, and they’d always have stories behind them, like, ‘Here’s where the skeletons rise up from the grave!’ and I’d be like, ‘Woah! This is fuckin’ awesome!’ My brother had records too, like The Beatles and The Stones. There was music in every TV show and all the old movies I watched, all these old monster movies with bodacious soundtracks, which fuckin’ rocked in their own way. So music was everything.”

At what point did you decide that you wanted to be in a rock band?

“I went to concerts from the age of 14, maybe two or three a week, and I saw everything. I was a total rock maniac, in a very quiet way. One day in high school, these kids I’d met said, ‘You wanna come over and practise? We’ve got a band!’ I’d never been close to a real band before. I couldn’t play anything. I went over and I knew all the words to the songs they were doing, like Ramones songs and UFO and all that stuff. The guy who was singing didn’t know all the words, so I ended up singing. The next thing you know, I joined the band. We went from being a covers band to being a punk rock band called Shrapnel.”

So when did Monster Magnet begin?

“Eventually I bought my first guitar. As soon as I plugged that thing in and started playing around with a fuzzbox, that was it. That was the sound I wanted. Tim Cronin [bass] worked at Jack’s Music Shop, I worked at Fantasy Zone comic shop and John McBain [guitar] worked at a used record store. It was three nerdy retail guys, all lost in our own obsessions. Those two guys had been making tapes under the name Dog Of Mystery, doing weird, experimental, Butthole Surfers kind of stuff. I had my own little thing going, called Love Monster. They wanted to do a live Dog Of Mystery thing and they needed people to fill it out. I said I’d play guitar, we started to play some songs I’d written, and we eventually became Monster Magnet.”

“Oh yeah! Every three months we’d change the name. For a while it was Heroin Mule, then Nipple Tank, Acid Reich, Madness Is The Mongoose, Wrath Of The Bullgod, King Fuzz, and then finally we got a gig in southern Jersey with Jane’s Addiction. On the way we were talking about old toys, and someone mentioned a thing called a monster magnet, and that was it. ‘That’s the name of the band for tonight!’ We played a 25-minute version of Grand Funk Railroad’s Paranoid with every echo machine on fuckin’ 11!”

“It was total bollocks, but if you do that kind of stuff with a serious face, people think it’s art. And they did! People were clapping and cheering and I just thought, ‘Wow, is it this easy?’ Ha ha ha! This old dude came over and said, ‘It’s the return of drug rock! Alright!’ and he gave me the thumbs-up.”

Were you all guzzling drugs back then?

“No, not really. The other guys were smoking pot, but not me. I hadn’t done drugs in years at that point, but I was totally in love with psychedelia. I loved the idea of the peace and love movement being turned on its head and being really, really ugly. That’s what I saw when I was a kid. I grew up in the 70s when everybody had long hair and looked like hippies, but they weren’t. They were mean!”

Were you pleased when the stoner rock scene kicked off in the 90s?

“It felt great. The world finally understands! I was really a kindred spirit with the Butthole Surfers and even early White Zombie, Mudhoney, Spacemen 3 and all those guys. I was really psyched by that, but that stuff was on its way out, so it made me really happy to see that there were other bands doing the same thing. Kyuss were doing stuff that I would never do, which was playing the same riff forever. Your favourite Sabbath riffs, over and over! It’s a great soundtrack to being stoned and it was really fucking cool.”

With your second album, 1993’s Superjudge, you went from being underground heroes to a major label band. Was the transition easy?

“It was a challenge. The way I thought about joining a major label was like I was cutting off my left nut. It was the worst thing I could do, but at the same time I was old enough to realise that it was the only thing to do. You either jump in with your fists flying and take everything on or you don’t. So we did. No matter what we did, it seemed to catch on to a certain extent. Those were golden days.”

Was it the always the plan for Powertrip to break Monster Magnet?

“We achieved it naturally. There wasn’t any grand plan. The weird thing was, that album was laughing at the whole rock’n’roll circus, but a lot of our new fans thought it was real. I was wearing leather pants and people were loving it! But for me it was just another chapter in Monster Magnet World. I guess we could’ve made ‘Power Trip Two’, but that’s not how I do things.”

You had a nasty brush with prescription drug addiction and depression. What exactly happened?

“I started taking these super-powerful anti-anxiety drugs to put me out like an animal for six or seven hours a night. It was time to sleep, so bam! But they got me. If I was on tour, they would’ve worked for two or three years. Your body’s completely sweating all the time, so most of the residual drug effect is gone, but as soon as you slow down and you’re taking the same pills, they get hold of you. That stuff was the most dangerous drug I’ve ever taken in my life, that’s for sure.”

How did you shrug off the depression and the addiction?

“I can laugh about it now, but I don’t think I’ve ever seen things that black. Depression is fucking horrible. It’s an emotional cancer. It was worse than any acid trip. It was my own personal horror movie. If I thought I knew about insanity before, I just took a fuckin’ graduate course. But now it’s over and I’m feeling great! Ha ha!”

Do you see Monster Magnet as something you’ll do until you’ll drop?

“I’ll keep doing it until I drop dead on stage or find something better to do! I love making albums and playing live. It’s a great feeling, getting out there and fuckin’ slamming it out. Those are the things that make it all worthwhile because they remind me why I liked rock’n’roll in the first place. It never gets old for me.”