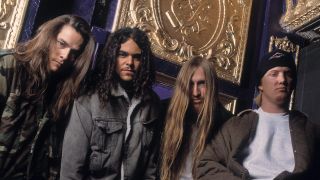 It’s 116˚F in California’s Palm Desert today – 46˚C in real money – a stifling, debilitating heat into which only the foolhardy venture. Not that there’s anywhere to venture to unless you like golf or antique shops. And it was here, in this most unlikely environment, that rock music – stoner rock, in particular – was changed forever, with the birth of a band called Kyuss, and their second album, Blues For The Red Sun.

The seeds were planted five years earlier, when 14-year-punk-rock-loving skateboarder and drummer Brant Bjork decided to form a band named Katzenjammer – German slang for hangover – with his best friend and budding bassist Chris Cockrell. Brant knew a kid from school, a Black Sabbath fan by the name of Nick Oliveri, who was selling a bass to take up guitar, so he and Chris went to his place to see what was up. The trio jammed for a few months, and at the end of the summer recruited another local kid, Josh Homme, as their second guitarist.

“It was a tiny scene,” says Brant today. “That’s why it’s funny when there’s all these guys going, ‘Each little village in the desert, Palm Desert, Palms Springs, Indio, had their own little scene’, but even when we came together it was a small scene. So when you’re putting a band together, there were basically no options; we were the only guys who could have joined a band.”

When another local kid, John Garcia, joined as vocalist, they changed their name to Sons Of Kyuss, named after a character in the roleplaying game Dungeons & Dragons, and released an eponymous EP in 1989. Thanks to YouTube, you can check out the EP, and it’s not at all bad for a bunch of young teenagers. The same can be said for their debut album, Wretch, from 1991, the band having shortened their name to Kyuss (Nick Oliveri, who had quit as guitarist before the EP, rejoined as bassist in time for the album, replacing Chris Cockrell).

More than 100 miles away from Los Angeles and the width of a continent from New York, Palm Desert had no outlets for young bands. Kyuss decided to take matters into their own hands. Setting up makeshift stages in the desert outside of town, they would play gigs to ever-growing crowds of friends. Part gig, part alfresco revelry, they became known as ‘generator parties’, due to the electrical generators used to power the band’s amps.

“Back in the day it was just punk rock, DIY, or our version of it,” says Brant. “DC, New York, and LA all had their scenes, and in the desert we had ours. There were no clubs to play at, especially back in the 80s. You’d go and hang out at McDonald’s because there was nothing to do, so we’d put bands together and just go and play out in the desert.”

These semi-legendary gigs have become part of the Kyuss myth over the years. But according to Brant, the reality was less glamorous than the idea.

“It was like Altamont every weekend,” he laughs, referring to the infamous 1969 Rolling Stones gig. “There was no security, no nothing. That’s what’s so ironic about people romanticising those parties. You had a lot of fun, but it was primal and dangerous.”

As word of these generator parties spread, so did Kyuss’s fame. But no one saw what was coming next. In 1992, while the rest of the world was either preoccupied with grunge or crying over the ashes of hair metal, Kyuss released Blues For The Red Sun. Heavy as lead but with a punk rock spirit, it sounded like nothing else around at the time.

Kyuss themselves knew they were sitting on something special with Blues For The Red Sun, even if they weren’t entirely comfortable with the ‘stoner rock’ tag that swiftly sparked up around them.

“We were definitely smoking pot,” affirms Brant, “and that was definitely a big part of our chemistry. In fact, I was smoking a joint when I came up with the whole concept for Blues For The Red Sun. Josh and I used to smoke a lot of weed together, and I think that’s what connected us, because we were very different as people; our ideologies, our background, our sense of humour, we couldn’t have been more different, and the weed really brought us together.”

Kyuss themselves had a bigger gripe with the fact they were perceived as a metal band when they considered themselves punk. Josh Homme frequently argued that despite their slow, heavy riffs, he was more into Black Flag than Black Sabbath.

“Josh was being honest when he said he wasn’t ever really a Black Sabbath fan,” agrees Brant. “He was always very comfortable with his punk rock roots. Heavy metal is a big genre; it has a tendency to pull everything in, and there’s not much you can do about it. It was kinda frustrating, because I don’t have anything against heavy metal, but I thought Kyuss was a punk band.”

Producer Chris Goss was a key part of the Kyuss jigsaw. Chris, who fronted Rick Rubin-produced blues rockers Masters Of Reality, didn’t just capture the oh-so-heavy sound of the band, he captured a vibe – a fuck-you attitude born of playing to people who hated them. But most of all, he captured the environment the band came from. Listen to it now, and you can almost feel the desert heat rising from the likes of Thong Song and Freedom Run.

“Yeah, but alongside the heat, even more than the heat,” says Brant, “what contributed most was playing outside. When you play outside, you hear things in an entirely different way; the guitars and drums behave in an entirely different way. If it ain’t dialled in right, it’s gonna sound real wanky and thin, so it was like, bigger drums, bigger guitar sound, because of the environment.”

Ironically, the parties that had contributed to Kyuss’s unique sound in the first place had become too big. What had started as a chance for a bunch of likeminded kids to let off steam had become a giant free-for-all.

“When it got bigger, a lot of people gave up, because more and more people showed up who weren’t necessarily into punk rock or music – they just wanted something to do,” says Brant. “When you bring all those people together from different parts of the desert, it turns into tribal warfare! You get a lot of guns and stabbings, and that’s what really ended it.”

Blues For The Red Sun was released in June 1992, but despite rave reviews from the metal press, it was far from an out-of-the-box success. Sales were poor. ‘You don’t seem to understand the deal’, sang John Garcia on the first line of the opening track, Thumb. It seemed strangely prophetic.

But the impact the album had to those who were listening was huge. It swiftly spawned a thousand imitators and an entire scene. Suddenly, it seemed like every other band was tuning their antenna to a low-end rumble and wreathing themselves in dope smoke.

Still, a buzz surrounded Kyuss, helping them bag tours with Metallica, Faith No More and Danzig. But like a badly rolled joint, they were destined to fall apart before they reached full potential. Nick Oliveri quit once again before Blues For The Red Sun was even released. Brant Bjork wasn’t far behind, departing after 1994’s no-less-brilliant Welcome To Sky Valley. Kyuss themselves fell apart in 1995, following their swansong album, …And The Circus Leaves Town.

“The writing thing is what made the band implode,” says Brant. “We had a publishing company and everyone got 25%, whether I came with more material or Josh did, which was pretty much the case. It came to a point where Josh wanted to break up the publishing individually, and by doing that you are breaking up the spirit of the band. That’s exactly what happened.”

All four members would go on to different things. Josh put together Queens Of The Stone Age, soon to be joined by Nick. John Garcia formed Slo Burn and, subsequently, Unida and Hermano. John, Brant and Nick have played together – most notably as Kyuss Lives!, until Josh forced them to change their name to Vista Chino.

With the guitarist still holding out, a full-blown Kyuss with all four guys looks unlikely. But their influence remains huge – echoes of Blues For The Red Sun can be heard in everyone from Orange Goblin to Mastodon.

“I love Welcome To Sky Valley, and …Circus is a good record,” says Brant, “but Blues For The Red Sun captures what that band really was in its most natural, most organic state. I didn’t know if anyone would like it, but I thought it was badass. I think you get these eras when there’s bands doing stuff that’s not really in line with where culture’s at, especially back then with the grunge thing blowing up. It took a good 10 years for people to catch up.”