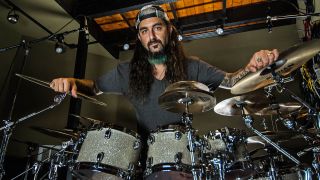 Were you a good student?

Hell no. I even got thrown out of the one class I was good at – music – for showboating. But at my high-school graduation, after years of being belittled by the music teacher, he awarded me the top scholarship the school had to offer.

You met future bandmates John Petrucci and John Myung at Berklee College Of Music. What were your first impressions of them as eighteen-year-olds?

John Petrucci reminded me of myself in many ways. He was a typical Long Island upper-middle-classic music nut. John Myung remains the same right to the present day – quiet and introverted, with his bass strapped on at all times.

What’s the worst day job you ever had?

In the summer of 1983 I worked three jobs to pay for my drum kit. The worst of those was being a shit-picker. I walked up and down Long Beach cleaning up, quite literally, shit.

When did you realise you had a problem with alcohol?

I knew many years before I quit. I would spend my entire day thinking about drinking. It became all-consuming, and I recognised that but I carried on anyway until seventeen years ago.

What were your thoughts on that day in 2010 when at a Dream Theater band meeting you proposed a hiatus that the others opposed?

Believe it or not, I wasn’t feeling sad. Nothing bad had led to my proposal, though the outcome was completely blown out of proportion by the internet. Those guys begged me to reconsider and stay. But there was no animosity between us.

What have the last seven years out of Dream Theater taught you?

From the aftermath of my exit I learned that any innocent little comment can be twisted to make it seem something that it isn’t. That was so disheartening. Even right now I’m tiptoeing around [laughs]. But in a broader sense I’ve no regrets. I’ve done everything that I could possibly have dreamed of doing – times ten.

What can Mike Portnoy do that nobody else can?

I can juggle eighty-seven bands at once.

Have you ever felt guilt over stretching yourself too thinly?

My God, I promise you that’s never been the case. If I couldn’t do it, then I wouldn’t. But I really can. I would feel short-changed being in only one band, but I guess not everyone’s a workaholic like I am. To me it’s like acting: why play one role for the rest of your life?

There’s a higher power of some sort that guides the universe. That was a big part of my sobriety – needing something beyond myself to help guide me.

A Mike Mangini-era Dream Theater song comes on the radio. Do you change the channel?

Out of curiosity I will listen for about thirty seconds, and then change the channel. That’s not a statement based on quality. Hearing that band without me still hurts. Whenever I read about something they’re doing, that’s painful to me. It’s like seeing an ex-wife with a new husband.

And would you ever go back to that same ex-wife?

I’ve no longing or intention to do that, but if the opportunity arose and I was available then I’d do it without question. I still love the guys and look back on those days with a great deal of sentimentality.

What is the biggest misconception about you?

I have a rap for being a control freak. That’s been true in many areas of my life, but I’m also extremely content as a team player and, as my spells with Twisted Sister or Avenged Sevenfold both proved, I can also be a hired gun.

Rush invite you to play drums with them on a tour, but Paul McCartney wants you for his new solo record. Which do you choose?

Geddy and Alex want me for a tour, right? That would be the deal-sealer, as I love playing on stage. Aaarg… what am I saying? Turning down Paul McCartney? That’s the hardest question I’ve ever been asked in my life! Hey, I’m Mike Portnoy… I can do both.

I’ve no funny answer to that. The real response is that after losing my mum in a plane crash, I live day to day by the motto of ‘carpe diem’ [Latin for ‘seize the day’]. Life really should be lived to the fullest as it can be gone in a flash.

Back to the future: Dream Theater's Images And Words 25 years on