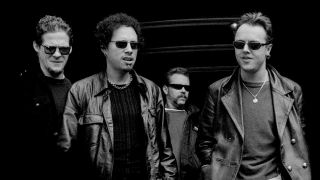 In the autumn of 1998, after a three-album run of Metallica, Load and Reload had seen them evolve from thrash metal’s greatest band to an arena rock behemoth, Metallica set about doing what they do best: blindsiding everyone with something completely unexpected. “Metallica still needs to have fun,” Lars Ulrich told Billboard magazine that November. “We made three pretty serious albums in a row. It was time to do something different.”

Released on November 23 of that year, that “something” turned out to be Garage Inc – a monstrous double-disc collection of covers of seminal rock and metal songs that had inspired the Four Horsemen over the years. While the second disc was a smorgasbord of B-sides from various Metallica releases across their career, the first was a brand new collection of fresh takes on timeless classics. We dissect that colossal first half – with a little help from some of the bands who inspired it.

1. Free Speech For The Dumb – originally by Discharge

It still seems a bold move for the world’s biggest metal band to open a new record with a grinding dirge by Stoke’s most brutal punk terrorists. Once hated by the punk press for their relentlessly basic, bleak noise assaults – hammered out to a frantic stuttering rhythm (the ‘d-beat’,itself inspiring a global subgenre) – Discharge laid the template for metallic hardcore, and were keenly adopted by the metal underground.

There was a 90s mini-industry in Discharge covers among discerning metal bigwigs such as Anthrax, Machine Head and Soulfly, but with this face-ripping opener, Metallica stayed faithful to the original (from seminal 1982 debut Hear Nothing See Nothing Say Nothing), while slowing it down to a metallic grind.

Joining Iron Maiden, Saxon and Def Leppard in the New Wave Of British Heavy Metal, Diamond Head were tipped for megastardom in 1980. Due to bad management decisions and wrong deals, that didn’t happen, but the Stourbridge quartet influenced Lars Ulrich, who crossed the Atlantic to watch them live and hang out. Shortly after, their setlists were getting replicated by a fledgling Metallica. It’s Electric was inspired by an AC/DC concert in Birmingham in 1977.

“This was our 45th song, written in June 1978. Everything before it was scrapped, but this had something special and entered our live set – not that we did many gigs then! It went down well live and was deemed good enough for our debut album [1980’s Lightning To The Nations].”

When did you first hear of Metallica covering Diamond Head?

“In 1982 Lars sent a rehearsal room cassette of them playing It’s Electric. Then in November 1984 I got sent a copy of the Creeping Death 12” with Am I Evil? on the flipside. I was impressed that they’d gone to the trouble to work out, record and release one of our songs – even the solo was pretty much spot on. I had no idea of the potential of Metallica at this point, but I was flattered.”

How’s the relationship between Metallica and Diamond Head in 2018?

“Very strong. In October 2017 I went to see Metallica on their Hardwired tour. It was a brilliant show and I caught up with Lars backstage. Metallica are unrivalled in their field; there is nobody even close. I fully appreciate all that they’ve done for Diamond Head over the years.”

This was the Garage Inc track closest to Jason Newsted’s heart. “Geezer Butler is my favourite bassist of all time,” he told fan club magazine So What! “So needless to say, that was the shit, and the one that I tried the hardest to pay the most attention to be ultra-respectful on.”

From the Brummie metal inventors’ fifth LP, Sabbath Bloody Sabbath, it was an unusually chirpy, loved-up rock’n’roll tune. “It’s that opening riff that just really gets us going,” Kirk said in 1998, when Metallica were still in the studio playing around with the song. “We might try to glue Sabbra Cadabra together with another Sabbath song.” In the event, A National Acrobat was plucked from the same album and interpolated into the mid-section, neatly seguing from a carefree song about shagging to some of Geezer’s weightiest lyrical concerns (although sadly this meant we didn’t get to hear James sing, ‘Lovely lay-yay-yay-yay-deh’).

In an interview with Creem magazine just before he wrote this song for his sixth album, Back In ’72 (released in 1973), Bob addressed why so few musicians had covered his material: “It seems like the only people who do my stuff are these really off-the-wall cats looking for really off-the-wall stuff,” he reckoned.

Since garnering an unfair reputation for radio-friendly MOR, the Detroit singer-songwriter may have seemed an off-the-wall choice for Metallica in 1998, but this emotive ode to the road suited them perfectly; James Hetfield said that the first time he heard Turn The Page, he swore Metallica could have written it. Yet whenever any Metallicat talks about this road-weary ballad, they seem to distance themselves from its creator. “It’s a very odd choice. I’m not a big Bob Seger fan,” Kirk confessed at the time. “But when you hear it, you can really picture James singing it”

5. Die, Die My Darling – originally by the Misfits

It was the ever-discerning, eclectic music-lover Cliff Burton who got Lars, James and Kirk into these New Jersey horror punks, commandeering every tour van stereo and endlessly flipping Misfits tapes. By 1986, barely a Metallica photoshoot went by without a bit of visible Misfits merch, and Last Caress (from Misfits’ 1980 Beware EP) remains one of Metallica’s best-loved covers. Metallica had also jammed Misfits’ London Dungeon since the early days – including onstage with Glenn Danzig in 1994. Here they settled on Die, Die My Darling (originally recorded in 1981, but not released until after the band split up), presumably because it’s just so darn catchy.

Amid these love letters to 70s rock and 80s metal is this brooding alternative epic of obsessive lust, written in 1994 by an Australian gothic art-rock maestro. Loverman was always the odd man out on Garage Inc, but Papa Het made sure he felt right at home. “Cave is extremely evil, whether he’s trying to be or not,” James explained of his quirky pick. “I just love the feel of that song and I knew we could do it properly, that we could do it justice.”

Metallica recorded the song at 3am, burnt out after a long, hard day in the studio, which ideally captured the mood: “It was the perfect vibe to do that track,” Kirk said. “Definitely a high point.”

Contemporaries of Metallica on the nascent 80s extreme metal underground, Mercyful Fate emerged from Copenhagen, Denmark with a devotedly occult but sophisticated and progressive brand of heavy metal, their first, brief phase of activity brimming with some of the mightiest metal tunes ever written. Metallica couldn’t choose just one or two to cover, so they went with five, carefully arranging segments of Satan’s Fall, Curse Of The Pharaohs. A Corpse Without Soul, Into The Coven and Evil to create Garage Inc’s magnificent labour-of-love centrepiece.

When did you first hear about Metallica’s Mercyful Fate medley?

“I didn’t know they were planning it. Lars called me up at home and said to me, ‘Hey, what’s up, we’re recording stuff right now, you wanna hear it?’ I said, ‘Wow, I get to hear stuff from the new one? Cool, man!’ And then he played me the whole Mercyful Fate medley down the phone. He said, ‘What do you think?’ I said, ‘Are you kidding?!’ This was really, really an amazing take on those songs; it just sounded killer, it was so well done.”

How often have you sung the medley with Metallica live onstage?

“I’ve sung it with them at least three times. Once was in Italy while touring in 1999, and the last time was for their 30th anniversary show in 2011 – that was my first time playing live after my heart surgery! On one occasion, Lars phoned while I was buying a car, asking me if I wanted to do the medley live the next day. So I flew home in that new car, and I ran in and put their version on, because it’s different than ours – they have chosen certain verses to play. I can’t just say, ‘I’m singing a part of this and a part of that.’ It’s really their own take on it.”

New York quasi-metal eccentrics Blue Öyster Cult were promoted as the American Sabbath, but their more sensitive charms were evident on monster smash (Don’t Fear) The Reaper. Bassist Joe Bouchard left the band in 1986, drifting into a nine-to-five life in publishing. Then he heard that Metallica were covering Astronomy, a song he’d written for BÖC’s third album, 1974’s Secret Treaties. As a result, he quit his day job and went back to full-time music: “I said to myself, to have this kind of success, that honour of being covered by a famous band, really meant that I should write more songs,” Joe told the website Classicbands.com. Since then, he’s been involved with projects featuring the likes of original Alice Cooper bassist Dennis Dunaway and Doors guitarist Robby Krieger, and recorded a handful of solo records. “I said,‘This is pretty lucky,’” added Joe.“The Metallica record ended up selling about 5 million copies. So, that’s pretty cool.” Yep, you could say that, Joe.

9. Whiskey In The Jar – originally by Thin Lizzy

The oldest song on Garage Inc by about 300 years, Metallica’s arrangement of this trad Irish folk ballad owed everything to Thin Lizzy, whose 1972 version was originally jammed out of desperation after a day of unsuccessful songwriting. Metallica bonded over a shared love of Phil Lynott’s Dublin rock pioneers – Lars told So What! four other Lizzy songs were in contention – but according to Bob Rock, they liked the idea of honouring the band’s overlooked Eric Bell era. “It was one of the most simple ones on the album, because their heart was in it,” Bob Rock told AVClub in 2015. “It was really a live performance of [Metallica] playing it, which you hear, the enthusiasm and the excitement.” Metallica’s version won the band a Grammy, and breathed new life into the 17th-century lyric (helped along by a wild video, set in a raucous, all-female house party).

11. The More I See - originally by Discharge

A 1984 single containing Discharge’s most rocking riff, The More I See presaged the band’s closer involvement with the metal scene. Straddling the line between punk and heavy metal, Metallica had lots of fun with this jam.

When did you hear that Metallica would be covering Discharge?

“Somebody mentioned to us one day, ‘Did you know Metallica have covered two of your songs?’ I didn’t know anything about it!”

Why do you think so many bands cover Discharge?

“Easy to do, innit?! Ha ha ha! The thing is, out of all the tracks I’ve ever heard, nobody’s ever got it right. It’s nearly there, but there’s something missing. Nobody has ever recreated it. Even we haven’t recreated that original sound; it was just a one-off. Lucky day, wasn’t it?!”

How close is the bond between Discharge and Metallica?

“I met ’em a few times in the 80s at CBGBs and places like that. They came to watch us somewhere in London a few years ago; they were playing the O2 the day after. They didn’t speak to us, but they saw us. They tried to blag a free t-shirt, but the person selling them didn’t seem to know who they were, so they didn’t get one!”