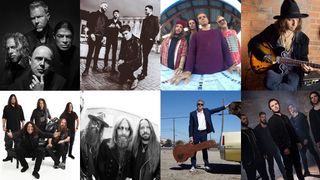 This week’s spread of new rock videos include cars, icebergs and big snakes (well, pictures of big snakes…), all in support of quality rock’n’roll – of many splendid colours, from pretty pensiveness to meaty metal. But which deserves to win? Place your vote at the bottom of this page and decide.

Metallica – For Whom The Bell Tolls (live at Webster Hall)

Some of the heartiest (and most growly) camaraderie can be found in a Metallica queue – like this king-sized one at Webster Hall in New York. Horns are raised, teeth bared and Hetfield-rivalling ‘YEEEAH!’s delivered as previous gigs are cheerfully remembered and one very underage kid gleefully anticipates his first ever ‘tallica experience. We’ll guess he wasn’t disappointed, based on this mighty blast of For Whom The Bell Tolls.

No it’s not Caleb Followill, it’s a bloke from Birmingham – BRW frontman Danny Core, to be exact. Indeed, for a band who’ve never set foot in Tennessee Broken Witt Rebels generate an startling level of Kings Of Leon-esque vibes. They’re no copycats though; Georgia Pine is a sweet taste of the modern South, fresh from the Midlands.

Performed live on an ICEBERG – because what is more ‘rock’ than an iceberg? Exactly: nothing – this prettily mournful ode proves there’s more to Kaleo than soundtracks for Boots No.7 adverts (though the song in question, Way Down We Go, is actually really good…). Lovely, transportive stuff.

Xander And The Peace Pirates – Fire

Singer/guitarist Keith doesn’t have a lower right arm. Such a factor would deter many of us, but Keith is clearly made of stronger stuff – he plays with his guitar pick attached to his prosthetic, and the band have gone on to support the likes of Bon Jovi and Van Morrison. Based on this catchy, bluesy number – with acoustic roots and a sweet soulful guitar lead – we can see why. Check out the album 11:11, out next month.

Ready for some thrashy nourishment? Not in the mood for anything delicate? Good: here’s some brutal, riffy mayhem from Testament to sink your teeth into. Classic, uncompromising and unrelenting – yet fundamentally melodious – it’ll make you want to flee your office job pledging allegiance to guitarist Alex Skolnick (his fretwork here is ace) and the brotherhood of the snake. Or maybe just buy a copy of their album, Brotherhood Of The Snake.

Blackberry Smoke – Ain’t Got The Blues

Their new album Like An Arrow is out today, but how about this for some big hat nostalgia as well? Back when Charlie still had long straggly hair (circa previous album Holding All The Roses, so not that long ago…) they popped into the Google/Youtube HQ for an acoustic performance of this chilled, sweet-as-hell slice of Southerness. Newly released for your listening and viewing pleasure, it’s the perfect antidote to the winter blues (‘coz “I ain’t got the blues anymore”, y’see?).

The video for Magnificent Bastard is not as magnificent as its name (the title of track of his latest album, recorded in Wiltshire with members of London band The Snakes). In fact, it’s quite unmagnificent – it’s basically Tommy driving through his native Dallas. Happily, however, the song itself is a treat; merging Lynott-era Thin Lizzy hints with Texas-baked rootsy rock’n’roll and sunny, more-ish lead guitar.

Having moved on from metallers Rise To Remain, Austin ‘son of Bruce’ Dickinson now leads this band of hard rock renegades. Introspective and intense, but still very catchy, Aftermath is the first single from their debut EP (of the same name) which comes out today. Go forth and check it out…