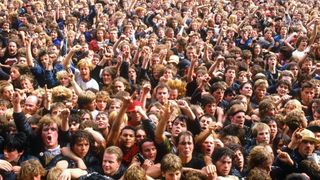 An actual picture of the Download crowd in 2018 (Image credit: Getty Images)

Download. Conceived at Castle Donington in 2003 as the feral, limber successor to the creaky old Monster of Rock festival, it’s grown larger in scope and attendance year after year, mostly by taking advantage of whatever metal/punk trend is muddying up the waters in any particular year.

Which is fine, really. If you want Mudvayne, you should have Mudvayne. You should also be locked in a room with no one to talk to until you straighten up, but that’s a personal bias. But here’s the thing: this year’s line-up gave us a tantalising whiff of former glories, with a last-leg headlining spot by Sabbath, a still-chugging-after-all-these-years show-stopper by Maiden and a few lower-bill spots from raucous old-timers like Megadeth and Saxon.

Anyway, word on the street is maybe next year the mostly-reconstructed GN’R will revisit the glory days of Appetite, and it’s been suggested that Def Leppard could take on High N’ Dry (just kidding, Hysteria). And if that’s the route we’re going, maybe we should take this all the way and restore the Castle as the lair of the Golden Gods.

Let’s face it, we’ve been slurping up new blood like denim-bound vampires for the past twenty years and what has it gotten us, really? The Darkness? Monster Truck? Babymetal? Is that all really the best we can do? We used to walk with fucking giants, man. Sure, the guy from Twin Atlantic is a decent performer under pressure, but no matter what he does in this world from this moment forward, he’s just gonna be the guy from Twin Atlantic. He’s never gonna be Ronnie James Dio. So here’s my proposal: if next year’s “Classic” headliners work out, let’s continue to party like it’s 1980. Or 1987. Or 1979.

So here’s 2018’s line-up sorted. And don’t worry, if it doesn’t work out, Mudvayne will still be available the following year.

I don’t know if you remember, but around 1976 or so, Blue Oyster Cult were one of the biggest bands on the planet with one of the biggest shows on the planet. I still don’t understand what happened, but they’ve been playing shit like obscure casinos and state fairs and fireworks displays for the past twenty years and that’s a crying shame. So let’s get ‘em up on that giant stage and we can all rock the fuck out to Reaper and Godzilla and Burnin’ For You the way we’re supposed to, with recklessly dangerous lasers from the mid-‘70s that can cause your eyes to explode like runny eggs if you look at that them too long.

Alice Cooper - Original band doing Killer and Love It To Death. Turbonegro joins them onstage for Halo of Flies and Alice beats them into a bloody pulp with a giant toothbrush.

Rainbow - Not the “new” version. Graham Bonnet, no pilgrim hats or flutes. Bonnet can do a couple Alkatrazz numbers, Blackmore cannot do any of his medieval garden rock.

Waysted - remember them? Jesus Christ, what a fucking band. Also if Phil Mogg is in the audience and there’s extra time, Pete Way can slide on his stripy spandex suit and do some UFO numbers. Why not.

Samson - I’m sick of Maiden always hogging the artist formerly known as Bruce Bruce. Granted, Paul Samson is no longer with us, but Bernie Torme can handle it, and it’s about time Bruce Dickinson and Thunderstick were reunited. Just make sure they keep Thunderstick chained to his drums, he’s still crazy after all these years. Also Thunderstick’s band can perform their 1983 Feel Like Rock n’ Roll album in its entirety. And then then Maiden can play a couple jams with Paul Di’anno to close out the set.

Ghost - really the only “classic” classic rock band of the past thirty years, so let’s squeeze them in. Also, they’re all wearing monster masks so who knows who’s really in the band? I heard it’s really Sweden’s first metal band Heavy Load behind those Satanic robes, so it’s probably fine.

Saxon - Saxon are in every one of these for now on, forever. So deal with it.

Side stage: Nu Metal in the Moat.

We know there isn’t actually a moat, but we can build one, easy.

The real version. And they can only play Ace songs and Baby Driver as contrition for fake Ace and fake Peter. But we can skip Beth no problem.

Angel & The Godz – opening up for Kiss, just like in ’78, man. Ends in a biker brawl or a keyboard-laden ascent into heaven, depending on who goes on first.

Van Halen – but just the songs where Diamond Dave does splits and says “Yoww!” And Hagar stays outside. In fact, if you show up wearing red you get catapulted out of there.

Black Crowes – but they have to stay on track. No jam band bullshit, Rolling Stones rip-offs only.

Venom – classic line-up (Cronos, Abaddon, Mantas) doing At War With Satan in its entirety and when it’s over Cradle of Filth have to come on stage and publicly apologise for blowing black metal so badly.

Thor – Because the second day of any rock festival should open up with feats of strength and Thor was always cooler than Kiss anyway.

Anybody that uses Z’s instead of S’s. Also every past, present and future member of LA Guns.

Seriously, this should’ve been their gig all along. We let Diamond Head down, not vice versa

Megadeth – Doing No Life ‘Til Leather

Scorpions – Doing the A-side of Blackout over and over for three hours.

Queen (with the Struts guy) – we all want it, man. They can do all their metal hits (Stone Cold Crazy, Sheer Heart Attack, Queen II) to keep with the theme of the day.

Twisted Sister – as long as they don’t do any fucking Christmas songs.

Because Sacred Alien, Handsome Beasts and Witchfynde deserve a second chance too, man.

So there you have it. You’d go, wouldn’t you?

Please support your favourite ageing rockers no matter where you are because without them, you’re gonna have to figure out who the fuck Milk Teeth are.