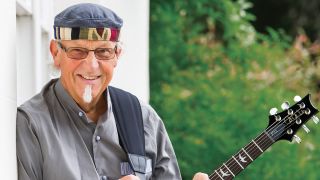 “It’s like a pigeon that’s been locked up in a shed for a few years and then it’s released.It just felt like a huge rebirth,” says Martin Barre, when asked about the creative surge that has yielded three solo albums in two years, including his most recent, Back To Steel.

“It’s like a pigeon that’s been locked up in a shed for a few years and then it’s released.It just felt like a huge rebirth,” says Martin Barre, when asked about the creative surge that has yielded three solo albums in two years, including his most recent, Back To Steel.

“It all sounds a bit pretentious, but I just had this void in front of me when Jethro Tull finished and at first it was a bit intimidating,” he continues. “But then I realised that I had total freedom to do exactly what I wanted to do, so the last four years have been amazing, particularly in recording.”

Barre’s enthusiasm is such that interviewing him feels like talking with a young, upcoming musician rather than the highly regarded, hugely influential guitarist who served for 42 years in one of progressive rock’s premier groups. He claims that Back To Steel is “the most important work in my career as a musician”. The principal reason for this is that he has recorded an album consisting largely of his own songs and Back To Steel showcases him as a fine songwriter. So does he think that maybe he could have explored this avenue before, or did this burst of songwriting come at its appointed time?

Jethro Tull was one of the few bands that never stopped working. I can remember only having one year off. Ever.

“I believe in the latter, but of course I also think that if I’d been doing this is the 70s or 80s, I’d have my own career really established by now,” he responds. “But what will be will be and I don’t have any regrets as we were so busy. Jethro Tull was one of the few bands that never stopped working. I can remember only having one year off, ever, and it was the first year that I started writing music. It wasn’t very good, I hasten to add, but that was the beginning.”

The title track is a mid-paced, bluesy excursion with some searing lead guitar lines, while It’s Getting Better is a high velocity song with a mercurial structure, with Barre riffing on electric guitar and playing intricate lines on mandolin, while the twisting vocal melodies are sung by Dan Crisp and female backing singers Alex Hart and Elani Andrea. The songs are very strong, so how did he make this considerable step up in his songwriting? Was it craft, or for want of a better phrase, a location of his muse?

“Both those things are right and I truly believe that it’s something you have to learn how to do,” he replies. “With learning guitar or piano, you’ve got strict guidelines of where you’ve got to go, but with songwriting, people either like what you do or they don’t: you have to do what’s in your heart.”

Barre has ruled himself out of contention as a singer, though, reckoning with some reluctance that it’s a bit late in the day to try to excel in that particular field.

“It’s not something I could start doing now. I’d have to go through a very dark period of being rubbish and I can’t afford to do that at my age,“ he says, laughing. “I didn’t with Tull because there wasn’t the need. And I don’t know why not, really, because there were a lot of harmonies in some of those albums, particularly the Songs From The Wood-era. I like writing the parts, but I can’t perform them – I’ve got enough to do with the guitar.

“That’s one of my great pleasures, arranging music, and that’s part of a musician’s job. But in the band the musicians have a plain sheet as far as their parts are concerned.”

Then there’s the matter of writing lyrics: “I’m confident with the music because I know what I write is going to be okay. I’ve got lots of knowledge and I’ve got a pool I can draw my music writing from. But I’m under pressure to make the lyrics as good as I can, so I spend lots of time on them. It probably took me longer to do the lyrics than the music and I’d rewrite them so many times. My wife has a huge collection of CDs and I’d grab one, open up the artwork and read the lyrics and think, ‘You know, I shouldn’t be worried’. Because essentially when you are just reading lyrics, it’s not enough, but as soon as you add the melody and the vocal quality to it, it changes into another thing.”

There are also some acoustic numbers such as the lovely, baroque- flavoured You And I, with the female vocalists duetting and the guitar picking reminiscent of John Renbourn, and the more animated instrumental Calafel. Does Barre listen to, say, Bach’s lute suites or particular folk guitarists?

“I’ve been listening to Vivaldi’s mandolin concertos. They are just fabulous,” he replies. “I love folk music: some of the virtuoso mandolin players and whistle players are a delight to listen to. They don’t so much influence me as inspire me to improve as a mandolin player. Of course, I know [Fairport Convention bassist and mandolinist, and former member of Tull] Dave Pegg really well and because we’ve been such good friends for a long time, that’s come into the equation.”

Barre includes a number of Jethro Tull songs in the band’s onstage repertoire, including
Fat Man and Sweet Dream – even sections of A Passion Play – and on Back To Steel he has recorded versions of Slow Marching Band from 1982’s Broadsword And The Beast and Skating Away On The Thin Ice Of A New Day from Tull’s 1974 album, War Child.

The original Skating… builds up, with accordion, glockenspiel, guitars, bass and drums gradually introduced into the mix. On this new version, Barre strips that back, clearing space in what was a very busy, detailed song. He comments that both he and the other group members were all active in arranging songs for Jethro Tull and this is another, later, take on the song. “I’m not trying to replicate them or rewrite them, but it’s my take on them,” he explains. “They’ve worked well on stage and when we do gigs I want to have that Tull connection, but I want it to be my connection, so that’s my way of making it a bit more fun for me, and the audience hear the same song with different clothes on it.”

Barre is endearingly modest about his abilities, but has an impressive list of US hot-shot guitarist admirers including Steve Vai, Joe Satriani, John Frusciante and Joe Bonamassa. “Great players, but I’m never going to play like them,” he says. “Everyone has something to say and has their place in music – a whizz-kid guitarist or someone who plays a bit and sings. I’m more comfortable with who I am and I don’t feel intimidated by other musicians as I used to years ago.”

Like almost all his generation, Barre started off as a blues player. But it’s a genre that he believes has lost its way somewhat.

“The 1960s spawned a whole era of players who were just trying to emulate what BB King and Buddy Guy were doing, but they missed the point that blues is as much about note placement and how that note sounds. To me the blues is far more complex and there were so many bad blues players, particularly in England, that it lost its popularity.”

In November, Barre and his group are playing Cruise To The Edge. “It always sounded great to me – a festival on water. Allan Holdsworth is playing, Marillion and Yes. It’s only five days – if it were longer I might jump over the side,” he quips. “But I’m more comfortable around other musicians than I used to be, so it will be fun.”

He is also delighted to have secured a month of US dates following the cruise, and his 2016 diary is filling up. This time, the Back To Steel album will be the centre of the music played onstage. “We are planning to do a lot of dates, especially in the UK; we are going to be working really hard to promote the album. This year has been a bit quiet, but next year is going to be the big year.”

Back To Steel is out now on Garage Records. For more information, see www.martinbarre.com.