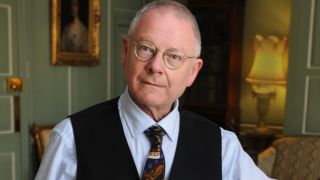 My wife Toyah [Willcox] is my first love, and I kissed her toes.

How did you meet her?

I’d met her at EG Records headquarters in 1985, and I fell in love with her working on a charity album called The Lady Or The Tiger. I said to some friends in New York just after: “I have a funny feeling about this one.” I went back to England and proposed to her within a week. My father also proposed to my mother in a week.

Was that in your subconscious?

No. I was looking out of a window at Fernhill House in Witchampton, the Fripp family village in East Dorset, and I thought: “Yes, this is my wife.”

How did you court Toyah?

We didn’t know each other, because I’d been in New York during Toyah’s very successful early years, so I didn’t know any of her work. And she didn’t know anything about me, except she was a Bowie fan so she knew the couple of albums that I was on. In the knowledge that ‘this is my wife’, I had to get to know the person that my wife is. That might sound a little unusual. That’s how it was for me, and how I work anyway. If you see it, something becomes possible and then you move towards it.

Did your work life get in the way of your relationship, or vice versa?

When we married I felt we were side-sewn. So why was I not there? King Crimson was primarily the act of performance. My wife knew this aspect, but on the other hand it was: “Now he’s gone off again.” It was hard. We weren’t together enough. So on December 4, 2010, on my last performance as a working musician, I came home, and around February 2012 for the first time in my life I was happy.

You’d not been happy for all that time?

My aim in life was not to have a happy life. My aim was to receive a broadly based liberal education. There I am as a young man studying economics at Bournemouth College, thinking: “Am I going to change the world doing this?” Rather than go on to university, with digs already booked in Acton, I became a professional player.

My musical and professional life has been characterised by dispute. It was wretched. There were high spots, certainly, but a long way from happiness.

Crimson do have a few love songs.

Yes. There are quite a few male Crimson characters who loathe them. I remember correspondence from a fan in 1981 – “Why Matte Kudasai?” There’s been a recent one too, bleating on about other Crimson love songs.

You could record King Crimson: The Love Album.

I’ve considered that in the past. But with iTunes you could build that playlist. Would Moonchild be the first? Cadence And Cascade, that is a winner. Matte Kudasai remains a stunner for me. And The Power To Believe, by Adrian Belew – ‘She gave me back the power to believe’ – is wonderful, wonderful.

You famously appeared on TV on All Star Mr & Mrs. How did that come about?

This came from Toyah’s camp. My basic view is that I’m very happy to bear witness to my marriage. That was my motive, but also to have fun doing it. It was stunningly well-presented. We were given a very good dressing room. My wife said to me if I were on my own they wouldn’t give me a dressing room as good as this.

_It was quite a surprise to see you on something like that. _

You haven’t yet seen Through The Keyhole with Keith Lemon.

You’re not on that too, are you?

Oh yes. They visited the house in May. The town stopped, there was a crowd of two hundred outside the front door, and the local paper, the Bredonborough Weekly Inquisitor, had Keith Lemon on the front page. I don’t make a personal appearance, but Toyah went in last week to film her segment. She had fun with it, I believe.

What’s the secret of a happy marriage?

Okay, what would you say is the essence of a happy marriage?

Commitment to that person. It’s not a question of what can my wife do for me, but how can I be what my wife really needs?