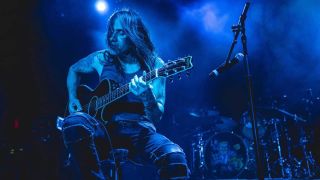 He’s the man that wrote the smokin’, hip-swinging Get The Funk Out solo. He also penned the archetypal lighters in the air acoustic ballad that is More Than Words. Oh, and since 2009 he has toured the world providing the riffs for Rihanna’s sugar-coated pop live show.

So, it’s fair to assume that Nuno Bettencourt knows his stuff when it comes to all things guitar and guitarists. Here’s his five Essential Guitar Albums.

“For me what I always loved in a record was a mix of the guitar work but also great work from the whole band. But, I think from a guitar sound perspective Van Halen affected me a bunch of times. Van Halen’s first album was big for me. That showed me the kinds of sounds you could get out of an amp.

“It has great playing but also amazing tone. That album was a breakthrough for me and for a lot of people from my generation. That wasn’t the first guitar album that I loved but it was so important in terms of tone.

“The sound of that album was so alien to me that it might as well have been a spaceship flying over my house. Before that I loved Queen and Led Zep and you knew that was guitar. Then, all of a sudden I heard Van Halen and thought, ‘What is going on here?!’ It was a whole different world. The attack on that album is fantastic. The whole band was great as well, the songwriting was crazy.”

“Queen came before Van Halen for me. I loved Brian May. Queen II was a big album for me. There was something about the tone of that record that was really unique.

“For me it is a toss up between II and A Night At The Opera for a Queen record to make this list. On A Night At The Opera you hear these big guitars but I think Queen II really blew my mind with how Brian May played solos and how heavy it sounded. It was a different tone to what I had heard everyone else doing up to that point so in that respect Queen II is definitely a big album for me guitar-wise.”

“Without a doubt I have to choose Led Zep’s first album. That album redefined everything. It was riff driven but also really raw. It had that raw guitar tone.

“That was another big album for me which is why it is crazy to think about meeting Jimmy Page. It’s like the kind of thing you talk about with your friends when you’re 15. You say you had a dream last night and you were in London playing and show and before you go on Jimmy Page walks into the dressing room and he tells you he wanted to see your band in a theatre.

“That happened five or six years ago. He just walked in, Jimmy fucking Page. He shows up and you think he might stay for a couple of songs. You look up at the balcony and all of a sudden John Paul Jones turns up as well. I say these things out loud but I still can’t even believe they have happened.”

“Back In Black was another album that guitar-wise taught me a hell of a lot. That record showed me the power of guitar within a band and the power of just power chords and open position chords. That album showed me how powerful space can be in a song.”

“On the guitar player’s side I don’t know if this is more about the sound or about the playing itself, but there was an album called Electric Rendezvous by Al Di Meola that I listened to a lot. That album really had an impact on the way that I played.

“But then if I look at it from another view and look purely at it from a technical guitar perspective rather than bands then I would have to also mention the Rising Force album by Yngwie Malmsteen and also Passion and Warfare by Steve Vai. Those two are major guitar albums, they can be my 5a and 5b choices because they’re more from a playing perspective whereas the other ones are more from a guitar sound perspective.”

A live DVD celebrating Extreme’s Pornograffitti is released on September 23.