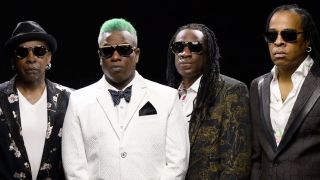 Living Colour’s new video for their cover of deceased rapper Biggie Smalls’ controversial song Who Shot Ya? is hugely important for two reasons. First, it turns what is generally perceived to be a ‘diss record’ glorifying gun violence on its head, reinventing it as a plea for US gun death madness to end. Secondly, it finally marks an American rock band stepping up to the plate and getting overtly political in 2016.

Yet what is most surprising – and frankly worrying – is that it’s taken a group that’s been around for over 30 years and features four guys in their 50s to get angry about guns. And Living Colour’s musical outrage focuses on just one of a number of deeply disturbing social issues we’re currently grappling with.

But you tell me. Where are the new young radicals in rock, prepared to make music that truly makes a stand?

Where are the artists who make protest music because they simply have to vent the rage they feel inside about the injustices they see all around them? It seems almost counter-intuitive that older musicians are more outraged than younger ones about the wrongs in our world today. Isn’t it the young who are supposed to be driven by passion, by belief? Isn’t it the oldies whose fires should have naturally dimmed? It wasn’t that young bands of the ‘60s and ‘70s like The MC5, The Stooges and The Clash cared little for success. But they wanted it only on their terms. They demanded that their voices were heard. Has the Internet, Instagram, selfie generation become so self-obsessed that it simply doesn’t care about other people’s problems? Katy Perry’s excessive interest in her Daisy Dukes and bikinis on top might indicate yes…

Yet maybe the seeds of that self-obsession and posturing can actually be traced back 1995, when East Coast rapper Smalls first released Who Shot Ya? in 1995, pre-empting the death of his West Coast rival Tupac Shakur a year later. After all, the original was equally self-absorbed, though undoubtedly less glossy. Smalls’ words were full of vitriol and bile…

What’s interesting is that Living Colour vocalist Corey Glover deliberately turns away from the macho posturing apparent in the original. Both Biggie and Tupac died in drive-by shootings within a year of each other in 1996 and 1997. So instead, Glover’s furious delivery focuses on “how easily black bodies are thrown away with such frequency.” Who shot ya? indeed.

The names of people who have all been lost to US gun violence are also given air time onscreen. Many we may not know, but we all recognise Dimebag Darrell Abbott, John Lennon, Kurt Cobain, Marvin Gaye and Tupac Shakur. All musicians. All dead from guns.

It’s true that Living Colour aren’t the only angry voices out there right now. The Prophets of Rage say, “dangerous times demand dangerous songs.” Suicidal Tendencies’ new album World Gone Mad is politically charged, as is Marillion’s new release FEAR (Fuck Everyone And Run). But again, these are acts that have been around for decades.

Let’s hope the outpourings of justified anger from the old stagers will galvanise new young rock bands to engage with politics and make a stand of their own. Music has a long and valued tradition of speaking out. We need it now more than ever…