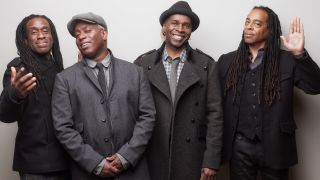 Living Colour are marking three decades on the rock 'n' roll frontline with a new album and tour.

The two-time Grammy winners are hitting the road in September to support their much anticipated new album Shade.

With a proposed release date of “the fall”, fans of the band don’t have long to wait for what will be the band’s sixth studio album.

Guitarist Vernon Reid says the new record’s style is reflected in the title, adding: “Shade is the sound of a band coming to terms with its shadows and light.

“From the blue pulpit of Robert Johnson to the mean red streets of Brooklyn to the golden lure of Hollywood, Shade is the next chapter of a unique American journey.”

Livng Colour’s last album was 2009’s The Chair In The Doorway. They kick off their North American tour in Ontario in September.