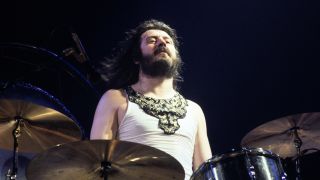 John Bonham influenced me at a very early age. I was maybe 10 years old at the time. I was just learning to play drums. To me, that music from the late 60s, early 70s, that hard rock blues music, was very influential.

My brother was two years older than me and he played guitar. Jimmy Page was his hero. My brother had a great collection of records by The Who, Zeppelin, Black Sabbath, Deep Purple, and Cream. He first turned me on to that kind of music.

I liked all the drummers, by people such as Ian Paice, Ginger Baker and Bill Ward – even though Sabbath were so heavy, were a little lighter in their technique than Bonham. It was the sheer power of Bonzo that appealed to me. And his sound! I’d never heard drums with that sound; Page’s production was important of course. Bono had depth and air, and he played so musically. The way he played around those Page riffs with such power, musicality and finesse was very impressive.

I think Jimmy Page was right to call an end to Led Zeppelin when Bonham died in 1980. Right there, it shows you here’s a guy that’s irreplaceable, both as a person and as a musician.

I’ve been to Bonham’s grave. It’s out in the middle of nowhere in Rushock, a beautiful village in the Black Country. I managed to recognise it because there was a good slew of drumsticks sitting at the bottom of his stone. It made me really sad. Such a waste of life.

Led Zeppelin: "There were no horizons to what we could do..."