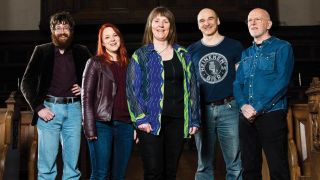 As relationships go, folk and prog have a long and honourable one. The acoustic-electric marriage has produced some of the finest moments in progressive music, from the Fairports’ and the Strawbs’ early experiments, through the majesty of Tull’s pastoral period and on to the strange sounds of Hexvessel and Crumbling Ghost.

Twickenham-based Kindred Spirit are making their own contribution to that history. At the heart of proceedings is singer and main songwriter Elaine Samuels. Samuels has honed her skills over the past 20-plus years, slowly drawing in musicians to generate the Kindred Spirit sound: part Curved Air, part Tull, part Moodies, rounded off with an acute sense of storytelling.

Samuels has quite the story to tell. “I started as a folk performer in the clubs when I was about 13,” she says, explaining how she was dissatisfied with the life of a simple folky. She’s a smart cookie and holds a degree in engineering. Indeed, she says, “I’m fascinated with science,” and this is reflected in the complex musings of their songs. But, ever keen on synthesising ideas, Samuels is also passionate about design. Indeed, she designed the striking pentagram and flame Kindred Spirit logo. “The five-pointed star is the structure of the band and the flames are the spirit – the expression and music.”

Samuels sticks with scientific metaphor as she explains the band’s evolution. “It just condensed around me,” she says. Over the past few years Kindred Spirit moved from duo to trio and on to its final five-piece. Yet, as she acknowledges, it’s been difficult – despite contributions from stellar musicians like ex-Judas Priest drummer Les Binks – for the Kindreds to achieve the recognition their talent deserves. Even after their crisp, conceptually smart latest album 2015’s Phoenix Rising, they’ve too often been treated as neither one thing or the other.

“My songwriting is not really folk because it’s full of expansive ideas,” says Samuels. “Folk is more interested in the history of, say, someone’s job, so I wasn’t flavour of the month in the folk world.” By the same token, she’s not felt at home in standard rock. And while Samuels has always been a prog fan – “I really love Yes and Genesis, Peter Gabriel” – it’s been a revelation to find a warm welcome in the prog family.

“Two things have catalysed an amazing change for us this year,” she explains. Firstly, the Kindreds played at prog Four Play Festival. Here they met that kind and astute gent, Stephen Lambe, who as co-promoter of Summer’s End has done a huge amount to raise the profile of prog. His support gave Samuels fresh confidence. The second factor was the contribution of new violinist Martin Ash. “He’s super keen and very passionate. We realised that though we’re not really at home in the folk world or the rock world, the prog world will embrace us.”

Samuels and Kindred Spirit have, in short, relaxed and started to stretch their wings. Working with classical musicians like Emily Nash has brought greater discipline to their sound. “Classical musicians provide a texture underneath, setting the story and images free.” Samuels has also been writing new material based on the Book Of Revelation. “I love the three Omen movies,” she says. The band’s upcoming work, then, might be even more complex and ambitious than Phoenix Rising.

The Kindreds are looking forward to getting out on the road. In addition to a return to Four Play, they have a special show at All Hallows Twickenham on March 25. The combination of dark themes and holy setting promises to be one hell of a combination. Either way, Samuels is clearly at ease with herself. As she says about her place in prog: “I feel like we’ve come home.”