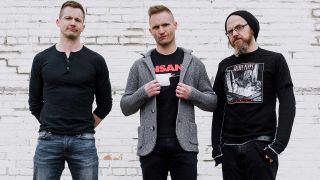 Crushing Canadian hardcore trio KEN Mode are premiering their new album Loved exclusively with Metal Hammer. It's a dark, bloodcurdling, maniacal journey into the deepest recesses of despair and anxiety. In short, it ain't a cheery listen.

Flirting with noise, post, black metal and even a bit of jazz, KEN Mode dive headfirst into a tarpit of experimental brutalism. And it's brilliant.

Check it out below!

But Loved isn't just musically dark, the artwork itself is a striking, sinister image, adding to the pitch-black emotional heaviness of the record. The cover was designed by Randy Ortiz, an artist who the band have known through the Winnipeg music scene for years, working together initially on gig posters and t-shirt designs, before doing the full album art for 2015's Success and new album Loved.

The cover image itself comes from Randy's 2016 piece Happy Person Having A Pleasant Conversation In Public, a title oozing with sarcasm at the abject fear and anxiety painted across the subject's face.

"With both Success and Loved, we’ve worked with [Randy] from the beginning conceptual stages of those albums to produce an all-encompassing package that fits in line with the aesthetic of the musical and lyrical content, though each were in opposing order," KEN Mode vocalist Jesse Matthewson tells Metal Hammer.

"With Success, the concepts were laid out early, but the actual art pieces were made as we were recording the album proper, while with Loved our entire album was influenced by the cover piece Happy Person Having A Pleasant Conversation In Public. We knew from the moment he posted it that we needed this to be the cover to our next work, which we had earmarked shortly after we’d finished recording Success. For Randy, we know the piece is a bit of an encapsulation of his relationship with sleep paralysis, but for us, it’s come to represent the face of ‘responsible’ adult life in 2017/2018."

Randy printed stickers to promote Happy Person... one of which was stuck to Jesse's dresser, which would stare out at him every morning for the entire year KEN Mode were working on Loved.

"I felt like this ritual encouraged an artistic arms race, where we had to create an album that would live up to the ecstatic nastiness of this image," says Jesse. "We were also just generally fed up with much of what life in 2017/18 has come to represent, working in the music industry in general, and wanted to create something wholly noisy and ugly, yet with an underlying humour – because if you’re not laughing these days, you’re probably crying."

Last year, Randy went through a nasty breakup. The brutal artwork that followed has been adopted by KEN Mode for "layouts and merchandise" as they fit into Loved's aesthetic perfectly.

"We feel like the despair he was feeling coupled well with the general state of despair that seems to be punishing a large number of people over the past few years – specifically the artistic community," asserts Jesse.

"It’s no secret that our technological environment has stimulated and extremely polarised the political landscape, which seems to breed hyper-sensitivity with people on both sides of the spectrum. Not to mention the anxiety and depression-inducing nature of the 24-hour news cycle and ‘push notification’ culture. With the reigning in of the Trump Administration in the US, the more left leaning artistic types – who tend to feel more strongly than your average citizen to begin with – are really experiencing an emotional strain, which will obviously be seen in their art."

To get a deeper understanding about the artwork, we had a quick chat with the artist himself, Randy Ortiz.

What is it about KEN Mode that attracted you to work with them?

"I’ve been friends with the Matthewsons for many years; I've seen KEN Mode grow and continually reinvent themselves by pushing through plateaus that most listeners think they could never break through. In a way, it sort of mirrors my career as well. The parallels we’ve had as artists created a mutual understanding of the creative process and in turn, makes it very easy to work with one another. That’s why I never hesitate to collaborate with them."

How did the idea for this cover art come about?

"These works were created prior to the creation of Loved. The cover is my depiction of a dark figure who shows up during my occasional nightmares during sleep paralysis. I like to think he’s the manifestation of my social anxiety and overall uneasiness when dealing with stress in a public space, thus the title of the piece. He’s what I feel I look like when talking to every day people outside of my apartment. The rest of the album is made from pieces I created during a post break-up/self-loathing session. An embarrassing breakdown of my sense of self, fully committed to paper and for all those to cringe at. At the time it was what I felt being loved meant in its truest sense. A dark pathetic lie. I’ve since been steadily going to therapy and I’m doing much better now, I assure you."

How do you think that the artwork ties into the themes on the record?

"Just look at the illustrations and listen to the music – they are made for each other. A guttural mess covered in spit-moistened charcoal. The crunchy grit I felt in my teeth as I inhaled the black carbon and ash from making this work, representing the noise they’ve created but exhaled and shot out in reverse. It’s perfect."

Loved is released August 31 and available to pre-order now.

KEN Mode are touring Europe later this year with Birds In Row and Coilguns.