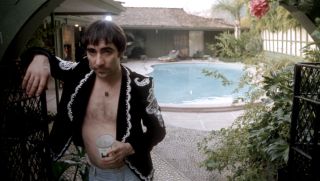 (Image credit: "A Rolls Royce in a swimming pool? You got the wrong man, occifer...")

The Holiday Inn in Flint, Michigan was the site of one of the most notorious examples of extreme rock ’n’ roll behaviour in history.

The drummer had already left a trail of chaos on the road, diving into swimming pools from hotel rooftops and blowing up toilets with cherry bombs, but it was in Flint where his behaviour reached its peak.

Following a large-scale food fight, the evening’s entertainment reached its climax when Moon steered a Lincoln Continental into the hotel’s swimming pool. Or at least that’s what he claimed he did…

Harvey Lisberg [manager, Herman’s Hermits]: Keith was bonkers. He had two personalities – one was wild and insane, and the other was a superb musician.

Peter Cavanaugh [DJ, WTAC Radio, Flint, Michigan]: I was at the show with a bunch of listeners, some of our DJs and some Detroit radio people who had come up. The Who just destroyed the stage. Everybody was blown away. After the show we went to The Holiday Inn.

Barry Whitwam [drummer, Herman’s Hermits]: It all started very innocently. It was Keith’s birthday party, and one or two birthday cakes had been delivered for him.

Keith Moon [speaking in 1972]: The Premier Drum Company had given me a huge birthday cake with, like, five drums stacked up on top of each other.

Barry Whitwam: The whole tour gathered in the dining room to view all the cakes. Everybody was ready for a party. Keith Moon put his plate down on the table and stuck his finger into the cream on top of one of the cakes and casually flicked it at [Hermits bassist] Karl Green who was standing next to him. The cream hit Karl in the face and everybody laughed – apart from Karl, who stuck his finger into the nearest cake and flicked some back into Keith’s face. Within seconds everybody in the room was throwing cake at each other. It only took five minutes to change the room into what looked like the inside of a cake.

Tom Wright [photographer, road manager]: The manager of the hotel comes up to Keith and tells him that this will just not do: “We’re going to have to stop this, right now”.

Keith Moon: As the party degenerated into a slanging match, I picked up the cake – all five tiers – and hurled it at the throng. People started picking up pieces and hurling it about. Everybody was covered with marzipan and icing sugar and fruit cake.

Tom Wright: I knew that wasn’t going to sit well with anybody. I told him [the manager] we’d wind it down and so on, and he left.

Peppy Castro [guitarist, the Blues Magoos]: The swimming pool had tons of broken glass in it from Keith throwing bottles in the pool. I was pissed off because of the damage he was causing.

Keith Moon: Half-a-dozen cars were parked around this swimming pool. I ran out, jumped into the first car I came to, which was a brand new Lincoln Continental. It was parked on a slight hill, and when I took the handbrake off it started to roll, and it smashed straight through this pool-surround fence, and the whole Lincoln Continental went into the swimming pool – with me in it.

Keith Moon: So there I was, sitting in the driver’s seat of a Lincoln Continental, underwater. And the water was pouring in – coming in through the bloody pedal holes in the floorboard, squirting in through the windows. In a startling moment of logic, I said: “Well, I can’t open the doors until the pressure is the same”. It’s amazing how I remembered those things from my physics class. So I’m sitting there, thinking about me situation, as the water creeps up to me nose. When there’s just enough air in the top of the car to take a gulp, I fill up me lungs, throw open the door and go rising to the top of the pool. So I went back to the party, streaming water.

Barry Whitwam: There was no car in the pool, only all the pool tables and chairs, and Keith never came back dripping water.

Tom Wright: At one minute after 12, the hotel manager comes running back and says: “Goddamn it, this sounds more like a revolution than a birthday party…”, and you can’t do this and you can’t do that. He was just about to go into a big deal when Keith picked up what was left of the five-tiered cake and just shoved it into this guy’s face. Everybody in the room just went silent.

Barry Whitwam: Not satisfied with that, Keith went over to Karl Green, ripped Karl’s trouser leg from the pocket down to the knee, and laughed in his face as if to challenge him. So Karl walked up to Keith and pulled his trousers down so hard that the stitching ripped in every seam, and there Keith stood with no trousers. His underpants had been pulled down with his trousers and, to make it worse, he was only wearing a short T-shirt that didn’t do anything to cover his embarrassment.

Everybody thought this was hilarious, apart from the police officer who, up to this point, was supposed to be guarding us from the outside world. When he saw Keith’s private parts, he pulled out his revolver and walked over to Keith to arrest him for breaking the law in Michigan State. The funny thing was that the officer was still pointing his gun at Keith’s manhood.

Keith Moon: I ran. I started to leg it out the door, and I slipped on a piece of marzipan and fell flat on me face and knocked out me tooth.

John Entwistle: He was so pissed, he tripped and fell over and smashed his teeth.

Nancy Lewis [US publicist]: He was so out of it he wasn’t even aware what happened. He had to be rushed to the dentist. John Entwistle: They operated on him without any anaesthetics, cos he was drunk. Keith Moon: So he had to rip out what was left of the tooth and put a false one in.

John Entwistle: While we were at the dentist’s, the rest of the tour got extremely drunk and started spraying the car park with fire extinguishers.

Karl Green: We ended up having fights, raids with fire extinguishers, ripping the railings up around the pool and throwing them in, ripping vending machines off the walls to get crisps.

Barry Whitwam: Peter Noone and I decided to help clean off each other’s cake by using fire extinguishers. Little did we know, but the extinguishers had a chemical in the fluid that would remove the paint off cars.

Peter Noone [singer, Herman’s Hermits]: This fire extinguisher takes all the paint off the cars. So there was a big bill.

Barry Whitwam: Keith Moon was credited with most of the damage to the hotel but, in fact, he had very little to do with it.

Barry Whitwam: We were hit with a $25,000 bill for new carpets, wallpaper and ceilings.

Peppy Castro: The stucco ceiling in the restaurant of the Holiday Inn had to be redone because of all the cake that was thrown on it. Keith Moon: Six of the cars had to have new paint jobs off. We’d also destroyed a piano. Reduced it to kindling. And don’t forget the carpet. And the Lincoln Continental in the bottom of the pool.

Peter Noone: That never happened. He would tell stories. He just forgot what happened.

Roger Daltrey: I saw it. We paid the bill [for the damages]. It was $50,000. It’s vague now, but I just remember the car in the pool. But then I read in the biography that never happened, so maybe I’ve been living someone else’s life, I don’t know.

Barry Whitwam: There’s no way Keith could have driven a car into the pool that evening without me knowing about it.

Peppy Castro: I personally didn’t witness Keith drive a car in the pool. So if it did happen they must have dragged the car out rather fast. I was there

John Entwistle: He never drove a car into the swimming pool. He couldn’t even drive.

This article was published in Classic Rock 175.

What's it like to grow up with Keith Moon for a dad?