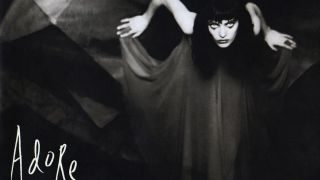 Adoration – Musings on a Masterpiece

The first time I heard The Smashing Pumpkins’ Adore was in my school’s sixth form common room. My friend Ben had bought it the day before – on release day – and brought it in at lunchtime to play on the portable CD player that was in the corner. I remember sitting listening to it and, from the moment the hushed, melancholy tones of To Sheila started the record off, I loved it. Ben, on the other hand, absolutely hated it. He wanted more of the same rough if beautiful, raucous if orchestrated, grunge-tinged alt.rock that had, until that very day, defined the band’s sound. Perhaps because I didn’t have any expectations. My little knowledge of the Pumpkins extended to a few songs (Disarm, Today and one or two I can’t remember) a girl had put on the other side of a bootleg cassette version of The Offspring’s Smash. They were good – great, in fact – and I would fall in love with the band in a big way maybe a year or so later and become bootleg obsessed with them – but at the time I was more into Bruce Springsteen, Jawbreaker, Eels, Modest Mouse and a whole load of other stuff that they didn’t mean everything to me. That’s probably why I took to Adore so well. I didn’t view it as a continuation of their legacy, but as an album in and of its own right, the first one I’d heard in its entirety and one which was shaped by situations I only came to understand later. That’s why now, some sixteen years later, I’m relishing its reissue – not just because of the deluge of bonus tracks, but because it should hopefully allow the album to reassert itself as one of the best – maybe even the best – in the Pumpkins’ catalogue.

That’s not to diminish either Siamese Dream or Mellon Collie & The Infinite Sadness. Both are incredible pieces of work, of art, of music – the latter one of the true times you can accurately describe an album as a true tour de force – but listening back to Adore now I find it hard not to place it up there with both of them. As a good friend of mine always says: it’s not wrong, it’s just different. And just because it’s different doesn’t mean it’s not worthy. And truly, perhaps more than any of their other records, it was an album born out of its own circumstances – the heroin overdose that left touring keyboard player Jonathan Melvoin dead and got Jimmy Chamberlin kicked out of the band, as well as the inter-band struggles that arose as a result of the pressure of fame and their inability to cope with it. Yes, they deliberately set out to do something totally different from what they’d done before, but you can bet it was as much out of necessity as desire. But listen to the sublime and gentle lilt of To Sheila, the electronified sleaze and menace, respectively, of Ava Adore and Pug, the forlorn resignation of For Martha, the sheer magnificence and melancholy of Shame and the abject, piano-led heartbreak of Blank Page. Those last two songs alone are some of the greatest in The Smashing Pumpkins catalogue, but they’re also part of a much greater whole. It might have been divisive at the time, but, oddly, there’s absolutely no doubt that Adore is the band’s most cohesive album. A six CD, one DVD reissue might seem extreme, but I don’t think it is. Okay, maybe having both a stereo and a mono remaster is unnecessary, but, really, Adore is an album well worthy of such a lavish reissue. I fell in love with this album back in 1998, but it’s happening all over again – and it feels just like the first time.