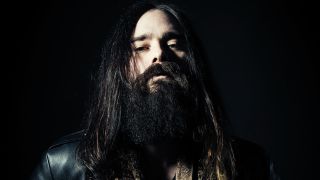 “Driving in the restricted lane, drugs and public intoxication. Is murder wrong? I do that internally all the time. I’m a true crime aficionado so anything you can get away with is fine. I have this therapy where I plot the whole thing in my head so I won’t do it in real life. I just love killing!”

“That has to be Kill ’Em All by Metallica. It’s still the coolest thing I have ever heard – Metallica kick so much ass. My mom found a CD case of it lying in the road when I was young and I clearly remember seeing that cover with the bloody hammer.”

“I am impervious to injury. I got hit by a car once but I only fractured a tiny part of my elbow. I wasn’t paying attention on my bike so I got hit by a Buick and I landed on the car. In lieu of getting the driver’s insurance details, I got her to put my bike in the trunk and take me home, which probably wasn’t the smartest idea.”

“I got ketoacidosis four years ago and I was in the hospital for six days. I lost all of my weight except my skeleton and organs so I was nine stone six – my body was eating itself like some unfunny zombie joke, and it shut down out of trauma. There’s nothing more metal than your own body cannibalising itself. Step aside, Phil Anselmo.”

“Probably milk. It’s thick, white, frothy… it has always been gross to me. It’s meant to make a calf gain 14 stone in two months and we drink it like it’s cool. Imagine if it came straight from the source and onto your breakfast cereal – you would soon think differently about it.”

“I’ve had to pull a knife on someone before. It sounds terrible but I had to defend myself. It was a power move to get them to fuck off. I try to be a peaceful guy now, though, what with my superhuman vegan strength – with great power comes great responsibility.”

“I’m a diabetic, which is the most metal answer – I prick my finger three times a day and then I drink my own blood afterwards. I also fell off my motorbike recently with my lady on the back and we slid 100 yards on the wet road. That was crazy.”

“It’s the most metal thing ever – an old Elton John shirt! I wore it onstage last night and he was playing across the road from us. Also, we toured with Sevendust back in the day and [frontman] Lajon Witherspoon liked a necklace I had so we made a trade. I now have a rare turquoise bracelet from the man himself.”

“My neck was the worst. My feet were pretty awful but the neck really took the cake. They’re all worth it but that vibration so close to your face is horrible.”

What’s the most metal picture on your phone?

“I went to see the Lemmy statue at the Rainbow Bar in LA and I got a picture with it. Apparently it’s true to size so he must’ve been quite short – he looked like a 100ft tall monster onstage.”

He Is Legend’s new album, FEW, is out now via Spinefarm

Schuylar beasts our test! To be honest, after some of these anecdotes, we’re too scared to give him a lower score anyway.

He Is Legend - Few album review