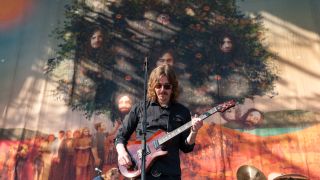 Dream Theater’s John Petrucci gives us his reasons on why he loves Metal Hammer cover stars Opeth. And if you love the prog-metal heroes (which we’re sure you do), pick up the latest issue here.

BLACKWATER PARK IS A MASTERPIECE

“I got turned onto them a while ago and I think maybe Brad Tolinski from Guitar World was like, ‘You have to hear these guys!’ And then I got really into them. The first album I got turned onto was Blackwater Park – so that’s the one that stands out for me. Sometimes it’s that first record you hear that becomes your favourite one, you know? And to think of how much amazing stuff they’ve put out since then too!”

“Mikael is an incredible writer with loads of personality and character, as well as a great voice. He’s super talented and doing something really original with his band. And Fredrik is such an awesome guitar player! He has the whole shred thing down but with great feel, vibrato and sound. As a fan, I love that element for sure.”

THEY ARE ALSO TOP LADS

“When you’re on tour together you spend a lot of time together you know, in catering or after the show… so it was really nice that they were so cool. We actually invited the guys to come down to the studios where we were mixing A Dramatic Turn Of Events. Mikael and Fredrik were the only people that heard the early mixes before the record came out. They were sat there with Andy Wallace and myself, and we cranked it to levels beyond the recommended hearing capacity ha ha!”

WE GO WELL TOGETHER MUSICALLY

“I think Opeth fans and Dream Theater fans have a lot in common. Whenever we’ve toured with them it’s felt like a great pairing actually… Such an super-talented and amazing band to watch night after night and as I mentioned before – really cool guys to hang out with.”

Find out more about Opeth in our cover feature from the new issue here.