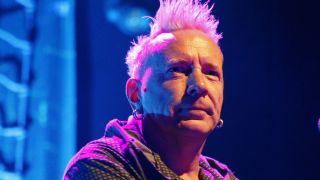 The enduring Metal Box record by Public Image Ltd, originally released in November 1979, is reissued this Friday (October 28), stuffed with a load of rare and previously unreleased material. In reinventing abrasive post-punk to weave in dub grooves and krautrock sounds, it became one of the most influential and revered British albums of its era. Here, one-time Sex Pistol and PiL main man John Lydon explains how it was made…

Not much happened in the band between the first and second albums because we were thoroughly independent people. We couldn’t afford much rehearsal and there were only occasional gigs. With Metal Box, the cover came first, both mentally and physically. We spent most of the advance on it, so making Metal Box presented us with a real challenge because we didn’t have any money left for recording sessions.

Oddly enough, it paid off because although the recordings were done in scrappy little bits, spare hours here and there from the dead of midnight onwards [after the oblivious bands who were actually paying for the block-booked studios had gone home], it actually seemed to help. Through desperation you can get great results.

There were massive fits in the studio – there always is, or there always used to be in them days. PiL was a hard band to keep together because there was terrible friction between [bassist Jah] Wobble and Keith [Levene, guitar]. It was hard to comprehend at times, then there was an inexplicable friction between the drummer and Wobble. All these scenarios kept circling and could have taken away from the project, but being me I managed to somehow focus it. It seems to be my role in life, chief focuser.

We ended up working with a few drummers [David Humphrey, Richard Dudanski, Martin Atkins] due to all manner of problems. Some were full-on disco drummers, others pure reggae and others just rock’n’roll thrashers. It went on and on in this perpetual cycle, but it was alright. For a band that wanted to be drum-based it’s odd we never seemed to focus on securing a permanent drummer.

We mostly recorded in Goldhawk Road [in west London]. Those are the sessions I remember most: running out of ideas and putting ashtrays on the piano strings. I liked the sound of it, close to a harpsichord. I sang underneath the piano with the microphone on top and it created a nice little spacious ambience, things I’d use more later on Flowers Of Romance but that got buried in the mix here.

I wanted it to be a very bass-heavy record and all of the available engineers were telling us “that’s just not possible”. Well, it is, and the record proves it. That’s the story of all our lives really, everyone in music I talk to says the same thing, there’s always an expert telling you that what you want isn’t possible, and then you find out it bloody well is. What they mean is that it’s not possible according to the manual.

I get on much better with tape ops than engineers or producers because they’re willing to take those risks and include those fun elements.

Experimentation was at the heart of Metal Box. It’s just too dull to run through usual formats. You only get one opportunity and there it is, right there in front of you, and you can sound like everybody else if that’s what you require, or you can strive to do better than that. Find out what it is in music that you’re really interested in, and that was my drive.

Some of the songs are instrumentals because we ran out of time. The studio caught onto what we were doing. It became known what we were up to and some of the major bands who were using those facilities were very annoyed. There’d be tell-tale signs like ashtrays all over the place.

I’ve never been interested in chart positions. Some records sell longer and slower than others, some are instant hits, but it’s all irrelevant, what’s important is, are you proud of what you’ve just done? And the answer is yes.