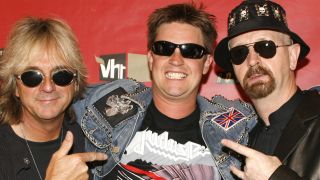 A comedian for over 20 years, and an alumni of NBC’s legendary Saturday Night Live, New Yorker Jim Breuer is arguably best known to metalheads for his excellent The Metal In Me podcast, which mixes classic rock and metal tunes with guest appearances from musician friends. But this month, Breuer releases his own metal album, Songs From The Garage, recorded with his band The Loud & Rowdy, on the legendary Metal Blade label. Produced by Volbeat guitarist Rob Caggiano and featuring a guest appearance from Breuer’s friend, AC/DC frontman Brian Johnson, on two tracks (My Rock ‘n’ Roll Dream and Mr. Rock ‘n’ Roll), it’s a hard-hitting but humorous collection, written from the viewpoint of ‘a dad with three kids who loves family life yet is still a metalhead at heart.’ We spoke to an excited Breuer about the album, which is obviously a labour of love, and his friendship with metal icons in whose footsteps he hopes to follow.

Even given all the great successes you’ve enjoyed in your career, finally putting out your own metal album must be something of a dream come true?

“Honestly, I’ve never been more excited. I’ve had this vision since high school, and I know everyone has that dream, but back then I wanted to be a comedian, and a rock star, touring at the same time: I used to draw my name like the Judas Priest logo. It’s kinda bizarre that here I am now, in my late 40s, finally laying it down and putting it out there.”

What gave you the impetus to finally get around to doing it?

“Well, a lot of it is down to timing: I have a family, and career-wise, comedy took off quickly for me – I started getting TV really early on, and got pushed hard into that world - so it was hard to hold on to the other dream, and find a band, and get the songs that I was writing at 16 or 17 out of my head. Years ago I toured with a band doing stand up comedy, they would score my stories and we’d do Metallica and AC/DC and Judas Priest doing goofy songs, but I have to say, being friends with those guys they’d always say ‘Why don’t you just try to do one album, you’ve got the vocal chords, just go for it.’ But to be honest with you, I was petrified. Because who’s going to accept that a guy who does comedy for a living is really going to start a band now, and be good?”

I imagine that too that as much as your musician friends might be encouraging, the knowledge that, say, James Hetfield and Brian Johnson would be listening to your album could be rather daunting… Like, no pressure…

“That’s right, exactly! Here’s a thing you don’t expect…[adopts pitch-perfect Brian Johnson accent] ‘Jimmy, my son, I want to be on your record.’ I said ‘Brian, I’m going to take you up on that’ and he said ‘No, I’m dead serious.’ When he recorded the song with me I was like ‘Brian, let me get all your info, and your ASCAP info, and I want to make sure you approve it’ and he said ‘Nah, listen to me my son, I trust you, 100%’. When we finished the song and got it mixed I said ‘Brian, I’ll send you this for a listen’ and he said ‘I don’t need to, I trust you that it’s gonna be good.’ And <> was a lot of pressure. Because then not only do I have to make sure that song is amazing to justify him being on it, but I have to make sure that the rest of the album is powerful so that he’s not on this piece of garbage. But I can honestly say that I think we pulled it off. I’m very happy with what we did, I can’t wait to tour it, and I’m ready to do another one.”

Where did your friendships with your rock star buddies begin? How did you first come into contact with Metallica, for instance?

“Saturday Night Live. Lars Ulrich came to a show one night, and he was by himself, and I saw him walking down the hall and I was dumbfounded because no-one was looking after him, or paying any attention to him at all. I said ‘Lars, what are you doing?’ and he said [in uncanny Lars Ulrich accent] ‘Hey dude, I came to check out this band, I really like these guys’ and I said ‘No-one is taking care of you? Come to my dressing room.’ So me and him started talking, and he said ‘When I come back from tour I’ll give you a call’ and I didn’t believe him, but he called, and then we started hanging out. With the Metallica guys we all had so much in common. And then I had a radio show and Rob Halford would come on all the time, which was amazing to me, as I’m such a big Priest fan. I’m such a geek for hard rock and metal that I feel more comfortable in that world than almost anywhere else.”

Your story about a night out with Lars in New York is hilarious. When you first told that story to Howard Stern you mentioned that you’d kinda drifted in your friendship, so did that story going public re-build any bridges?

“Well, I had stayed friends with James [Hetfield] the whole time, and I told that story because I knew Lars would hear it, because he’d stopped returning my calls. We didn’t fall out, he just started hanging with a different crew, and then I remember he went on Howard’s show once and said ‘I was friends with Jim, but he left me for James’ and I was like ‘What? Were we dating?’ But yeah, that was the last night out he hung out with me, and he was genuinely upset that I was going home. I was like ‘Lars, my wife is pregnant!’ and he was like ‘But dude, come on, we’re hanging out!’ But yeah, I saw him a couple of times after that, and we started hanging out again. I love him, he’s so funny.”

So you’ve got Brian Johnson singing on two songs on Songs From The Garage, but did you deliberately decide not to ask other rock star friends to contribute in case it started to seem like it was just a project you were undertaking for a laugh?

“That’s exactly what it was. I was going to try to ask [Rob] Halford and [James] Hetfield and then I thought ‘You know, this is my first project, I plan on doing more, and I don’t want to put them in a place where they have to stick their neck out for me: let me prove myself first.’ Brian came to me, and that’s the only reason I used him. For future endeavours? Sure, I might ask. I’d love to do stuff with Halford – God I’d love to do stuff with Halford!”

Your comedy career is obviously very successful, so how much time are you going to be able to devote to this?

“To be honest with you I plan on spending most of next year on this, starting from this winter. If I can tour this for the next couple of years I’ll leave everything else to do it. I have a whole theatrical stage plan set up for this, basically set around the idea that here’s this family guy who grew up on ‘80s metal and I have an hour and a half while my wife and kids are away to do my thing. It’ll start with me waking up and there’s nobody home and there’s a note saying ‘You’ve got 90 minutes, be productive!’ and then I’ll walk into my garage and the band is there, and we’ll get into it. I’m not going to wear leather pants, it’ll be me as I am, in my gym shorts or sweatpants, but I intend to mix up comedy and stories with the music, and I’m so psyched for people to see this, because I think I’m going to blow people’s minds.”

And this is something you’d ideally take around the world?

“I really hope so: I hope people will hear the album, embrace it with open arms and demand to see it live. It’s kinda aimed at family people who need a time out and want to bang their heads and enjoy themselves: people like myself really, and God knows there’s enough out of us out there!”

Jim Breuer and the Loud & Rowdy’s debut album Songs From The Garage is out on May 27 on Metal Blade.

More on Jim Breuer in the TeamRock archive…

Why Brian Johnson deserves better, by his friend Jim Breuer

The 11 most metal comedians