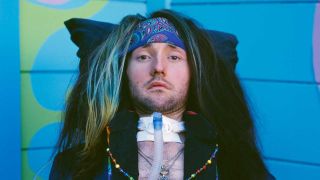 Any struggling musician in search of inspiration would do well to consider Jason Becker. At 20 he was poised to become a huge rock star, having joined David Lee Roth’s band and wowed audiences with his dazzling metal/neo-classical virtuosity.

Then, quite suddenly, he developed amyotrophic lateral sclerosis (ALS), which left him unable to play the guitar, walk, talk, or breathe independently. Yet he has continued to make music, communicating and creating with painstaking eye-movements.

Triumphant Hearts is a really eclectic record. What were your starting points when it came to writing it?

My starting points were always to write what I was feeling. I think more along the lines of wanting to tell my story to music, or wanting to make a funky kind of song to honour Prince and use a solo I never used but really liked, or I want to build another type of feeling in a song and use my favourite guitar solo of mine, or I want to compose music that feels like the desert vacations and spaghetti westerns I love.

And since I have always loved classical music and have always incorporated it into the music I was playing or writing, I want to include some classical tunes and I want them all to have feeling and soul and substance.

How long, on average, does it take you to compose a song?

It is different for every song. I worked on Hold On To Love for many months. Actually, it started with the intro solo, which I wrote in the nineties, so that took twenty years! I was new to lyrics, and it was very personal and I wanted it to really convey my story, what I think and how I think I can (mostly) remain sane. Maybe two years before it was ready for a play-through, because it took a long time to find the right singer.

Triumphant Heart took about a month to write and sound good, but it took a lot more time to record all of the musicians. We Are One took a couple of years too, but to compose, it took a few months. Alongside the soaring, classically rooted elements, there’s a lot of rocking out there.

Which rock guitarists that you listen to the most?

These days I love Aleks Sever, and all of my old favourites, like Van Halen, Led Zeppelin, Yes, Pink Floyd, Stevie Ray Vaughan, Jimi Hendrix, Jeff Beck, AC/DC, The Beatles and The Band.

You assembled an impressive list of guest players for your record. Did they record their parts in the studio with you, or separately?

They recorded their parts on their own, either at a studio or their home. I did have a visit from Uli before he started Magic Woman, and he talked about how he wanted to play it, mostly just as it was. And the sound is always important to him, so I hope he approves of the final result.

It is exciting to receive these solos from the best players, and yes, it is stressful to edit them. I always want to do them justice, and between me and my co-producer, Dan, I hope we did that.

Songs like Hold On To Love are deeply personal. Did it feel weird entrusting that kind of material to other singers and guitarists?

Yes, but mostly it was weird when I was thinking about who might do what [the singing and guitar playing] before I had decided, or heard singers, etcetera. Once I knew who was going to sing and play, and I had heard all of them and thought they were right, it was easy to trust them. I knew they had the skills, and I could hear the heart. After that it’s just a matter of making the music work to move other people. I think they all did a wonderful job.

Do you get to check out much new music these days?

Not so much, especially since I have been working so long [about six years] and so hard on my album and I have only a few hours of ‘working’ time during my day. ALS takes a lot of time and energy.

At this point you’ve spent more of your life with ALS than without it. How is your relationship with the condition today?

I am okay with it. I still get frustrated sometimes, and tired of all that I have to go through. I don’t enjoy trips to the hospital, scary bouts of feeling like I can’t breathe well enough, being nervous about having a fever, stomach aches, etc. But, I can still make music and I am at home with people I love.

Maybe that I am always positive and happy, no matter what. I am generally a positive and happy person, but I can get pretty dark and down as well. I understand thinking negatively and I have to talk myself out of it sometimes. When other people try to bring me back to the positive side, sometimes it works and sometimes it doesn’t.

That’s why I am not always so sure about giving advice, or trying to comfort others myself. I can only say what I find to be true when I do think positively, but I understand if a person chooses not to see that at certain times in their own lives. And I don’t feel like the authority on what folks should think or feel. It’s different with everyone.

The therapeutic power of music, and the support of your loved ones, have obviously been crucial. What else has helped you the most?

That is a good question. Lately I am not quite sure. I would like to think that the grace of God, and the love of Amma [a Hindu spiritual leader and guru] helps. My pets make me happy [Jason has two cats].

Your dad has said that you don’t want to be “a poster boy for ALS”. What do you want your legacy to be?

Well, I think what my dad meant by that was that I wanted to be known for my music and not for having ALS. Which is true. I guess if I was known for my work, like Stephen Hawking was, I wouldn’t mind being a kind of poster boy if it would bring helpful attention to ALS. I would welcome it. For my legacy, I don’t really think about that. I guess that I was a nice guy. Ha ha!