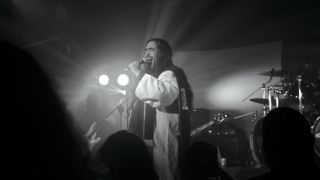 The steady expansion of heavy music into virtually every corner of the globe is a resounding success for our world, but there is still something startling about the revelation that there is a flourishing metal scene emerging in the Caribbean.

Thanks to the efforts of metalhead academic Professor Nelson Varas-Díaz and his cohorts, the world is about to learn about this most unique of breeding grounds for massive riffs. The team’s new documentary, Metal Islands, tells the story of how metal reached this part of the world, specifically in the three distinct Caribbean territories of Cuba, Puerto Rico and the Dominican Republic. As with comparable scenes in Asia, the story of metal’s triumph in Nelson’s neck of the woods runs in parallel with changes and conflicts in the development of Caribbean society: heavy music, born through struggle but imbued with a strong sense of community and self-belief.

“In terms of the Caribbean itself, a lot of these bands and musicians feel isolated in their own communities,” Nelson tells us. “If you’re a young man and you have a limited amount of concerts to attend, you grow up thinking that these small homegrown scenes are too small and bad, but if you look from an international perspective, you can see that those scenes are very important and really, really active. So we wanted to have people from the three different islands understand where they each came from, but also what they all have in common, so it will continue to foster and develop a story that brings them all together. If we can do research and bring people together, I don’t think you can ask anything more.”

Metal Islands is a fascinating film for numerous reasons, but perhaps the most striking thing about the documentary is how metalheads in the three territories overcame social prejudice and suspicion to somehow establish heavy music as a legitimate and viable cultural contribution. Each of the three scenes’ upward trajectory seems to have hinged on the efforts of inspirational individuals, not least in Cuba, where the entire metal scene grew from a venue known as Maria’s Patio, and the benevolent, enlightened and gently rebellious patronage of its owner, Maria Gattorno.

“Maria is an incredible person,” Nelson agrees. “If you notice, the documentary is actually led by females. Female voices are the driving force in the documentary, and that was surprising because I was expecting to speak with a lot of metal musicians and they’re mostly males, as is the case in a lot of places in the world. But when you get to Cuba and you speak to Professor Liliana González Moreno who’s doing research on metal music, and then you start talking to Maria and she’s the mother of metal in Cuba… there’s this very strong female presence in the Cuban metal scene. They’ve nurtured that scene from the ground up, and they continue to do so today.”

Maria had a job in a ‘cultural house’ during the 1980s, helping to organise activities for people in the area. She remembers struggling to plan events that were exciting for people.

“One day a frenzied group of youth showed up, saying they played rock music and were practising in a park,” she says. “Of course, those practice sessions always ended in brawls because the neighbours could not understand the sound. They wanted me to give them a space to practise at the cultural house. That’s how it all started. I was amazed and it felt like a window being opened – something that needed to be helped. That night the place was extraordinarily full. It was a mass of youth that came out of nowhere. That is when I realised there was an underground movement – literally! I proposed creating a space in my programming schedule to include rock. They brazenly laughed directly in my face. They told me that a rock concert in the city could cost you your life. I said, ‘Why not give it a shot?’”

The venue was in a disadvantaged area. At the first concert, traditional salsa devotees from the neighbourhood showed up with machetes to defend their space, and there was a huge brawl. Maria was depressed and didn’t get out of bed for two days. “They reacted like white blood cells towards a virus in the bloodstream,” she remembers. “But the next Saturday we did it again, and it worked.”

Arguably more so than in Puerto Rico and the Dominican Republic, the very existence of a metal scene in Cuba seems implausible. Fidel Castro’s post-revolutionary society imposed stringent limitations on what can and can’t be accepted as legitimate Cuban culture. Throw in the widespread absence of internet access and, for much of the last few decades, firm restrictions on travelling to and from the island, and the blossoming of Cuban’s metal scene seems like a miracle. But as Metal Islands shows, the fractious, frequently thwarted efforts of fledgling bands in the 80s created ripples that have since transformed the musical landscape in Cuba. The island’s most successful metal band, Tendencia, are living proof that things have changed for the better.

“Cuba has made great strides,” says guitarist Sergio Ernesto Puente. “The Cuban government has created music companies where Cuba’s most recognised groups are part of its catalogue and are supported. Although rock is still the last link in the chain of Cuban culture, we’ve won prestige and are recognised as musicians. There is a programme on TV, Cuerda Viva, where they show rock and extreme metal bands from the island. Also, there are around 10 rock festivals which are sponsored by the Hermanos Saiz Association, which brings together the best of young art from all over the island. Some of them are already taking on an international character.”

“Tendencia have travelled all over the world,” adds Nelson. “They’ve been to Europe several times, to Latin America. It’s interesting that people perceive Cuba as this place you can’t travel in or out of, and yet Tendencia have done it many times. They’re the most internationally known band from the Caribbean, I think.”

In stark contrast to Cuba’s unexpected evolution as a metal territory, the Dominican Republic has seldom been supportive of its native metal bands. As Metal Islands explains, the nascent scene of the 80s was continually and purposefully assailed by mainstream media outlets in the country, with metal fans and musicians being routinely vilified as Devil-worshipping junkies and criminals. Things have certainly improved for stoic, veteran bands like Abaddon RD, but as frontman Maik explains, the struggle to be accepted by society is ongoing.

“I guess it’s still the same these days, but not with the same intensity,” he says. “We’re always looked at, pointed at. People still don’t really understand what the metal brotherhood is. Back in the 80s, you could keep track of bands, even though vinyl was hard to come by. You had to ask somebody who was travelling overseas to get records for you. But then came the accusations from the media and the police getting on your back for the way you dressed, wanting to take you to the police station on some stupid charge. Nowadays it’s changed to some degree: at least you get to play in bars now, which was not allowed by the bar owners back then.”

Understandably, given its bonds with the US and the cultural influence that relationship has long exerted, Puerto Rico has the biggest, most internationally recognised of the three scenes spotlighted in Metal Islands, with numerous bands now releasing albums and performing in the US and elsewhere. But despite slightly more relaxed mainstream views of their music and culture, Puerto Rican metalheads have still had to build their scene from the ground up, defying expectations and the prejudices of more conservative elements in society.

“We don’t have a cultural tradition of rock like in Argentina or Spain,” explains Eric Morales, frontman with doom metallers Dantesco. “We grew up with more traditional music. There was rock, but on a small scale. With MTV, it became a trend to be a metalhead and there were a lot of bands and we made a scene. Still, it’s always been criticised and seen as a bad thing here. We all know the stories of Satanism and suicide in the media. But there is not a real struggle if you want to make music and enjoy it. If you do want to do it, you do it! The only issue is being on an island, so you need to fly everywhere. It is the only stone in the path to getting more recognition, but the secret is to work hard and not wait for anyone to do things for you.”

A celebration of the power of heavy music and its importance to the lives of its participants, Metal Islands is essential viewing for anyone with a genuine interest in heavy metal culture. The very good news is that Nelson and his team are giving the movie away for free: simply visit www.facebook.com/themetalislands and send a message confirming your interest, and the DVD (which also includes two CDs full of tracks by bands from Cuba, Puerto Rico and the Dominican Republic) will be sent your way, wherever you are in the world. It’s an altruistic and subtly political gesture that speaks volumes about Nelson’s motives and the depth and diversity of metal in the Caribbean.

“We wanted to bridge the gap between academia and metal fans,” Nelson concludes. “When scholars publish papers in journals and books, I think that’s great, but most people don’t have access to those. What we’re trying to do is have a deep, scholarly discussion, but have it visually in the documentary and then give it away for free. Florida International University in Miami is paying for the shipping, so it’s completely free to whoever asks for it! The beauty of it is that we can reach people in different countries and different continents, and then they can discuss it online. Some of the discussion is great, some of it’s horrible, but it’s a discussion, and that helps to keep metal alive in the Caribbean.”

For more information and to request your free DVD, see www.facebook.com/themetalislands

Your guide to the bands making noise in the Caribbean

The idea of a doom metal band amid the sun-kissed climates of the Caribbean may seem ridiculous, but Dantesco are absolutely the real deal. Their grandiose, melodic doom has a very European flavour, but imbued with a strong sense of Puerto Rican heritage.

These veteran diehards have done more than anyone to keep the Dominican Republic scene alive, and judging by 2015’s Tragic Eternal Mutation album, their snarling thrash attack is as raw and vital as it gets.

Listen to: Hungry For The Kill

Young, snotty and fervently in love with old-school thrash, Calamity are the thunderous embodiment of Puerto Rico’s next generation of metal bands. Subtly sophisticated but always at full tilt, their huge potential is self-evident.

Bombastic, state-of- the-art metalcore with a shitload of Caribbean groove. The band’s self-released 2016 debut, V1SC3R4L, is full of killer moments. Proof that the Cuban scene is more than ready to take on the whole world.

All hope is strong: How heavy metal is helping to unite communities in Africa