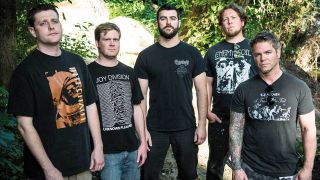 In that time, the world has started to enthusiastically circle the plughole, which probably means that a fresh dose of warped savagery from one of the extreme metal world’s most idiosyncratic bands would be very welcome. Currently piecing the new record together at guitarist and founder member Scott Hull’s Visceral Sound Studios studio in Bethesda, Maryland, electronics maestro Blake Harrison tells Hammer that fans should expect a surprise or two.

So what’s changed since Book Burner?

Blake: “This is the first album we have ever made with a bass player and so that means we have a new toy to play around with. Having that extra element, those lower tones, means that the whole sonic picture is different, so we’ve been exploring that. Having John [Jarvis, bassist] really opened things up for us. We can incorporate much more stuff and really experiment on this record.”

Pretty much everyone claims that their new albums are faster, heavier and darker than previous ones. Need we even ask?

“Yeah, all of the above! Ha ha ha ha! Faster and heavier? That’s probably true, but I would just say that this one is a little more diverse than before. [2001’s] Prowler In The Yard was more of a death metal record, Terrifyer [2004] was more of a noise rock record, Book Burner was a grindcore record and Phantom Limb [2007] was more of a thrash record, but this one has all of those things in it. Some songs have a more Melvins vibe and obviously there are some straight-up, 30-second, fast-as-hell grindcore songs.”

JR Hayes is famous for his twisted lyrics. Any clues as to what he will be singing about this time around?

“Well, I see bits and pieces but I like to wait until he’s finished writing and has his vocals all worked out before I go deep into it. I trust him to come up with something unique. His vocals are so important and I have to fit a lot of my stuff around whatever JR is doing. You don’t want crazy noises going off all the time when he’s screaming. He’s so imaginative in what he does, though. It makes it exciting for the rest of us. I guess these are dark times for the world in lots of ways, so it would be weird if that didn’t have some influence on the record.”

How do you explain the long gap between albums?

“Doing this stuff takes time because we all have jobs and people have wives and kids, but it’s starting to take shape now and we’re all real excited about it. We just want to do something special every time but we all have other projects that take up our time. I think this record might lead to a few more live shows than usual, but who knows? We’ll do whatever we can, whenever we can do it!”

Are you excited about playing this new material live?

“That’s what it’s all about for us. We’ve had good offers to play Prowler In The Yard in its entirety, but we don’t want to do it because it doesn’t feel like moving forward with this band. We’re much more excited about going out and playing this new shit. Pig Destroyer is definitely a different animal now. The only downside so far is that we tend to play in pretty small places, so the stage is pretty crowded now!”

This grindcore grandmother is more metal than you