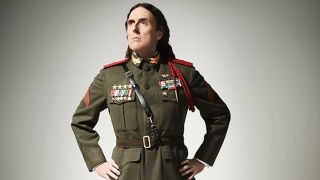 When it comes to pastiches and parodies, Weird Al Yankovic is the undisputed king. Plenty of other artists have mimicked styles and poked fun at popular songs over the years, but none have equalled Weird Al for out-and-out quality and hilarity. His new album Mandatory Fun saw the parodist take on the pop stars of today like Pharrell, Robin Thicke and Lorde, as well as established rock acts like Foo Fighters and Pixies, and upon release it went to number one in the US.

You might not realise it, but Weird Al has spent the last four decades mimicking the biggest acts in rock, hip-hop and pop - save for Prince who’s the only one to repeatedly refuse Yankovic’s requests for approval. And he’s succeeded not only in perfecting every artist, song and genre he’s chosen to imitate, but also in satirising pop culture and social trends over generations. And he continues to expose their absurdities in fresh and funny ways.

Besides possessing an unparalleled ability to write relevant parody songs that capture the zeitgeist, the other contributing factor to Weird Al’s long-lasting success is his understanding of the importance of multimedia and the deployment of entertaining music videos. To mark the release of Mandatory Fun he put out eight in eight days - a strategy that undoubtedly drew lots of attention to the release of the record and helped catapult it to the top of the charts. To celebrate the reaffirmation of the master of art form, here’s a retrospective look back at eight of the best Weird Al parodies from previous releases…

Taken from his eponymous debut album, Weird Al’s parody of Joan Jett’s cover of I Love Rock N Roll is short, sharp and simple, just like the song it mimics. It documents the comedic plight of an ice-cream junkie and features an accordion solo from a leather clad Weird Al. What’s not to like? Well, Rocky Road ice cream apparently – Weird Al ended up eating so much of the stuff during the promotional campaign for the song, he’s said he’d quite happily never taste that particular flavour of ice cream ever again. There’s a lesson in there somewhere.

The title track of Weird Al’s third album is basically an amalgamation of every Devo song ever written, whilst the music video references several of the band’s songs, including Jocko Homo, Freedom of Choice, Come Back Jonee, Whip It, and most notably the band’s cover of (I Can’t Get No) Satisfaction by The Rolling Stones. And Devo bloody loved it. In fact, Mark Mothersbaugh once called the song the most “beautiful thing” he’d ever heard. We can’t tell if he was being serious or not.

On album number seven Weird Al went it alone, choosing to self-produce for the first time after completing six records with Rick Derringer at the helm. The record was met with critical praise and re-introduced the king of parody to a whole new audience that came of age during the grunge era. This song is notable for being the first Weird Al parody to directly lampoon the original artist, which is something he doesn’t do very often - the lyrics ridicule Kurt Cobain’s incomprehensible vocals and Nirvana’s roots as an anti-establishment garage band. Don’t hate on Weird Al for mocking Nirvana though. Cobain considered the parody a sign that they’d “made it”, and he viewed Weird Al himself as a “pop-rock genius”. So there.

You Don’t Love Me Anymore was the second single from Weird Al’s platinum selling album Off The Deep End, and his first original composition to receive significant airplay. He had to fight the record company over its release, since they had reservations about making a non-parody track a single, but he won out on condition that the music video take on the form of a parody. Fortunately he didn’t have to think too long and hard about where to turn, since Extreme had just put out that stomach churning video to More Than Words. All Weird Al had to do was turn the cringe factor up a bit, throw Robert Goulet of Naked Gun fame and some slapstick humour into the mix, and take the death by power ballad theme to its logical conclusion - that ending still cracks me up every time.

Aware there was a new Flinstones movie on the horizon, Weird Al wished to buck the trend and precede the phenomenon rather than wait and respond to it, so he set about writing his own comedic anthem to the caveman cartoon. Inspiration came from LA funk rockers Red Hot Chili Peppers and their music video to Give It Away, in which the band more than somewhat resemble the Stone Age characters found in the fictional town of Bedrock. It was an inspired transposition of components, and a fitting tribute to an institution of popular culture. Throw in the intro to Under The Bridge and a cameo from the Bee Girl from Blind Melon’s No Rain video, and you’ve got perhaps the definitive homage to ‘90s alternative rock too. Yabba Dabba Do!

The Presidents of the USA were such a catchy and funny band anyway, the transformation of their hit Lump into a song all about Forrest Gump can’t have been much a stretch. And the protagonist’s surname just so happens to rhyme with the main refrain in original song. It was meant to be. Still, condensing the entire plot of a two hour movie down into a two and a half minute song is no small achievement, and Weird Al makes it seem simple. That’s why the man’s a genius. “And that’s all I have to say about that.”

The Saga Begins (Running With Scissors, 1999)

Much like the greatest cover songs, the best parodies are the ones that surpass the original song that it’s based on. Now I’m not saying The Saga Begins is better than Don McLean’s American Pie as such, but it is impossible to hear that outstanding rock standard anymore without Weird Al’s lyrics creeping up on you. No matter how much you might cherish the original, once you’ve heard this parody there’s no going back, such is its brilliance. Even the guy who wrote it has that problem. That’s right – Don McLean’s kids have played him Weird Al’s version so many times he often accidentally starts singing about Star Wars when performing American Pie live. Now that’s something we’d pay to see.

The last song on our list is another style parody, and features Weird Al waxing lyrical about the advertising website Craigslist in the style of Jim Morrison, over an amalgamation of recognisable tracks by The Doors. There’s traces of When The Music’s Over, Light My Fire and The End amongst others, and Weird Al manages to replicate the band’s distinctive sound almost exactly thanks to help of one Ray Manzarek, who was enlisted to play keys on this mock rock classic. Jim Morrison would undoubtedly be turning in his grave at the very concept, but the juxtaposition of the uncanny likeness to the source material and the hilarious surrealism of the lyrics is too delightful to deny.

And that brings things pretty much up to date. Special mentions have to go to Eat It, White And Nerdy and Amish Paradise, which although aren’t based on rock songs, are undoubtedly Weird Al’s finest compositions. And if you want hear what he has to say about today’s Facebook, Twitter and reality TV obsessed society then check out Mandatory Fun. Incidentally, the success of lead single Tacky made Weird Al the third artist ever (the first two being Michael Jackson and Madonna) to achieve Top 40 hits over four decades, and at the age of 54 he shows no signs of slowing down.