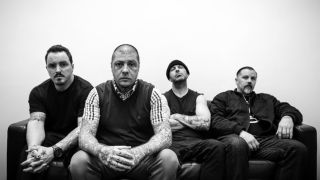 The revelation that Rancid are returning with their first album in five years is excellent news for punk rock fans. Even better, they've elected to accompany this announcement with the release of a video taster showcasing three brand new songs – Collision Course, Evil's My Friend and the album's title track, Honor Is All We Know – each of which suggests that the long wait for the follow-up to 2009's Let The Dominos Fall is going to be well worth it. But then when have Rancid ever let us down?

The Berkeley quartet have one of the strongest discographies in punk rock, a catalogue that can stand toe-to-toe with any punk band you care to mention. Often mocked in the UK, where the cultural gatekeepers refuse to acknowledge the validity of any punk rock post-London Calling, as if the entire movement has been frozen in time since Joe Strummer warned of that impending ice age, Tim Armstrong’s band might not have the global album sales of their old Gilman Street buddies Green Day, the unimpeachable credibility of Fugazi, or the socio-political smarts of their Epitaph labelmates Bad Religion, but their gritty gutter-punk has a soul, heart and integrity few can match.

For those not wholly in sync with the punk rock underground, Rancid first garnered international attention when it was reported that Madonna had attempted to lure the band to her record label Maverick, in the wake of the phenomenal success of The Offspring’s Smash and Green Day’s Dookie, by inundating the band with nude photographs of herself. Undoubtedly a novel and unorthodox approach for a record mogul, the Material Girl’s entreaties ultimately proved fruitless, though her desperation – sorry, enthusiasm – became more understandable when the quartet dropped their third full-length album, …And Out Come The Wolves, in the summer of 1995. With a cover knowingly referencing the artwork of Minor Threat’s debut EP, three solid gold radio singles – Roots Radicals, Ruby Soho and Time Bomb – and a fistful of gnarled underdog anthems, the 19-track collection was an instant classic which passed the half-million sales mark in the US before Christmas. For its follow-up, the equally excellent 1998’s Life Won’t Wait, the East Bay bruisers took their cues from Sandinista!, broadening their sonic palatte to incorporate dub reggae, funk and hip-hop, while addressing questions of injustice, police brutality, ethnic cleansing and gang violence: the quartet tracked some 50 songs for the record in recording sessions that took in trips to studios in New Orleans, New York, Los Angeles and Kingston, Jamaica. Having thus purged themselves, they then pared things back with the vicious and wilfully monochromatic Rancid, a snub-nosed collection which re-wired the frenetic, furious sound of classic US hardcore for the new millennium.

Fourteen years and just two albums down the line – Tim Armstrong having taken time out to record solo albums and co-write pop hits with the likes of Pink and Gwen Stefani - Rancid appear to have their appetite for righteous punk rock fury restored. Myopic critics will doubtless take one look at their studded leather jackets, number one crops and DM boots and sneer at what they perceive as redundant postcard punk revivalism, but in moshpits from Blackpool to Berkeley three generations of punk fans will be singing too loudly to hear their complaints.

Rancid’s eighth album Honor Is All we Know will be released via Hellcat/Epitaph on October 27.