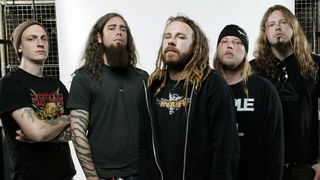 In Flames (Anders in the centre) (Image credit: Getty)

Having formed in Gothenburg, Sweden in 1990, In Flames went on to become one of the leading lights in the nascent melodic death metal scene. Since then, they’ve evolved their sound to embrace a more alternative metal approach, reeling in an ever-growing audience in the process.

“Music is a huge part of my life and my character. I always had it around me, all the time. It was around when I studied, it’s my first love and obviously it wasn’t just about being a spectator, I wanted to be part of it too. So me and a bunch of friends formed bands… and the rest is history. I’m still surrounded by it, it’s a way for me back home to escape, it’s something that picks me up and I’m fascinated by how you put tones next to each other and how that forms something interesting. I could be really nerdy about it and build songs that the band would think were garbage but which I would hear the beauty in. Back home I work a lot with modular synths and old school synths, just for fun. For some people that’s just blips and blops but I find the beauty in it.”

“Well, I was about to say music is everything before, but I realised that its second place, after family. As soon as you get kids you get a new perspective and realise everything else is secondary… it’s not about you any more. It affected my worldview and if it doesn’t for other people, I don’t get it. My mum and dad are still married, I have a brother and we all have a good connection – I don’t have to talk to them every day, they know that I love them and I know they love me. We don’t have to remind each other, we’re always there if something happens. So it was a big part of my life before, but everything changes when you get kids. You realise that you’re not immortal.”

“Business? That’s fun. I take part in many businesses, not just music. With In Flames it’s something that just happened, because that’s not why we got into this. It’s something that becomes necessary… In Flames is something we have to take care of, it would be irresponsible to do otherwise because we have responsible for others as well. Not only family, but people we work with, so it has to be business and if we don’t care of it, the big brother government will say, ‘Where’s our money?!’ and we’ll go to jail [laughs]. So we better respect that.”

“We are involved with alcohol in many ways! [Laughs] I love making beer. It’s not a big business, it’s just something I do because I’m really interested in it. And we are also doing a whisky, we’ve done that before with the Scottish distillery Glenfarclas, but now we are working with a Swedish distillery called Box. It is way younger and Swedish rather than Scottish. Sweden is a young whisky-making country – we used to have some crappy ones here in the past, they tasted like gasoline and you could run your car on them.”

“It’s a powerful force and I realise it helps some people, but it’s also devastating to other people. I get if people want to have that for times of need, if they need something comforting, but don’t hide behind that and use religion in a bad way or to justify things. I don’t have any religious beliefs. When my grandfather died I saw that my mother became more religious and used that as a comforting thing. That’s a good thing, but I’m not really into it. Who knows, maybe there’ll be one day when I feel horrible and in need of a prayer, but I don’t believe in that fairy tale.”

“I don’t feel like one. The only time we think of it is when we play a show and we always go into the pub next door and that’s when people come up and want to talk and shake hands. I don’t think any of us ever had a problem with it. There’s no worries if someone wants to come up and talk. I don’t think any of us have ever thought, ‘Oh I’m the greatest in the world’ or used that, ‘Don’t you know who I am?‘. Actually… I did use that once. This is a confession, I did that once. Kiss were playing in Sweden and I heard on the grapevine that they wouldn’t let in kids younger than 13. I feel a father and his son should go to a Kiss concert, kind of to pass the torch. So this was super-important. And I walked up and they said, ‘Nope’, so I thought, ‘Okay, I have to play this card, I don’t care if it sounds stupid’, because it was that important. So I said, ‘Can you get your manager, my name is Anders from In Flames and I really, really want to get my son here, so can you get us into VIP?’ And they did. I wouldn’t use that again. Or maybe I would. For him.”

“I love playing the shows, I love meeting the fans. That’s why I’m there. But sometimes I would like to have a teleporter to go back to my own little world, my own shithouse, my own shower, my family. I’m a studio guy, I love being in the studio creating stuff. But it’s not like I’m complaining, cos on tour we have a lot of fun and we hang out and we check out different bars and new places, so definitely I love touring. It’s easier now because you’re closer to your family with FaceTime. You’re always online and you can call everywhere, you don’t have to buy a phone card, scratch a number and then queue up to call for five minutes. In the early days we’d be in America at a truck stop, with everyone queuing for the phone, handing over the phone saying, ‘I didn’t have time to say everything’ – it was like a prison!”

The Death Metal Quiz: how well do you know your death metal?