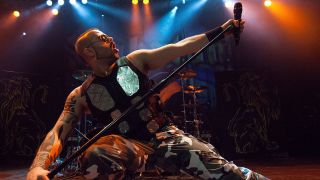 We’re guessing you played with toy soldiers when you were a kid?

“Of course I did – who didn’t? I wasn’t that serious about it, I didn’t line them up into proper battle positions. It was more like whichever soldiers I had lying around would end up fighting each other!”

If you had to pick a favourite war, which would you go for?

“It sounds very sick, but I’d have to say World War II because it had everything. It was also fairly safe from a political point of view, there’s not much debate about whether the right side won! Plus it was so recent, some people who experienced it are still alive and eyewitness accounts make it much easier to find actual facts.”

All your songs are about the past. Do you ever think about the future?

“Actually, yes. We had some ideas about doing a Mad Max kinda album, after a disaster or maybe as World War III is happening. We’d want to get a really good author to write the WWIII story for us and make it believable. The only thing is we’re kinda picky and it would have to be someone like Tom Clancy, and he probably wouldn’t care much for us. Even if he did, I doubt we could afford him.”

Do people get the wrong end of the stick in terms of the band’s message?

“Yes! We tell people to read our lyrics and see how we tell stories from different perspectives – we’re not celebrating political or religious point of views. People often connect music to a political stance, but if Spielberg was to make a Holocaust film, no one would accuse him of being a Nazi! We just want to tell a different story; there are enough bands who sing about slaying dragons, drinking beer and fucking women. Though there’s nothing wrong with drinking beer and fucking women. Slaying dragons I don’t know about.”

Do you ever take your shades off?

“Yes, usually on the last song of the show. Especially if there’s a kid in the front who I suspect might be enjoying their first metal gig. I try to give them my shades as a souvenir. I’m endorsed by a Swedish eyewear brand – whenever I run out, they send me another 300 pairs ha ha!”

What’s the worst thing you’ve read about your band?

“Probably that we’re a bunch of Nazis! Some people assume because we have the word ‘Nazi’ on an album, we must be Nazis. How logical! Whenever it comes up in an interview, I always think ‘Not this again!’ It’s usually outside of the metal community, though; it’s the mainstream press who don’t understand us and seem to just be looking for their headlines. I always have to watch what I say, so they can’t take anything out of context.”

What’s been your most memorable groupie experience to date?

“Well, there aren’t many groupie stories for us these days! There was one tour when we were sharing our bus with another band and their crew. I woke up on the bus in the middle of the night and found a random girl with three guys right in front of me. The only thing they were wearing were my shades and giant sombreros. And each other, of course.”

“I’ve never been high, to be honest. I tried the weed in Amsterdam once but it wasn’t for me. I didn’t get high from it, I just felt unwell and went back to bed for 10 fucking hours. Alcohol, on the other hand, I’ve definitely had a lot of experiences with!”

“Nothing irrational, but I don’t like spiders. I guess I have arachnophobia and that comes from being bitten by a spider when I was in the zoo as a teenager. I’ll run away even if there are spiders on the TV screen!”

“In 2008 I met a soldier called Sterling Cale at Pearl Harbor. I got his autograph. I meet musicians everywhere all the time so I know what their lives are like. But what these guys have been through is much tougher.”

Have you ever had any major onstage disasters?

“Every few months my stage trousers rip near the crotch. That’s not a problem at all though; I just call it penile air conditioning and move on! Ha ha! One time we were playing in Spain and I had salmonella, which meant running to the toilet during the guitar solos!”

The 10 best Sabaton songs released before 2008