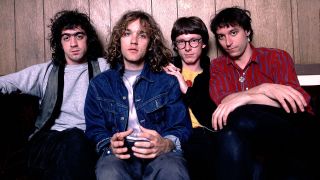 When R.E.M. made their 1980 stage debut at St Mary’s Episcopal Church, Athens, Georgia, there can’t have been many in the threadbare audience with the foresight to realise they were in the presence of greatness. By the same token, spin forward three decades and those who have only heard the band’s patchy post-millennial output might find their hallowed reputation hard to fathom.

The magic happens in the middle. When R.E.M. hit their stride – between 1983’s spellbinding Murmur and 1996’s undervalued New Adventures In Hi-Fi – nobody was making mainstream music of such intelligence and depth.

In 1980, R.E.M. were alternative rock before the term was coined, and one of a handful of American bands whose stagecraft wasn’t lifted from the past masters. Hanging off the microphone stand, mumbling lyrics so esoteric that even his bandmates claimed not to know “what the fuck he’s singing about” was former photography student Michael Stipe. Flanking him was ex-record shop clerk Peter Buck, whose chiming Rickenbacker was perhaps the group’s most traditional ingredient, alongside bookish bassist Mike Mills (“the nerdiest of all nerds,” Stipe recalled of their first meeting) and no-nonsense drummer Bill Berry (recruited, according to legend, because Stipe liked his eyebrows).

R.E.M. seemed destined for cult status as the band pounded the US college rock circuit in support of their early IRS albums, and watched as the adoration of the British press translated into negligible sales. The springboard was 1987’s Document – producer Scott Litt coaxing bolder vocals from Stipe and a belated hit in The One I Love – and the momentum consolidated by their Warner debut, 1988’s Green.

If R.E.M. had already scaled dizzy heights, the next decade would bring commercial and musical peaks, as the one-two of 1991’s Out Of Time and 1992’s sublime Automatic For The People established them as the only rock band on the planet who were at once thrusting, cerebral and able to sell out stadiums.

In 1994, R.E.M. released Monster, a grunge-endebted album that was sludgier, sleazier and heavier on its feet, made few concessions to fair weather fans beyond the dirty pop of What’s The Frequency, Kenneth? and the pretty Strange Currencies, and, in retrospect, offered the first hints of a decline that was only slowed by 2008's Accelerate.

Genius isn’t consistent, and neither is R.E.M.’s back catalogue, but a record collection without the wit and wisdom of this great band, at their most beautiful, is a dismal thing indeed. These are the ones we love.

As a lesson in how to go stratospheric without selling out your principles, all rock bands could benefit from close analysis of 1992’s Automatic For The People. Ironing out the shinier, happier elements of the previous year’s Out Of Time, R.E.M.’s eighth album married Stipe’s morose lyrics to a bottomless pit of the band’s most irresistible hooks, resulting in a record that made you tap the wheel

and contemplate your own mortality. From the country-infused malcontent of Drive to Everybody Hurts, ushering AFTP onto the podium and dousing it with champagne is practically a formality. View Deal

“Anything crunchy or angular was in, and anything jangly or comfortable was out,” noted Peter Buck of early Document sessions. Not what the band’s paymasters at IRS wanted to hear after four years of commercial inertia.

Sticking to their guns but feeling the pressure, R.E.M. agreed to record with pop producer Scott Litt, who tamed their excesses without airbrushing their quirks, convinced Stipe to enunciate, and extracted hits in The One I Love and It’s The End Of The World As We Know It (And I Feel Fine). Intelligent, challenging, yet rammed with melodies, Document remains the high-water mark of old-school R.E.M. View Deal

R.E.M.’s commercial peak remains a slightly uneven listen. By common consent, the best bits of Out Of Time are simply inspired, with the glorious harmonies of Near Wild Heaven, the resigned beauty of Endgame, the blackened romance of Country Feedback and, of course, Losing My Religion standing shoulder-to- shoulder with anything the band have done before or since.

A shame, then, that stone-cold classic status is denied due to the inclusion of nagging über-hit Shiny Happy People and the white-boy funk of Radio Song. The good outweighs the bad, but it’s an album the ‘skip’ button was invented for. View Deal

Straight out of the blocks, R.E.M. announced their polarity to the 80s rock scene and their graduation from garage punk with a full- length debut that throbs with intelligence and atmosphere.

Dreamlike but never dull, Murmur pushed Mills’ melodic basslines and Buck’s chiming Rickenbacker to the fore (giving Stipe a platform for his semi-coherent vocal freestyling) and achieved mind-blowing results on highlights like the wistful honky-tonk of Perfect Circle, exuberant first single Radio Free Europe and the folk-rock melancholia of Talk About The Passion.

Always fleet-footed, R.E.M. would never record another album quite like it. View Deal

Having fulfilled their IRS contract with Document, R.E.M. completed the transition from esoteric college rockers to heavyweight contenders with a $10 million move to Warners and their first album to bear the major label’s name, Green.

Despite the cash that was thrown at it, and a clutch of unashamed singalongs like Stand, Green wasn’t an overt courting of the mainstream, with Buck’s once-jangly guitar traded for pure heft on Turn You Inside-Out, and Stipe laying himself so bare on tracks like You Are The Everything that you almost feel you shouldn’t be listening. Sometimes swept between the cracks, Green deserves better. View Deal

Whether through the meddling of the label or their own closet ambition, the R.E.M. that emerged on Lifes Rich Pageant [sic] was a different animal to the band who created the drowsy atmospherics on Fables Of The Reconstruction.

Mucking in with no-nonsense rock producer Don Gehman (of John Mellencamp fame) seemed like a mismatch, but he wrung out assertive results on tracks like Begin The Begin and Just A Touch, while cutting Stipe the slack to explore ecological themes on Fall On Me and Cuyahoga. IRS still didn’t feel the album was commercial enough but it’s still a powerful statement. View Deal

If Murmur lived up to its name, then Reckoning turned up the volume. Although Stipe still isn’t letting anyone inside his head – mumbling about bleak things that have happened to other people – the vibe is more vital and energetic, with Buck’s crystalline guitar the cornerstone of the Byrds-like Letter Never Sent, the haunting Camera (perhaps Stipe’s most assertive vocal) and the more traditional country stomp of (Don’t Go Back To) Rockville.

Elsewhere, R.E.M. still sound scared of success – Berry’s anaemic drum sound is frustrating – but there was sufficient quality on this album to ensure that resistance was useless. View Deal

Fables Of The Reconstruction (IRS, 1985)

All change for R.E.M.’s third, as the band decamped to London, took on eminent folk producer Joe Boyd, then looked back across the Atlantic for a faintly sinister folk-rock commentary on the railroads, farm-hands and desolate landscapes of their native American South (despite Stipe’s later claims that none of the lyrics on the first three albums meant anything).

Homesick and fractious, the band laboured over the recording of Fables, and initially hated the results, but over two decades of incubation, they – and we – have come to appreciate its unsettling majesty. Even Stipe has grown to like it. View Deal

Reference to R.E.M.’s tenth album tends to prompt blank faces, essentially because many of the band’s fair-weather fans had been smoked out by 1994’s Monster. To the initiated though, the peripheral place this album occupies in most ‘best R.E.M. album’ discussions is a huge injustice.

NAIHF offers a journeyman charm and some of the band’s most successful experiments, from the sparse trip-hop lollop of How The West Was Won And Where It Got Us, through the impossibly elegant E-Bow The Letter, to the burglar alarm- assisted Leave and big rock moment The Wake-Up Bomb. The last great R.E.M. album? View Deal