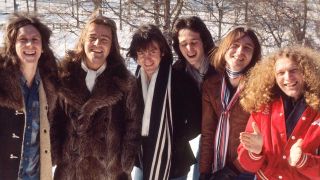 In 1978, shortly after the Sex Pistols had split up, that band’s former singer John Lydon said there was one song from that year that made him jump around like a lunatic.

It was a song written by Mick Jones. But this wasn’t Mick Jones of The Clash, it was his namesake from a band that had nothing to do with punk rock. The song in question was Hot Blooded by Foreigner.

With its meaty riff, thumping rhythm and a gritty lead vocal, Hot Blooded represented the heavy end of Foreigner’s repertoire as a classically styled hard rock band. What they also had was a number of epic power ballads such as Waiting For A Girl Like You and the worldwide No.1 hit I Want To Know What Love Is. As a result, Foreigner became one of the most successful groups of all time, with sales of more than 80 million.

Mick Jones formed the band in 1976 in New York City. They were named Foreigner in jokey reference to the original line-up’s unusual mix of three Brits and three Americans. And among the latter was the singer in whom Jones found his perfect foil: Lou Gramm, whose voice was reminiscent of Paul Rodgers in its blend of soul and power.

Foreigner’s debut album, released in 1977, was an instant hit, selling four million copies in the US and shaping the sound of Adult Oriented Rock. The band’s popularity peaked in the 80s with the albums Foreigner 4 and Agent Provocateur. In the 90s they struggled, with Gramm quitting for a short time, then undergoing surgery for a brain tumour. He eventually left the band in 2003. But Jones, the only ever-present member of Foreigner, would not let go.

In 2005 he brought in a new singer, Kelly Hansen, whose voice sounded uncannily like Gramm’s. For over a decade, Hansen has served the band well. And there was, for Jones and Gramm, a happy reunion, when Gramm joined Mick Jones, Al Greenwood and Ian McDonald onstage for three songs at a Foreigner 40th Anniversary show at Jones Beach Theatre in Long Island, New York.

Foreigner’s fourth album is their masterpiece. Co-produced by Mick Jones and ‘Mutt’ Lange – the latter on a hot streak having done AC/DC’s Back In Black – 4 had a state-of-the-art arena rock sound that made it a seven-million-selling US No.1.

There was heavy rock’n’roll in Nightlife and Juke Box Hero, and a raunchy R&B vibe in Urgent, which featured a wild sax solo from Motown legend Jr. Walker.

And in Waiting For A Girl Like You there was sophistication in its subtle, drifting synthesiser textures, and an extraordinary emotional depth in Lou Gramm’s vocal. Justin Hawkins of The Darkness calls it “the greatest rock ballad of all time”.View Deal

In his early career Mick Jones tasted the high life as a backing musician for French superstar Johnny Hallyday, and enjoyed some success as a member of Spooky Tooth. But it was with Foreigner that he came of age as a songwriter and leading figure.

Foreigner’s first album was launched at an opportune time. While punk rock was big news in 1977, the year’s biggest-selling acts included Fleetwood Mac, Peter Frampton and Boston; the radio-friendly rock of Foreigner was a perfect fit.

The LP yielded two US Top 10 hits in Feels Like The First Time and the spine-tingling Cold As Ice. Along with Boston’s debut, released a year earlier, it’s a seminal AOR album.View Deal

Many bands have fallen victim to what Americans like to call ‘the sophomore slump’. Not so Foreigner. With their second album, another piece of US music business jargon applied: Double Vision was a monster hit that ‘sold out of the box’.

With Jones and Gramm in the groove, they were unstoppable. Double Vision sold five million. It was also the last album made by the band’s original line-up.

The former Johnny Rotten was not alone in digging Hot Blooded. The song powered to No.3 in the US, and the album’s title track went one better, denied the top spot only by Donna Summer’s remake of MacArthur Park.View Deal

Strangely, for a band as classy as Foreigner the cover of their third album Head Games was anything but: a picture of a teenage girl in a men’s toilet, appearing threatened. There are worse album covers, but not many.

For all that, Head Games was another huge hit and includes some great material. Although producer Roy Thomas Baker was famed for his work on Queen’s grandiose mid-70s albums, Head Games is a tough, no-frills hard rock record.

For the follow-up to 4, Mick Jones co-produced with Alex Sadkin, who had worked on hits for Grace Jones and Duran Duran. The result was an album on which the Foreigner sound was cleverly expanded.

Tooth And Nail, the heaviest song the band ever recorded, had a clanking edge that prefigured industrial rock. At the other extreme was I Want To Know What Love Is, essentially a soul ballad, built on an atmospheric keyboard riff and lifted to its climax by a gospel choir.

Best of all is the album’s other hit and Foreigner’s most heartbreaking song, That Was Yesterday.View Deal

When Lou Gramm quit Foreigner in 1990 he formed a new band, Shadow King, with former Dio and Whitesnake guitarist Vivian Campbell. The project was short-lived, but the one album they left behind is a genuine cult classic.

Completing the line-up were drummer Kevin Valentine and bassist Bruce Turgon, a veteran of Gramm’s pre-Foreigner band Black Sheep. What they created was an album majoring on ballsy, riff-driven hard rock anthems.

Shadow King had some great songs, notably I Want You, reminiscent of vintage Foreigner. But when Campbell bailed to join Def Leppard it was over.View Deal

It was with this album that Foreigner’s golden age ended. Inside Information sold a million in the US, where two of its singles reached the Top 10, but at this point the key partnership between Jones and Gramm was faltering.

The hit singles were brilliant: Say You Will wasa slick rock track with a killer hook, I Don’t Want To Live Without You an elegant, understated ballad. Among the album’s deep cuts was the slow-burning hard rock of Can’t Wait, a throwback to the band’s early days.View Deal

In the late 80s, Lou Gramm made two solo albums while still in Foreigner. Mick Jones also made one, self-titled and released in 1989. Jones’s record was good, but Gramm’s were better.

Ready Or Not arrived in 1987, just a few months ahead of Foreigner’s Inside Information. In reaction to the smooth sound Jones imposed upon the band, Gramm delivered a straight-shooting rock’n’roll record, typified by its rowdy title track. And Midnight Blue, a great pop-rock song, was a major US hit.

In 2014, Mick Jones told Classic Rock that when he brought in Kelly Hansen as the singer in Foreigner in 2005 the band were “reborn”. He wasn’t bullshitting. And Can’t Slow Down is proof of that.

It was Foreigner’s first new album since 1994’s Mr. Moonlight, on which Gramm’s comeback had fallen flat. Jones and Gramm may have lost the spark between them, but the new partnership with Hansen led Jones to rediscover his mojo.

Can’t Slow Down had a punchy title track that evoked the glory days of Foreigner, as did the subtle ballad In Pieces. To date it’s the only studio album the band have made with Hansen. They really should do another.View Deal