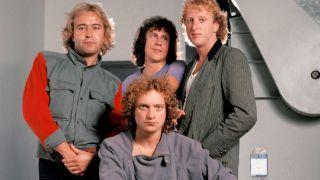 The story behind the song: I Want To Know What Love Is by Foreigner

Insomnia had its benefits for Mick Jones in the 80s. As night fell on the circus his life had become since Foreigner released their all-conquering album, 4, in 1981, the guitarist found himself with room to breathe and time to write.

“I always worked late at night, when everybody left and the phone stopped ringing,” Jones recalls. “I Want To Know What Love Is came up at three in the morning sometime in 1984. I don’t know where it came from. I consider it a gift that was sent through me. I think there was something bigger than me behind it. I’d say it was probably written entirely by a higher force.”

As he sat at the keyboard in the studio of his Kensington apartment, Jones couldn’t decide if his heart was half-empty or half-full. “The song was an expression of my tempestuous private life over the three years before,” he says. “I’d been through a divorce, and met someone else who I was going to marry. There’d been turmoil in the band through the huge pressure of selling millions of albums, and me and Lou [Gramm, vocals] were entering a cold-war situation. I’d just come back to England from New York and was happy to be in touch with my roots. So it was an emotional time that stirred up a lot of things.

“That night I only managed the title, the opening chords and the chorus,” Jones adds, “but that was enough to make me go into the bedroom where my soon-to-be wife was asleep and tell her I had an idea for a song called I Want To Know What Love Is. She just fixed me with this strange look and said [offended]: ‘What do you mean? Don’t you already know what love is?’. I dragged her into the studio to hear it, which must say something. You always know when you’ve got something strong, and this song definitely moved me.”

Jones was happy enough with the song to hand it over to Gramm, bassist Rick Wills and drummer Dennis Elliott for Foreigner’s forthcoming Agent Provocateur album. “But I was still looking for ways to enhance it in a spiritual way,” he remembers. “I’d even considered approaching Aretha Franklin.

“In the end I was having lunch with a guy who ran a gospel music label. He sent me a bunch of albums, and one was by the New Jersey Mass Choir. When I heard them, I immediately had the finished song in my head. So I drove out to New Jersey and watched them in rehearsals, and it sounded fantastic. They were fresh; they’d never recorded a mainstream album before.”

It would take one more divine intervention to get I Want To Know What Love Is down on tape. “We got about 30 of the choir into the Right Track studio in New York,” explains Jones. “We did a few takes, and it was good, but it was still a bit tentative. So then they all got round in a circle, held hands and said The Lord’s Prayer. And it seemed to inspire them, because after that they did it in one take. I was in tears, because my mum and dad were in the studio too, and it was so emotional.”

Even the number-crunchers at Atlantic Records couldn’t resist the emotional power of I Want To Know What Love Is.

“Ahmet Ertegün, the late president of Atlantic, had always been my mentor,” Jones recalls. “I invited him down to the studio one night, closed the door and said: ‘Look, I just want to play you one song and hear what you think.’ This is somebody who discovered Ray Charles and Aretha Franklin, so his opinion was quite important. So we sat there and listened, and after the first chorus I looked over in his direction and tears were rolling down his cheeks. I thought: ‘My God! I’ve done it!’ He was away with the music’.”

The release of I Want To Know What Love Is, at the end of 1984. confirmed that, for better or worse, this most personal of late-night confessionals had struck a universal chord.

“It was No.1 worldwide,” Jones says, “and I doubt there are many people who haven’t heard it. It was played on the radio all around the world. And I started getting letters from people who weren’t necessarily fans but had found comfort in that song at times of suffering and sadness. Everybody took their own meaning from it. And that’s all you can hope for as a writer.”

Indeed the only dissent came from within Foreigner, with Gramm bemoaning the band’s new public perception as balladeers, and publicly disowning the song that earned them it.

“He started to say that later,” Jones recalls. “I think it was to do with him wanting to break away from the band, and he chose that as something to talk about.

“The truth is, there were softer songs on past albums. But, as it was Christmas, the label wanted to release I Want To Know What Love Is. If we’d gone with a different first single it would have been interpreted differently. But I was always very proud of it, and thankful I was able to write it.”