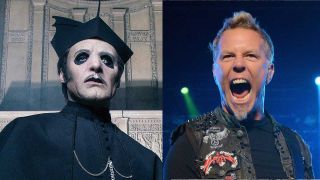 Ghost have have Metallica in their corner since the beginning, and this summer sees the Swedish occultists hitting the road as support to Papa Het and co. As part of our massive 2019 preview in the brand new issue of Metal Hammer – out now and featuring a world exclusive interview with Ozzy Osbourne on the cover - we asked Ghost main-thing Cardinal Copia – aka Tobias Forge – to choose his fantasy Metallica setlist. This is the soundtrack to his night out…

Intro: The Ecstasy Of Gold

“It is such a great opener. They’d play it as they did on the Master Of Puppets tour; the intro is recorded and they arrive and launch into that riff.”

“They used to open with this a lot, and I’m sticking it in the set early. They’ve not played it as much recently, so I’m bringing it back.”

3.Of Wolf And Man

“I’m not sure they play this very often. But I love it, especially that howling midsection. That’s a great crowd-participation part.”

“They’ve put this early in the set for years. It works brilliantly after Of Wolf And Man as a cleanser, as we’re about to go into a Ride The Lightning extravaganza…”

7. For Whom The Bell Tolls

“This is a very special part of the set. Playing side-A of Ride The Lightning in full. Culminating in Fade To Black, which brings the pace down a little, but it’s a really important song in Metallica’s career. It showed even that early, they were willing to go to places that their peers were not.”

“I’m not the biggest fan of …And Justice For All, but I wanted to have this in there. And this would just lift the place up again.”

“I really didn’t like the more rock’n’roll and blues-based material that Metallica went on to do, so I’ve kept quite far away from that period. But even I have to admit that this is a brilliant song, even though it’s from an album that I am really not a fan of.”

“I’ve created a very specific setlist that leans heavily on the period of Metallica I have most fondness for, namely the first five albums.”

“This would end the first part of the set on a high. We’re going out with two true heavy metal classics here.”

“At this point, Am I Evil? is basically a Metallica song. It’s also very important to show Diamond Head’s influence on Metallica.”

“This has been a very dark and doomy Metallica set, so I wanted to have a brighter and more fun song, which this is… obviously despite the lyrical content!”

“The all-time greatest banger you can have. You can say whatever you like, but you can’t argue with this song.”