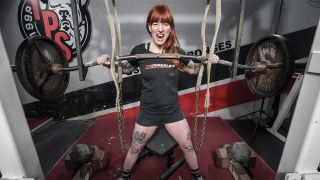 Walls Of Jericho’s nails-throated frontwoman Candace Puopolo explains how power lifting has helped her mind and her body.

When did you first realise training was a big part of your life, Candace?

“Walls Of Jericho did Ozzfest 2006, where everybody was deadlifting barbells from the floor up their legs backstage. I wasn’t as strong as I thought I’d be so that gave me a challenge and that started me off. I did my first powerlifting meet four months after I had my daughter in 2011 and I was sold – I’d never competed in any sports before, so the environment was a whole new world for me. Now I get to coach at the powerlifting gym that I also train at.”

How does the powerlifting world compare to the music industry?

“There’s a lot less politics in powerlifting and you don’t have to rely on other people because your training and determination prepares you, whereas in music you have to depend on a label and people buying your records. It’s a lot like the hardcore scene because it’s more underground – not everybody’s cut out to do it. Just as bands know what it’s like to sleep on floors and drive for hours to play shows, everyone’s at a lifting meet for the same reason and you’ve worked very hard to be there. You grind because you love it.”

What issues have you faced as a woman in the lifting world?

“I’ll admit that when I was younger, I would go into the gym with a completely different goal because my main concern back then was aesthetics, what the scales said and what size pants I wore. It’s a very difficult thing to tackle as a female growing up in a society which puts so much pressure on looking a certain way, but going into the gym with a goal to empower myself now is much healthier and more sustainable.”

What has been your proudest moment so far?

“For a few years, I’ve attended a Relentless Powerlifting meet to raise money for children with cancer and life-threatening illnesses. Through talking about it onstage and through lifting, we’ve been able to raise thousands of dollars and make a real difference in the world by coming together to lift twice a year.”

Do you find training has improved your mental health?

“I’m constantly striving for a better version of me to make life less stressful. Part of my training is being able to manage stress levels which is a wonderful thing I’ve learned. Before powerlifting, I took everything on my shoulders and I thought I could handle everything, but through this I learned to let things go, too.”

How do you stay fit on tour?

“It’s hard to get enough food in every day, so I’m always wondering where I’m going to get protein and carbs even when I pack my bag with oatmeal bars, protein and peanut butter. We usually put on our rider that we need to know the nearest gym to the venue we’re playing.”

“I’ve probably hurt myself more onstage than I have powerlifting. I’ve never needed surgery because I have good coaches and people around me to help me keep moving. I was being a meathead once and I lifted as heavy as I possibly could and I pulled my sacroiliac joint so I had to get it popped back into place. I’d rather injure myself doing something cool like deadlifting 325lb than lifting a laundry basket at home!”

On a scale of 1-10, how metal is having a love of powerlifting?

“Definitely 10! Anybody who does this and dedicates themselves to it without giving up is super-badass to me. I do it because I love it and I think it’s badass!

Walls Of Jericho's latest album No One Can Save You From Yourself is out now and available to buy from Amazon.

Walls Of Jericho – No One Can Save You From Yourself
This is a ‘fuck you’ to anyone who ever stood in the Detroit mob’s way, as invigorating as it is defiant, and hits harder than a battering ram made of biceps.View Deal