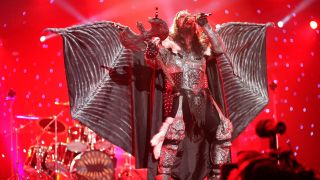 April is upon us and the gigs are coming thick and fast in the run-up to summer (how the fuck did that get so close?!). Here’s some of the best this week…

Of Mice & Men: Glasgow, Barrowland Ballroom, Monday 30th March The band leading the charge for a whole new generation of metal bands, and recent Hammer cover stars, continue their UK tour this week hitting up Barrowland Ballroom. From headlining The Pit at last year’s Reading festival and damn near upstaging Linkin Park as support on their arena tour, OM&M have proved themselves a formidable live band and one that you don’t want to miss.

Reign Of Fury: Cardiff, Fuel, Saturday 4th April They may have formed as part of a drunken idea in a Cheltenham pub as a love letter to ‘80s thrash, but it turned out to be one bloody good idea! Having won over plenty of fans at Bloodstock and the charity Headbanger’s Balls gigs, you’re sure to witness a stellar thrash show if you’re in Cardiff this Saturday.

Laibach: Manchester, Academy 2, Friday 3rd April The Slovenian industrial avant-garde band, who were one of the biggest influences on Rammstein, remain an enigmatic proposition. With a unique sound, image and approach to everything they do they have inspired awe and wonder for over twenty years. The band hit our shores this week in support of last year’s Spectre.

Lordi: Chester, The Live Rooms, Friday 3rd April Everyone’s favourite former Eurovision contestants, no not Jedward, no not Conchita Wurst either! We’re talking about the band of monstrous figures that hail from Finland and took the Eurovision gold in 2006 with Hard Rock Hallelujah. Now Mr Lordi and his fellow monster men are back to put on a rock show that is sure to be a lot more entertaining than a pair of hyperactive Irish twins or a bearded lady.

Therapy?: Brighton, Concorde 2, Tuesday 31st March Although best known for their ‘94 debut Troublegum, the Irish punks that are Therapy? remain to go strong with the recent release of their fourteenth album Disquiet. Expect a night packed with hits old, new and everything in between as Andy Cairns and co steamroll their way through Brighton this week.

Moonspell: London, Underworld, Thursday 2nd April The nights may be getting brighter again, but it’s not all sunshine and ice cream just yet. This week sees Moonspell hitting the Underworld to plunge the venue into darkness with their haunting gothic metal. Armed with new album Extinct, a number one in their homelands of Portugal, you should put that Calippo down and get yourself along to this show on Tuesday.

Dave Lombardo Masterclass: Belfast, Voodoo, Thursday 2nd April Struggling to know your flams from your paradiddles? We know a guy that might be able to help you out. How about former Slayer sticksman and metal drummer legend Dave Lombardo? He’s going to be at Voodoo this Thursday for an evening of discussion, music and the man himself doing all sorts of fancy stuff on his kit to make us gawp in admiration.

Alunah: Dublin, Gypsy Rose, Saturday 4th April The Birmingham-based doom metal band have been carving their path for over nine years, and they say it has led to them to becoming a unique proposition in their own right. Instead of being part of any particular scene, the West Midlands four piece state they merge elements of doom, psych and classic heavy rock with earthy hypnotic vocal melodies. Now is your chance to check it out first hand at the Gypsy Rose this Saturday.