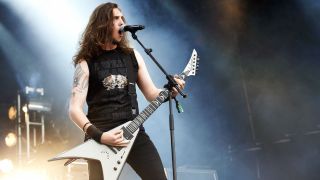 Those rotten clouds completely ruined last week’s total eclipse, didn’t they? So what better way to forget about your solar disappointment than enjoying some loud riffs in the company of likeminded people?

Scotland North of the Wall Festival Glasgow, The Classic Grand, Saturday 28th March The sun is making sporadic experiences, and having a beer at noon is slowly becoming more acceptable, which must mean we’re entering festival season. The North of the Wall all-dayer combines the best of both worlds by having a day full of drinking and metal, without having to debate whether you pack wellies or not. Now in it’s third year, this year sees Gama Bomb headline, as well as a line up including Bolzer, Fen, Mael Mordha and many more.

Wales Create To Inspire **Swansea, The Scene, Wednesday 25th March **Create To Inspire are one of the most promising up and coming hardcore bands in the UK. The Essex five-piece impressed Martyr Defiled’s Matthew Jones enough for him to start managing them, and they can also count While She Sleep’s Loz Taylor amongst their ever growing fan base. Head along to The Scene this Wednesday to see what is getting everyone so excited first hand.

The North Rival Sons Leeds, O2 Academy, Saturday 28th March Supporting the likes of Alice Cooper and AC/DC early on in their career has done wonders for Rival Sons. The California four-piece’s breed of hard rock has been winning over more and more fans over the years, with last year’s Great Western Valkyrie gate-crashing the UK top 20 album chart. Now Jay Buchanan and co return to our shores for shows that’ll prove they can put on a big rock show in their own right as well.

The Midlands Karnivool **Nottingham, Rescue Rooms, Wednesday 25th March **Everyone’s favourite environmentally-conscious Australian prog band return to our shores this week to show why they’re truly one of a kind. The Perth five-piece are a chart topping, award winning proposition in their homelands down under. Now is your chance to catch one of the most exciting bands in the world of contemporary prog live as they hit Nottingham Rescue Rooms this week.

London Evile **London, Underworld, Saturday 28th March **The career of Evile has been something of a rocky road, but they’re a band that have always persevered. It’s been an awfully long wait for us to catch them live, but this weekend they return for their first show since 2013 with new guitarist Piers Donno-Fuller in tow at Camden’s Underworld. We can’t wait to welcome them back with a night of head banging, it’s going to be a good one!

Northern Ireland Quireboys **Ballymena, Diamond Rock Club, Saturday 28th March **The band that people were once calling ‘Britain’s answer to Posion’ hit the road this week in support of their new album St Cecilia and the Gypsy Soul. With it being the ninth album under their belt, and having toured with the who’s who of glam and hard rock over the years, The Quireboys have more than enough experience to guarantee you one belter of a show.

Ireland Coltsblood Dublin, Gypsy Rose, Friday 27th March Candlelight Records trio Coltsblood have been inspiring equal amounts of terror and delight into people for a good few years now with their Liverpudlian Doom Metal. Their debut Into The Unfathomable Abyss proved they’re one of the genre’s most exciting up and coming bands. This Friday they’re sure to only win over more fans as they play Dublin’s Gypsy Rose. If you haven’t had a chance to catch them yet, now’s the time to change that.