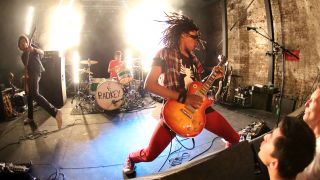 This week’s recommended gigs are here to rip new hole in your ears. Don’t say we didn’t warn you.

Hawkwind: Glasgow, O2 ABC, Wednesday 4th March Being one of the pioneers of space rock, a career that stretches six decades and a discography that includes 29 albums, Hawkwind have achieved things most bands can only dream of. Even more impressive is they’re still going strong and putting on incredible rock shows, so get yourself along to Glasgow this week for another killer set from these bonafide legends.

Lonely The Brave: Cardiff, Clwb Ifor Bach, Wednesday 4th March Off the back of their co-headline tour with Marmozets last year, Lonely The Brave got a lot of tongues wagging with regards to them being another example of British rock heading in a very good direction. Their sound - which they describe as ‘doom-pop’ - sees them create absolutely colossal soundscapes that could potentially see Cardiff’s Clwb Ifor Bach shaking at the sheer force of the power.

Radkey: Manchester, Night & Day Café, Friday 6th March Channelling the likes of Misfits and Black Flag, the three fresh faced teenage brothers that make up Radkey are a breath of fresh air for all those out there who like their punk in the truest sense of the word. A welcome alternative to the punk bands that are more about selling t-shirts from their guitarist’s clothing line rather than raising hell, this one-off show is sure to be a lot of fun.

In This Moment: Wolverhampton, Civic Hall, Wednesday 4th March With a stage show to rival the most lavish of West End productions, Maria Brink and her cohorts return to our shores this week. With a show that’ll provide far more spectacle than some bloke with long hair playing guitar in front of a bland backdrop, In This Moment are keeping the spirit of larger then life rock shows alive, and it’s something you’ll want to check out for yourself at the Civic Hall this week.

Takedown: Southampton, Southampton University, Saturday 7th March Festival season officially kicks off with Takedown this weekend. Returning to Southampton Uni for a whole day packed full of bands and maybe even one or two drinks if you fancy it. This year’s line-up includes the likes of Heart of a Coward, Bleed From Within, Baby Godzilla, Devil Sold His Soul, The Hell and a whole host of others.

Weedeater: London, The Underworld, Sunday 8th March The North Carolina stoner metal heroes return to London this week, for an evening of heavy groove and head banging in support of their forthcoming album God Luck and God Speed. The smoke enthusiasts will be joined by an array of bands with similar interests in the form of Opium Lord, Tombstones, King Parrot and Dead Existence.

The Answer: Belfast, Limelight 2, Friday 6th March The Answer return this week with their Raise A Little Hell tour, and our money is on them raising more than just a little hell. Playing material off their forthcoming album of the same name as well as their packed back catalogue of hip-shaking rock’n’roll, it’s certainly good to have the Irish hard rockers back and doing what they do best.

Ireland Death DTA: Dublin, The Academy, Tuesday 3rd March The project that started in honour of sadly departed Death frontman Chuck Schulinder, the man who along with his bandmates is pretty much responsible for starting death metal as a genre, has proved to be a fitting tribute to the legend that he was. Seeing a whole host of Death alumni joining forces to play a set of choice cuts from Death’s stellar back catalogue, it’s the perfect way to celebrate such an important metal legacy.