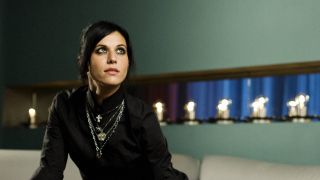 In celebration of Halloween, we chatted to gothic metal royalty – Lacuna Coil's leading lady, Cristina Scabbia – about the greatest horror films from her home country of Italy.

"When I was growing up, you could watch horror movies on TV at night. That’s obviously exciting for a kid, and it’s how I first got into Italian horror films.

"Italy is a very conservative, Catholic country, so it’s a little surprising that we have such a reputation for making these types of films. But perhaps that’s exactly why it happened.

"If you’re brought up in a strict way, then you want to rebel against authority, which is what horror directors might have been doing with the things they were showing on screen.

"I would love to get involved with a horror film soundtrack. I’ve always felt that Lacuna Coil’s music is very visual anyway. Dario Argento is my favourite horror director, so to have the chance to work with him would be amazing.

"There are so many great Italian horror films. So, to try and narrow it down to a few favourites is tough. But these are the seven films which have stood out for me, in one way or another…"

"This is probably Argento’s most famous film. What I love about this are the dresses a lot of the characters wear. They are wonderful. And there is a real eeriness throughout.

"You also appreciate how the combination of camera work, music and lighting can make something as mundane as a walk through an airport at the start of this film come across as frightening. You jump when the doors swish open! I’m not convinced by the ending, though. It could have been better."

"Everyone who’s seen this remembers the scene where there is a swimming pool full of maggots and body parts! That makes an impact you don’t forget. Another great Argento movie, this is about a girl who has special powers over insects.

" Jennifer Connelly plays the girl, which is very cool. It was before she became really famous. The soundtrack is from Goblin again, and you also hear Flash Of The Blade from Iron Maiden a few times throughout the movie. There’s also Motörhead’s Locomotive in there, too."

"This was directed by Lamberto Bava and produced by Argento. It’s a mid-80s horror film within a horror film, really, About a group of people who go to the cinema to watch a movie about a group of teenagers who dig up an old coffin, and one of them is possessed by an evil spirit, and kills the others.

"Then it starts happening to the people watching the film, as they turn into demons. It’s great fun, and the idea of life imitating what’s happening on the screen is quite scary, actually. It definitely holds your attention throughout. There was a sequel as well."

"Again directed by Lamberto Bava, this has a spree of gruesome murders, starting with a policeman’s wife. The plot is good enough to hold your interest throughout, and there are enough twists and turns to keep the identity if the real killer hidden until the end.

"There’s a nasty scene when someone is killed with an egg whisk as well. I promise you will never use one of these again, without shuddering just a little. Claudio Simonetti, Goblin’s main man, composed the music, and it’s very clearly in the Goblin style. But that works, because the whole film is something of a tribute to Argento"

"This was directed by Pupi Avati. It’s about an artist, Stefano, hired to restore a painting on the rotting wall of a church. But he finds out that the original artist and his two sisters were insane and went on a brutal torture and killing spree in the village, which had given him the inspiration for the original painting.

"But as the restoration goes on, people are being horribly murdered around Stefano. Just why this is happening and who is behind it gives the film a nice twist ending. He discovers that… oh no, I’m not gonna spoil the fun for people who’ve not seen this before!"

"There have been a few infamous ‘cannibal’ movies made by Italians. This one was done by Ruggero Deodato. When it was finished, there were reports that it was a snuff movie, and the four main actors had died during the filming. Doedato was actually charged with murder and put on trial.

"He had to get the four actors to do interviews to prove they were alive, and he also had to show the court how certain gruesome scenes were done. The charge was dropped. But for years, only heavily censored versions of this film were ever officially available. If you wanted to see an uncut version, you could only get it through underground sources."

"This is my number one film. I love everything about it. The plot is interesting for a start. A lot of horror movies rely on the shock factor to make the impact, and forget about the storyline. But that’s not what happens with Profondo Rosso (which translates as Deep Red).

"There’s also a great twist at the end! Daria Nicolodi, who plays the lead female role, is excellent. I think at the time she was going out with Argento, who directed this. They had an on off relationship for a long time, and she was his muse. The music from Goblin is also great. I gather they performed the soundtrack live last year in London, while the film was being screened. I would love to have seen that!"